KYIV, Ukraine - Russia and Ukraine said Wednesday that they were prepared to hold talks for the second time since the Russian invasion of its neighbor began last week.

The talks are expected to take place Thursday in Belarus, though there appears to be little common ground between the two sides. They were announced the same day that the U.N. General Assembly condemned the invasion and called on Russia to withdraw its troops from Ukraine.

Meanwhile, Russia's assault on Ukrainian cities continued, including Russia's disputed claim to have taken control of its first major city, Kherson, and a strike on Ukraine's second-largest city, Kharkiv, that led one official to call Kharkiv "the Stalingrad of the 21st century."

The human toll of the war kept mounting, too, with the number of Ukrainians who have fled from their homeland expected to reach 1 million soon.

Here's a look at key things to know about the conflict:

The Ukrainian president’s office said Wednesday evening that the country’s delegation was on its way to the second round of talks with Russia since the invasion began, but it didn’t say when it was expected to arrive.

Vladimir Medinsky, Putin’s aide and the head of Russia's delegation, told reporters that the Ukrainians were expected to arrive Thursday for the talks in the Brest region of Belarus, which borders Poland.

Ukrainian Foreign Minister Dmytro Kuleba said earlier Wednesday that his country was ready for talks to resume, but he noted that Russia’s demands hadn't changed and that he wouldn’t accept any ultimatums. 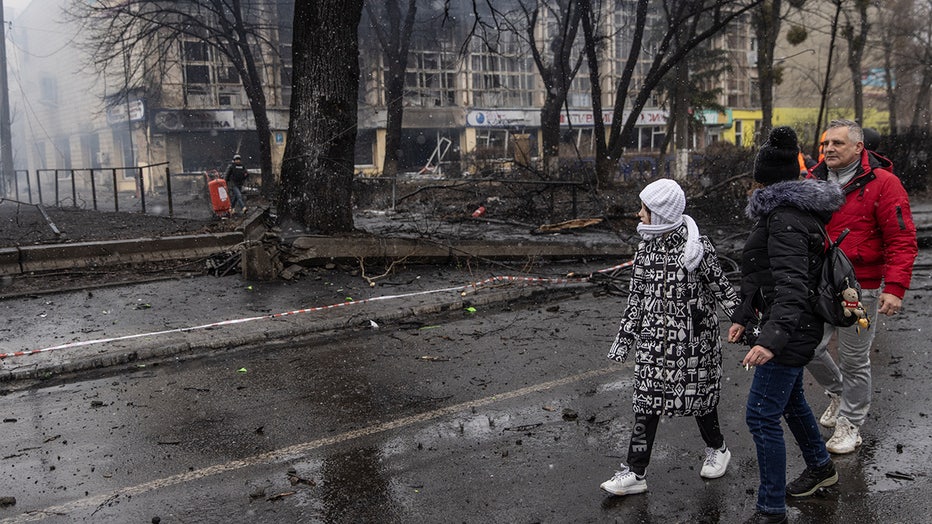 People walk past a damaged building across the street from the Kyiv TV Tower on March 02, 2022 in Kyiv, Ukraine. (Photo by Chris McGrath/Getty Images)

A Russian official said troops took control of the coastal city of Kherson — a claim the Ukrainian military denied.

Igor Konashenkov, a Russian Defense Ministry spokesman, said Wednesday that the key Black Sea port city of nearly 300,000 people was under Russia's "complete control," and that talks were underway between Russian commanders and city and regional authorities over how to maintain order.

The Ukrainian military denied the claims, which couldn't immediately be verified. Kherson was one of at least three cities that Russian troops had encircled as of Tuesday, along with the coastal city of Mariupol and Kharkiv, in northeastern Ukraine.

RELATED: How sunflowers, Ukraine's national flower, became a symbol of solidarity and resistance

Russia's assault on Kharkiv, which has nearly 1.5 million residents, continued with a strike on the regional police and intelligence headquarters, and a university building across the street, according to the Ukrainian emergency service and government officials. Explosions also happened in a central square near other government buildings, including the city council's.

Oleksiy Arestovich, an adviser to Ukrainian President Volodymyr Zelenskyy, said an advance of Russian troops on Kharkiv was stopped, so Russia shelled the city with rockets and airstrikes in response.

"Kharkiv today is the Stalingrad of the 21st century," said Arestovich, who added that several Russian planes were shot down over the city.

Oleg Sinehubov, head of the Kharkiv regional administration, said 21 people had been killed and at least 112 had been wounded over the previous 24 hours. 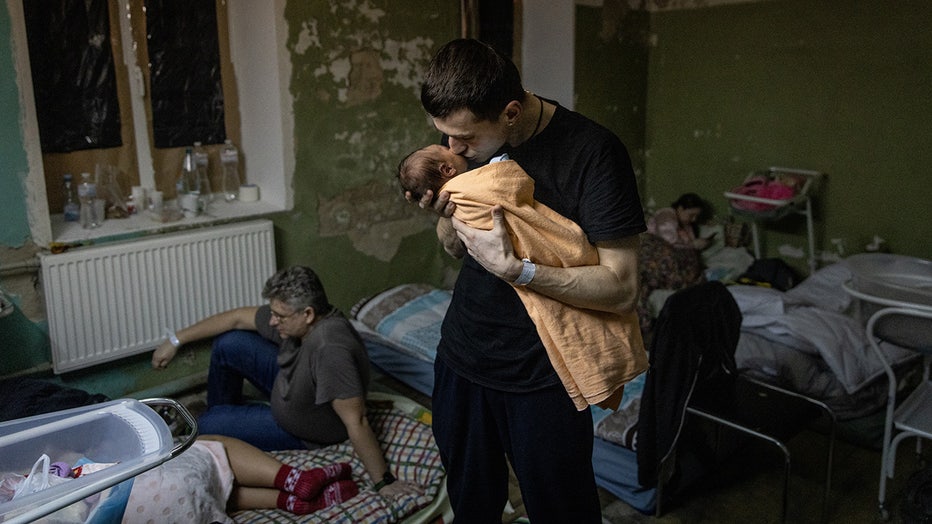 A man holds a newborn child in the bomb shelter of a maternity hospital on March 02, 2022 in Kyiv, Ukraine. (Photo by Chris McGrath/Getty Images)

What about violence elsewhere?

Russia reported its military casualties for the first time since the invasion began last week, saying nearly 500 of its troops had been killed and almost 1,600 wounded. Ukraine insisted Russia’s losses were far higher but did not immediately disclose its own.

Russia's 40-mile-long (64-kilometer-long) convoy of tanks and other vehicles remained outside of the capital, Kyiv, which continues to be struck by shelling.

Zelenskyy’s office reported a powerful explosion Wednesday night between the Southern Railway Station and the Ibis hotel in Kyiv. Ukraine’s Defense Ministry is located near that area. Ukrainian Railway Service said at the time of the strike, thousands of women and children were being evacuated from the station, which suffered only minor damage. It was still looking into whether anyone was hurt or killed. 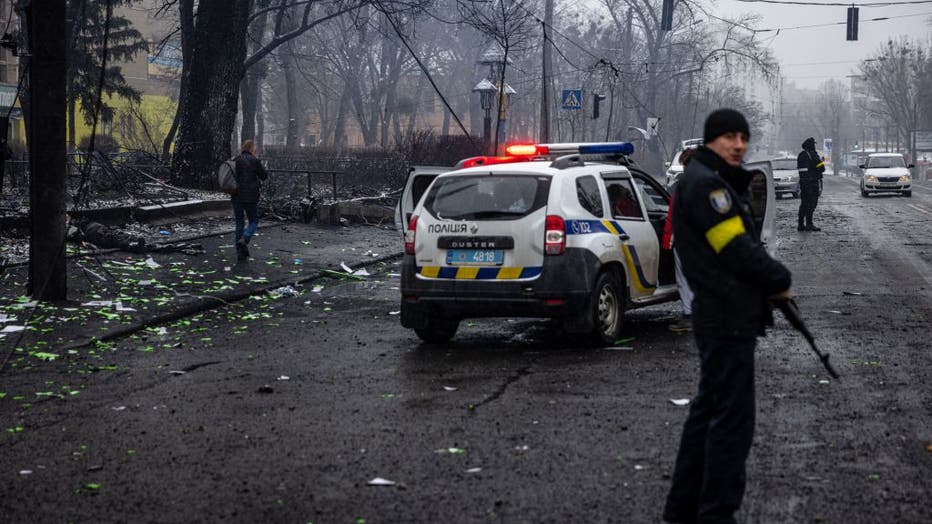 Meanwhile, two cruise missiles hit a hospital in the northern city of Chernihiv, the Ukrainian news agency UNIAN quoted the city's chief health administrator, Serhiy Pivovar, as saying. The hospital’s main building was damaged and authorities were working to determine the casualty toll, he said.

And in Mariupol, at least one teenager died and two more were wounded by apparent Russian shelling. The boys’ families told The Associated Press the attack came while they were playing soccer near a school.

Arestovich said Wednesday that Russian troops were stopped at the entrance to Energodar, where the Zaporizhzhia nuclear plant is located, and that local authorities were negotiating the plant's safety.

What is the humanitarian situation?

Ukraine’s State Emergency Service said more than 2,000 civilians have died, though it was impossible to verify the claim. The U.N. human rights office said it had recorded the deaths of 136 civilians, including 13 children, in Ukraine since the Feb. 24 start of the invasion.

The EU Commission said Wednesday that it will give temporary residence permits to refugees fleeing the violence and allow them study and work in the 27-nation bloc. The move would need the approval of member states, but they've already expressed broad support for the idea.

Save Our Allies is sending special operations veterans and medical teams to set up field hospitals in Poland and Romania, assist with bringing medical supplies to Ukraine, the provision of emergency operational medical support, and the evacuation of American Citizens, children, and the elderly/disabled over the border. Save Our Allies will be on the ground for as long as there is a critical need.

The U.N. General Assembly voted Wednesday to demand that Russia stop its offensive in Ukraine and withdraw all troops, with nations from world powers to tiny island states condemning Moscow. The vote was 141 to 5, with 35 abstentions. It came after the 193-member assembly convened its first emergency session since 1997.

Assembly resolutions aren’t legally binding, but they do have clout in reflecting international opinion. The resolution deplored Russia’s "aggression" against Ukraine "in the strongest terms" and demanded an immediate halt to Moscow’s use of force and the immediate and complete withdrawal of all Russian forces.

Meanwhile, the International Criminal Court’s prosecutor opened an investigation Wednesday into possible war crimes, crimes against humanity or genocide in Ukraine dating back to 2013 but also covering the current conflict.

Prosecutor Karim Khan said he launched the probe after 39 of the court’s member states requested an investigation, a process known as a referral.

Speaking to the United Nationals General Assembly, the Ukraine Ambassador to the UN said Russia has come to deprive Ukraine of it's "right to exist" and described some of the atrocities soldiers have committed during the invasion. The ambassador described one missile strike which destroyed the Ukraine Holocaust memorial and called it "ironic" that victims of Nazis are being killed a second time by people who follow the same mode as Nazis.

Are the sanctions hurting Russia?

Russia has found itself increasingly isolated, hit by sanctions that have thrown its economy into turmoil and left the country practically friendless, apart from China, Belarus and a few other countries.

Leading Russian bank Sberbank said Wednesday that it was pulling out of European markets amid tightening Western sanctions. The bank said its subsidiaries in Europe were facing an "abnormal outflow of funds and a threat to the safety of employees and branches," according to Russian news agencies.

A day after U.S. President Joe Biden vowed to check Russian aggression during his first State of the Union address, the White House announced additional sanctions against Russia and Belarus, including extending export controls that target Russian oil refining and entities supporting both countries’ militaries.

The West’s sanctions and resulting crash of the ruble have left the Kremlin scrambling to keep the country’s economy running. Putin got some good news Wednesday when the head of China’s bank regulator said China wouldn't impose financial sanctions on Russia. China is a major buyer of Russian oil and gas and the only major government that has refrained from criticizing the Ukraine invasion.

What about the sanctions on Russia's ultra-rich?

The war has sent shock waves through the global community of wealthy Russians, who face sanctions that threaten their London mansions, Mediterranean yachts and children’s places at elite European private schools. Some have begun, albeit tentatively, to speak out — though it may be too little to end the war, or to protect their Western fortunes.

In a stunning sign of the invasion's repercussions on Russia's business elite, Chelsea owner Roman Abramovich confirmed Wednesday that he's trying to sell the Premier League soccer club that he turned into an elite trophy-winning machine with his lavish investment.

Pressure has been growing on the British government to include him among the wealthy Russians to be targeted by sanctions.