KYIV, Ukraine - The battle for Ukraine's strategic port of Mariupol raged on Monday, as Ukraine rejected a Russian offer to evacuate its troops from the besieged city. Russian bombardment continued to hit it and other cities in Ukraine.

Ukrainian President Volodymyr Zelenskyy said about 400 civilians were taking shelter at an art school in the Sea of Azov port city when it was struck by a Russian bomb.

Warning that relations with the U.S. are "on the verge of a breach," Russia has summoned the U.S. ambassador to protest President Joe Biden’s criticism of Russian President Vladimir Putin.

Russia's war in Ukraine, now in its 26th day, shows no signs of abating. The invasion has wreaked devastation, exacting a heavy toll on civilians. The U.N. says nearly 3.4 million people have fled Ukraine.

What is the latest in Mariupol?

The key port city has seen some of the heaviest fighting since the Russian invasion. Russian and Ukrainian soldiers are fighting block-by-block for control of the city where at least 2,300 people have died, some buried in mass graves.

Ukrainian officials rejected a Russian offer that its troops be granted safe passage out of the encircled city, which would hand Mariupol over to Russia, uniting Russian forces in southern and eastern Ukraine along the Sea of Azov. 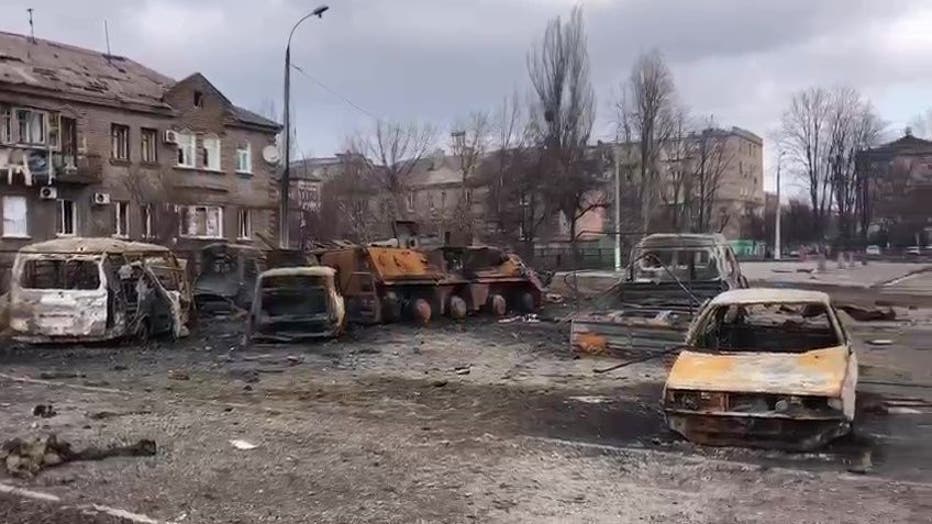 A screen grab captured from a video shows destroyed buildings and vehicles after Russian attacks in Mariupol, Ukraine on March 21, 2022. (Photo by AA/Anadolu Agency via Getty Images)

It was not clear how many casualties there were in the Russian bombing of the art school, Zelenskyy said in a video address early Monday. That attack came just days after a bomb hit a theater Wednesday in Mariupol where more than 1,000 people were believed to be sheltering. It was unclear how many people were killed in that attack.

"Almost 90% (of the city) has been destroyed," Mariupol resident Maria Fiodorova, 77, said Monday as she crossed the border into Medyka, Poland. "There are no buildings there anymore." 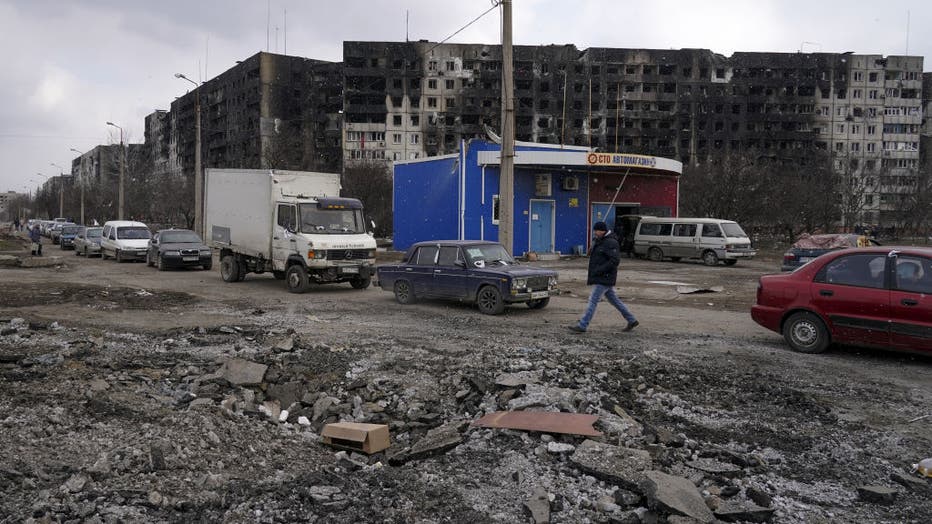 MARIUPOL, UKRAINE - MARCH 20: Civilians trapped in Mariupol city under Russian attacks, are evacuated in groups under the control of pro-Russian separatists, through other cities, in Mariupol, Ukraine on March 20, 2022. (Photo by Stringer/Anadolu Age

What is happening elsewhere in Ukraine?

In a video address, Zelenskyy hailed protesters in the occupied city of Kherson for courage in confronting Russian troops who used stun grenades and fired in the air to break up a demonstration.

Zelenskyy said that the war has turned ordinary Ukrainians into heroes and "the enemy doesn’t believe it’s all real."

Russian shelling on Sunday near the city center of the capital, Kyiv, killed eight people, according to emergency officials. The attack damaged a nearby high-rise building and devastated a shopping center, which Russian Defense Ministry spokesman Maj. Gen. Igor Konashenkov said had been targeted because it was used to store rockets. The claim couldn't be independently verified.

Russian troops are trying to surround the Ukrainian capital, which had nearly 3 million people before the war.

Ukraine’s prosecutor general said a Russian shell struck a chemical plant outside the city of Sumy a little after 3 a.m. Monday, causing a leak in a 50-ton tank of ammonia that took hours to contain. Konashenkov claimed the leak was a "planned provocation" by Ukrainian forces to falsely accuse Russia of a chemical attack.

Ukraine’s nuclear regulatory agency said Monday the radiation monitors around the Chernobyl nuclear power plant — site of the world’s worst meltdown in 1986 — have stopped working. It also said there are no longer firefighters available in the region to protect forests tainted by decades of radioactivity.

From the early morning, Kharkiv is under heavy shelling as thousands were forced to flee the city. Maria Avdeeva has documented the destruction in her city and explains the continued lies from President Putin to the Russian people.

AP video journalist Mstyslav Chernov has recounted his harrowing experience, along with AP photographer Evgeniy Maloletka, of being the only international journalists in besieged Mariupol before fleeing last week.

"We were the last journalists in Mariupol. Now there are none," he said.

The Russian siege of Mariupol has caused shortages of food, water and energy supplies. Video captured by AP shows residents pushing carts and carrying bags of food and supplies along debris-ridden streets and passages.

AP journalists on the scene of Russian shelling in Kyiv witnessed the flattened ruin of the shopping center, which was still smoldering Monday morning. The force of the explosion shattered every window in the high-rise next door and twisted its metal frames. In the distance, the sound of artillery rang out as firefighters picked their way through the destruction in the densely populated Podil district.

Are Russian forces making any advances?

Russians have increased the number of military aircraft sorties over Ukraine over the past two days, according to a senior U.S. defense official speaking on condition of anonymity to discuss the military’s assessment. That reportedly includes as many as 300 in the last 24 hours, most of which involve air-to-ground strikes. As of Monday, Russia had launched more than 1,100 missiles into Ukraine, the official said.

The official said Monday that Ukraine — which is using short and long-range air defense systems and drones to target Russian aircraft — has also increased the pace of its military flights, but declined to provide numbers.

Denied an early victory, Russia’s military is reverting to the scorched earth tactics of its past offensives in Syria and Chechnya, and pounding cities with airstrikes and artillery barrages.

What about diplomatic efforts surrounding the conflict?

Russian and Ukrainian officials have held a series of talks, but no substantive solution to the conflict has emerged from that dialogue.

Speaking to Israeli legislators via video link on Sunday, Zelenskyy thanked Israel for its efforts to broker talks with Russia. Zelenskyy has said he would be prepared to meet Putin in person, but Kremlin spokesman Dmitry Peskov said Monday that more progress must be made first.

Biden travels to Europe this week, where he will attend a summit with NATO leaders that will look for ways to strengthen the bloc’s own deterrence and defense to deal with the now openly confrontational Putin. Citing "unacceptable statements" by Biden about Putin — an apparent reference to the American calling the Russian a "war criminal" — the Russian Foreign Ministry has warned that relations with the U.S. are "on the verge of a breach" and summoned the U.S. ambassador.

According to the White House, Biden and the leaders of France, Germany, Italy and the UK discussed the war Monday, including concerns about Russia’s tactics in Ukraine, attacks on civilians, and underscored continued humanitarian and security support for Ukraine.

Biden and NATO have said repeatedly that while they will provide weapons and other defensive support to non-NATO member Ukraine, they are determined to avoid any escalation that risks a broader war with Russia.

Biden has added a stop to Poland during his trip, visiting a crucial ally of Ukraine which has taken in more than 2 million Ukrainian refugees.

How many civilians have died in Ukraine?

Comprehensive casualty figures are difficult to confirm. From the start of the war through Sunday, the U.N. human rights office recorded 925 civilians killed and 1,496 injured. Ukrainian officials say thousands of civilians have been killed. Estimates of Russian deaths vary, but even conservative figures are in the low thousands.