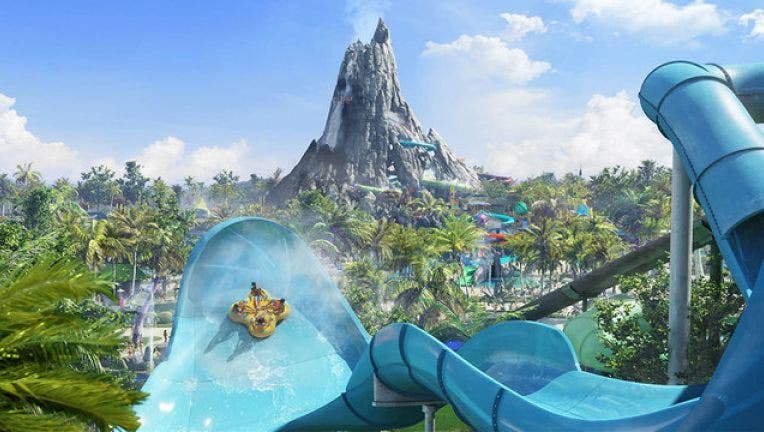 ORLANDO, Fla. - A new report states that a ride at Universal Orlando's Volcano Bay that left a man paralyzed has injured at least 115 other visitors.

According to the Orlando Sentinel, court records from a lawsuit claimed that at least 115 visitors were injured on the same water slide that paralyzed a tourist from New York last year at Universal Orlando's Volcano Bay.

They said the records showed that guests suffered a variety of injuries from Punga Racers, including scrapes, nosebleeds, concussions, and whiplash. Even two ride safety testers were apparently injured as well.

On the ride, people reportedly go head-first on mats down four flames into catch pools.

Under Florida law, it is said that large theme parks only have to report state ride injuries when visitors are hospitalized for at least 24 hours. Since 2017, the state has only had one report of a person hurt that seriously on Punga -- James Bowen, the same tourist from New York suing. The lawsuit claims that Bowen’s neck snapped back when he went through a wave at the end of the ride. It paralyzed him, the Orlando Sentinel said. The suit seeks more than $15,000.

"More than 1.5 million guests have experienced this ride, with Mr. Bowen’s injury being the single, reportable one," a Universal spokesperson told the Orlando Sentinel. "That said, we take every injury seriously and have a safety-first culture that places the safety of our guests and team members above everything else. When there is an injury of any kind, we immediately begin an investigation and review."

He added that "our process is rigorous and detailed and there are often many opinions as we arrive at a conclusion or work to resolve an issue" and that "we are confident in our process and in the safety of our rides.‘'