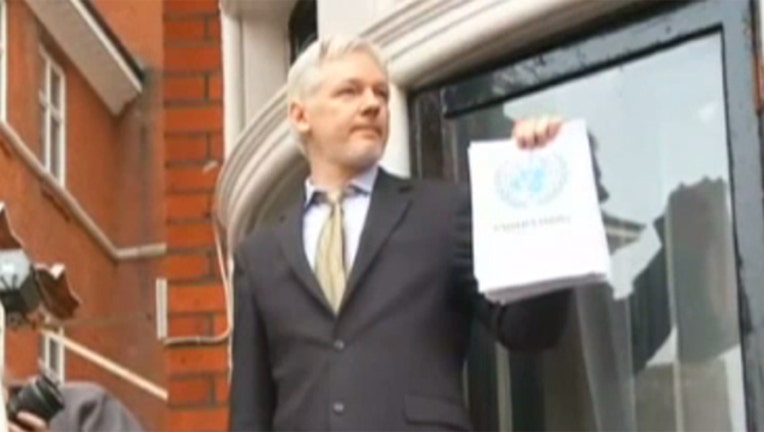 Julian Assange on a balcony at the Embassy of Ecuador in London. (File)

The Swedish Prosecution Authority said in a statement Friday that Marianne Ny "has decided to discontinue the investigation."

Assange took refuge in Ecuador's embassy in London in 2012 to escape extradition to Sweden to answer questions about sex-crime allegations from two women. He has been there ever since, fearing that if he is arrested he might ultimately be extradited to the United States. Last month, President Donald Trump said he would support any decision by the Justice Department to charge Assange.

WikiLeaks tweeted after the Swedish announcement: "UK refuses to confirm or deny whether it has already received a US extradition warrant for Julian Assange. Focus now moves to UK."

Friday's announcement means Assange is no longer under any investigation in Sweden. British police said before the announcement that Assange is still wanted in Britain for jumping bail. It is not clear if that may change now that the investigation has been dropped. Friday was the deadline for the Swedish prosecution to send a request to Stockholm District Court in the Assange case.

The 45-year-old Australian computer hacker was wanted in Sweden for questioning over a rape allegation stemming from a 2010 visit.

"This is a total victory for Julian Assange. He is now free to leave the embassy when he wants. We have won the Assange case. He is of course happy and relieved. He has been critical that it has lasted that long," Per E Samuelsson, his lawyer in Sweden, told Swedish Radio. Samuelsson was not immediately available for comment.

Copyright 2017 The Associated Press. All rights reserved. This material may not be published, broadcast, rewritten or redistributed.