TAMPA, Fla. - Tampa's curfew seemed to have the desired effect Sunday night, with no sign of the violent protests and looting that took place the night before.

A group of several dozen protesters tried to defy the 7:30 p.m. curfew issued by the city of Tampa, but police held a line downtown, occasionally firing gas or advancing closer to the demonstrators, and eventually dispersing them entirely.

The curfew was ordered in response to Saturday night’s violence in the north Tampa area and applies to all businesses and people within the city of Tampa, from 7:30 p.m. through 6 a.m. until further notice.

“What I saw last night was not a call for voices to be heard, ideas to affect change or ways to shine a light on inequality,” said Mayor Jane Castor. “What I saw was shameful, what I saw was heartbreaking. And what I saw did not reflect our community and the values we share. We stand in solidarity with all of the peaceful protests happening in our city and around the country.” 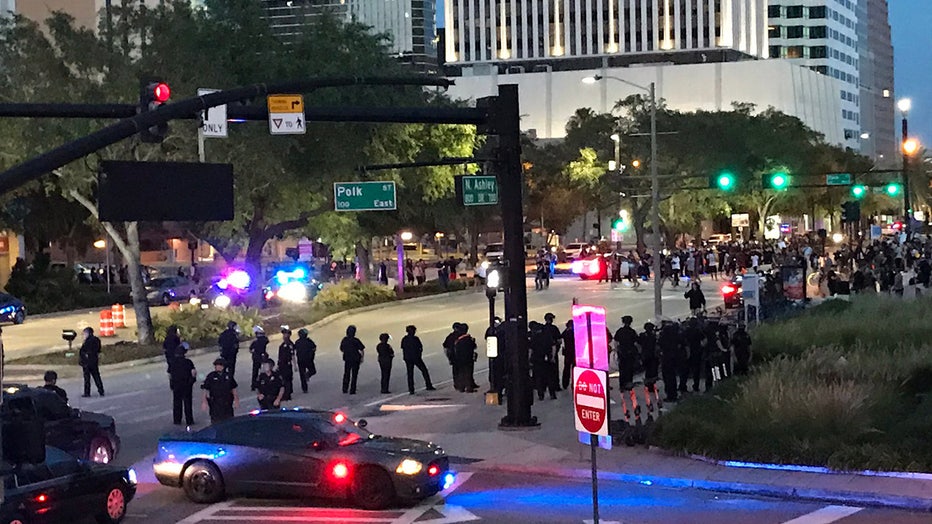 Unlike last night, today's demonstrations in protest of George Floyd's death were taking place in the downtown area, and were largely peaceful.

Not long after 7:30, police began issuing warnings to protesters who remained downtown near Ashley and Polk. Those who refused to leave were chased, by police, while some were pepper-sprayed and even arrested.

Around 9:15 p.m., police ordered the protesters to leave the area and gave them three minutes to do so. A FOX 13 crew on the scene reported that they demonstrators appeared to comply. They did not appear to return.

Violating the city curfew order is a second-degree misdemeanor, which carries a penalty of up to 60 days imprisonment and/or a $500 fine.

Mayor Castor noted that people are allowed to go out to the grocery store or pharmacy for essential items. However, stores with in city limits will be closed from 7:30 p.m. until 6 a.m.