Lakeland's royal swans were gift from the Queen

LAKELAND, Fla. - Lakeland has remained connected to Queen Elizabeth II for decades, and it will remain that way for years to come following her passing.

Back in 1957, she gifted a pair of royal swans to the city. Those swans flourished and are now an iconic part of the city's culture.

More than 80 of them now live at Lake Morton. 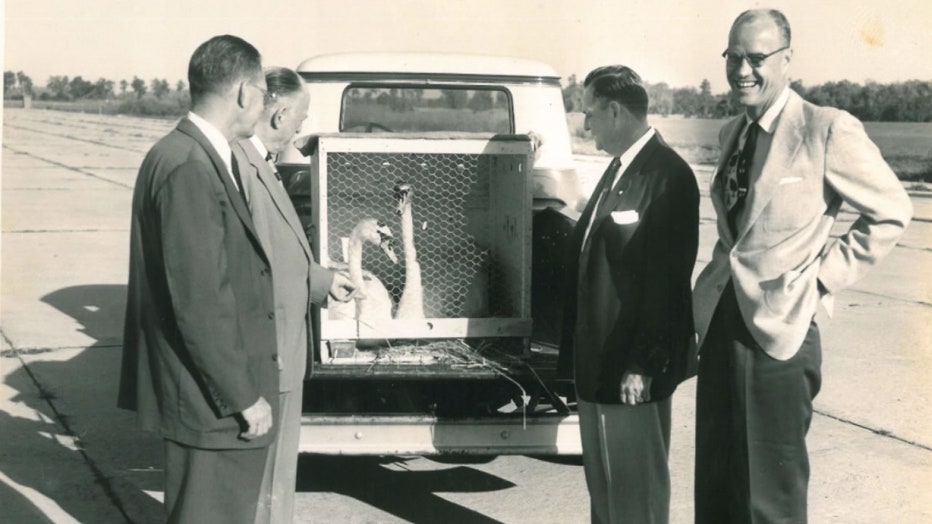 The story of Lakeland’s swans starts in 1926, when the city’s swan population sat at about 20. The city even established a Swan Department to oversee the birds.

However, by 1954, the last swan passed away after others became victims to alligators, dogs, diseases, chemicals, and human interaction, according to city officials. The community came together to raise funds to purchase new swans, but that didn't work –until the Queen stepped in.

When the Queen’s swans arrived in ‘57, they became instant celebrities, and still are today.

Among her worldly travels, Queen Elizabeth made a visit to Tampa more than 30 years ago. As many in the Tampa Bay area slept, the queen's yacht headed for Harbor Island in 1991.

"It is just the rite of passage for you to bring your children or grandchildren down here to feed the swans or watch the swans," commented Lakeland Mayor Bill Mutz, as he stood next to a costumed 15-foot-high swan, which towered over the chilled crowd.

Earlier this year, the city celebrated its Sapphire Jubilee. The year marked 65 years when the original pair of swans arrived in Lakeland from England.

On Thursday, the longest-reigning monarch in British history died after 70 years on the throne. Queen Elizabeth II was 96. Buckingham Palace announced the queen’s death in a statement, writing that Elizabeth "died peacefully" on Thursday afternoon at Balmoral Castle, which had been her summer residence in Scotland.

Her 73-year-old son Prince Charles automatically becomes king, though the coronation might not take place for months. Royal officials said Britain's new monarch will be known as King Charles III.