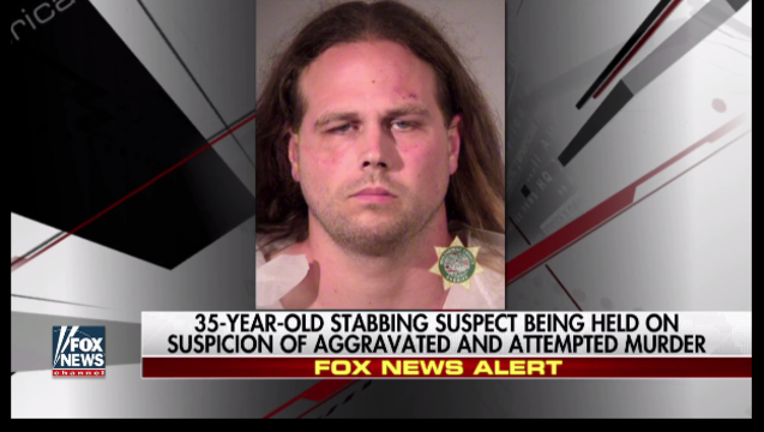 PORTLAND, Ore. (AP) -- Unease about white supremacist activity in Portland deepened after the fatal stabbings of two men who tried to shield young women from an anti-Muslim tirade, and some people worry that the famously tolerant community could see a resurgence of the hostilities that once earned it the nickname "Skinhead City."

The attack aboard a light-rail train happened Friday, the first day of Ramadan, the holiest time of the year for Muslims. Authorities say Jeremy Joseph Christian started verbally abusing two young women, including one wearing a hijab. When three men on the train intervened, police say, Christian attacked them, killing two and wounding one.

Christian, 35, was defiant during his brief initial court appearance Tuesday, shouting: "You call it terrorism I call it patriotism!"

He made repeated outbursts saying "you've got no safe place!" and "death to the enemies of America!"

Christian, who faces aggravated murder and other charges, didn't enter a plea.  He has been appointed public defenders. In a statement, Lane Borg, the head of the local public defender agency, said the office was "saddened by this tragedy" but urged people to let the justice system take its course.

In court documents, prosecutors say Christian confessed while in the back seat of a patrol car after his arrest.  His court-appointed attorney, Gregory Scholl, did not immediately return a call for comment.

The deaths stunned the city, but also underscored nervousness about recent events, including a series of apparent hate crimes in the region and contentious public rallies that have drawn national attention.

The Pacific Northwest has a long and violent history of white supremacist and other racist activities, despite its more recent reputation for being one of the nation's most socially liberal regions.

"The idea that Portland is so liberal supersedes this dark, hidden secret about racism," said Karen Gibson, a professor of urban studies at Portland State University.

The lone man to survive Friday's stabbings says he's having a difficult time processing what happened. Micah Fletcher told KGW-TV (https://goo.gl/HJjwpI) that he's focusing on trying to get better.

"I'm healing," Fletcher told the station. He was released from the hospital Monday.

Many of the early settlers to Oregon were from Southern states and brought with them negative attitudes about blacks, Gibson said. Only about 6 percent of the Portland population is black, while more than 70 percent is non-Hispanic white, statistics show.

Some residents said President Donald Trump has caused those racist demons to stir again with his administration's travel ban, his promise to build a wall along the border with Mexico and his crackdown on illegal immigration.

"I don't have that feeling like it can't happen here -- the way people talk about Portland -- because we've got racism. We've got all kinds of things," said Murr Brewster, who came to see a memorial at the city's transit center.

"It's everywhere and the trouble is, it's getting more and more prevalent."

On Tuesday, Wheeler reiterated his call to organizers of a June 4 protest to cancel, saying he fears they could further enflame tensions. The event organized by the group Patriot Prayer is billed on its Facebook page as a Trump Free Speech Rally in "one of the most liberal areas of the West Coast." Several counter-protests are planned.

Christian attended a similar rally in late April wearing an American flag around his neck and carrying a baseball bat. Police confiscated the bat, and he was then caught on camera clashing with counter-protesters.

Wheeler has also asked the federal government to cancel a June 10 rally that targets Sharia law out of fears it could create unrest.

"These kinds of rallies ... are typically people who come from elsewhere and hold rallies here because we are a deep blue city. They are intending to be provocative," Wheeler said Tuesday in a phone interview with The AP. "I'm going to do my best to keep the peace here."

In a video posted on Facebook, Joey Gibson of the group Patriot Prayer, condemned Christian and acknowledged that some rallies have attracted "legitimate Nazis." He described Christian as "all crazy" and "not a good guy" during the April 29 event. He hurled insults at rally organizers as well as counter-protesters and was not a Trump supporter, Gibson said.

"To say that any of my speakers are racist, that's ridiculous," Gibson said in his video.

No one immediately replied to a message sent to Patriot Prayer through Facebook.

The tumult caps a series of unsettling events in recent months in and around Portland.

Earlier this year, organizers of a small community parade affiliated with the city's famous Rose Festival canceled the celebration over fears of violence after protesters said the local Republican Party had plans to allow a "neo-Nazi hate group" to march with them. Local GOP leaders denied the charges.

In the suburb of Troutdale, an Iranian refugee found his home painted with racist graffiti and death threats. And in Gresham, another eastern suburb, prosecutors charged a man with a hate crime after police said he chased down a black teenager with his car after a fight and struck him, killing him.

For years, Portland was the home base for Volksfront, a now-defunct white separatist organization founded in 1994, according to the Southern Poverty Law Center, which tracks hate groups.

"There have been skinheads in that region forever," said Heidi Beirich, spokeswoman for the law center.

One of the most infamous attacks in Portland's racial history occurred in November 1988, when an Ethiopian immigrant was beaten to death by three white supremacists in front of his apartment.

Mulugeta Seraw was a student who came to the United States to attend college. The members of the California-based White Aryan Resistance killed him with a baseball bat.

The Southern Poverty Law Center and the Anti-Defamation League won a multimillion-dollar civil case in 1990 against the White Aryan Resistance on behalf of his family, and the damages crippled the organization.