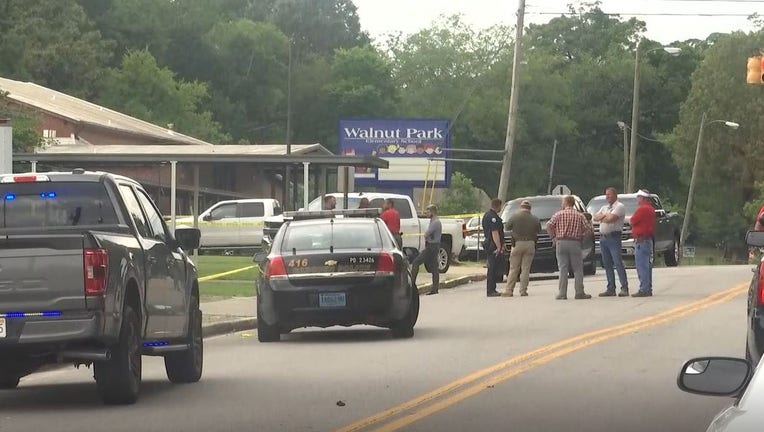 Officials gather outside Walnut Park Elementary School in Gadsden, Ala., after a fatal police shooting on Thursday, June 9, 2022. Authorities say a man who tried to enter an Alabama elementary school where a summer program was being held was shot to

GADSDEN, Ala. - A man fatally shot by police outside an Alabama school that officials said he attempted to enter had "serious mental issues" and attended the school as a child, according to his brother.

Justin White told WIAT-TV that Robert Tyler White, 32, seemed a little "off" the last time he saw him last week, but that wasn't unusual.

"He always seems off," White said.

Officials said a "potential intruder" — later identified as White — went to several doors trying to get into Walnut Park Elementary School on Thursday while a summer literacy program was being conducted for nearly three dozen children. All the exterior doors were locked and the man was killed after attempting to grab an officer's gun outside the building, state police said.

Justin White said his older brother suffered from "serious mental issues" and might have tried to have police kill him.

White said his brother, who he called "Bobby," had been a garbage collector in North Carolina for eight years before coming back to Gadsden. The brother attended Walnut Park as a child and didn't ever get the mental health help he needed, White said.

"But I thought he was doing good," White said.

Justin White said he was surprised his brother was involved in the incident, but added that the man also was a "hot head."

Authorities have not said whether Bobby White, who previously lived in Bunnlevel, North Carolina, was armed or why he might have been trying to get into the school or a police patrol car that state police said he tried to enter before he was killed.