WINTER HAVEN, Fla. - A Polk County firefighter convinced a young girl to send him nude videos, and after two years, she was fed up with his persistent messages and quickly discovered he was a first responder, detectives said.

"Instead of fighting a hot fire, you got a hot mess on your hands because you are in the county jail now," Sheriff Grady Judd said during a Friday press conference.

Officials arrested 24-year-old Richard Dalton Battle for lewd and lascivious conduct and soliciting a person under the age of 16. Detectives said Battle found the victim – who was 14 at the time – on Instagram and added her on Snapchat in 2019. They said she communicated her age and Battle responded with, "Okay."

When she asked his age, he didn't respond, detectives said, but the conversation eventually turned sexual in nature. They said Battle told her that Snapchat listed her address and that he knew where she lived. He then threatened to tell her mother that she was using Snapchat unless the teen sent him nude photos and videos.

"'I'm going to come tell your mama what you've been doing if you don't send me some nude videos,'" Judd said, referring to what Battle told the teenager. "That's right, he extorted her."

Out of fear that he would come to her home, the teen sent him the videos, detectives said.

"She didn’t say anything at the time," Sheriff Judd said. "She was young. She was timid. She was scared." 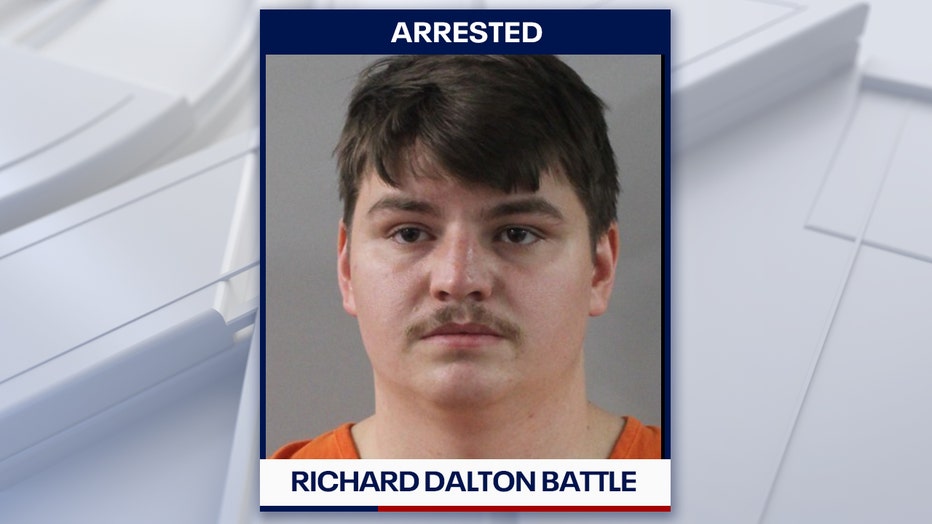 Battle continued to send her Snapchat messages, requesting more videos, but the victim ignored them. She continued to ignore the messages until March of this year when she said she "couldn't take it anymore," according to the sheriff's office.

"So, she started searching him up," the sheriff said. "He used his real name, made it easy. She saw he was a firefighter…Well, folks, we’re all held to a higher standard. That enraged the victim."

Because Battle used his first and last name as his Snapchat username, detectives said the victim easily found his Facebook page, where he was seen wearing a Polk County Fire Rescue shirt. She reported the Snapchat conversations to an adult, who contacted the sheriff's office.

When Battle was interviewed by detectives, he told them he thought she was 18. However, Judd said they are aware the teen communicated her age in 2019.

"He wouldn't leave her alone and she said, ‘Enough,’" the sheriff said. "She grew up."

The sheriff's office released excerpts from those messages:

Battle: Where's the spicy video you used to send ???
Victim: Wtf
Battle: Hey you’re hot what can I say
Battle: Liked seeing you shake that a**
Victim: No
Battle: Haha damn had to try you used to send them now you don't such a shame
Victim: You're a shame for thinking I'll send them again
Victim: Like seriously wtf is wrong with you
Battle: Was trying to see some a** but okay
Victim: leave a b**** alone
Victim: especially after she says no

Judd said the incident is just the latest example of why parents need to closely monitor their kids' online activities.

"This is a clear-cut case of why parents need to be all up in their children’s business when they are online and using mobile apps," the sheriff said. "Please put parental controls on your children’s tablets and cell phones – parents and guardians are the first line of defense when it comes to keeping children safe."

Battle faces three felony charges, including solicitation of a person under 16 to commit a lewd act, unlawful use of a two-way communication device, and extortion. He is being held without bond.