With temperatures heating up, many people are headed to local water parks. Some people at Volcano Bay were surprised by the crowd level and lack of social distancing during one visit.

ORLANDO, Fla. - Photos of people packed together at Volcano Bay are sparking concern about a lack of social distancing.

Theme park writer Josh Young says as he was leaving the water park Friday, he and other guests were left in an uncomfortable situation.

“It was not a pleasant experience at all,” Young, who writes for Theme Park University, said.

His photos show people packed together as they’re waiting to exit the park.

He said guests were trying to get on buses to head back to the parking lot when foot traffic snarled. 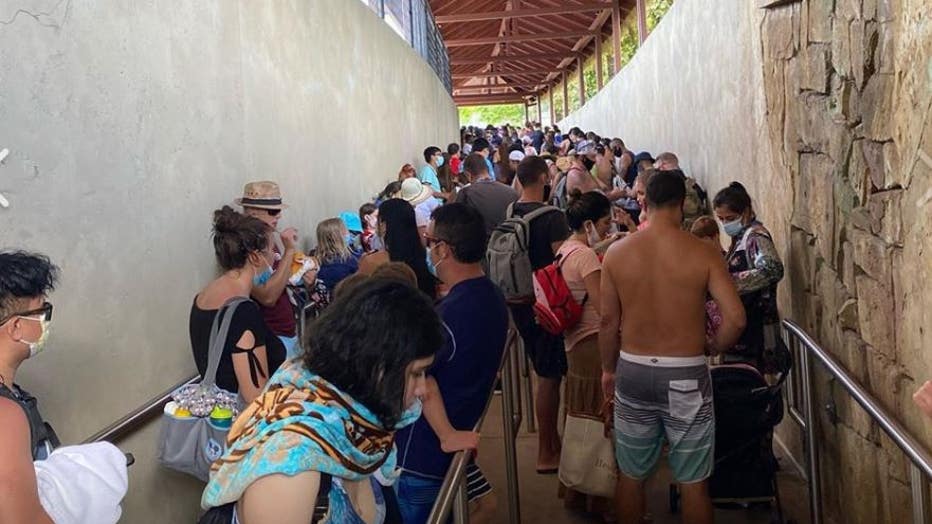 “The ramp, which you saw pictures of, leading up to the buses on the other level had no social distancing markers,” Young said. “There was a barrage of at least 40 employees that just passed by us constantly while we were waiting for buses. They apparently have their own separate bus. They were pushing pass because they didn’t want to wait, encroaching into our space even more.”

FOX 35 News called and emailed Universal Orlando on Saturday, but did not receive a response.

When State Representative Anna Eskamani inquired on Twitter, Universal said:  “We were quickly made aware of this concern yesterday and our team at volcano bay was able to resolve the situation swiftly. We have also put processes in place to ensure this does not occur again.”

“This is a problem, in particular, that is absolutely fixable,” Young said.

He believes the park needs more planning when it comes to closing time.

“Overall, I felt that they were doing a pretty good job at spacing out chairs and having all of their lifeguards wear masks," Young said.

But his pictures showing the crowds have people asking the question, "Are things opening up too fast?"

“Who knows what’s going to happen in a month or two,” Young said. “And I feel like that is the big question that we don’t know.”

Young said he’s also spent time at Universal Studios and Islands of Adventure and had very positive experiences inside those parks.