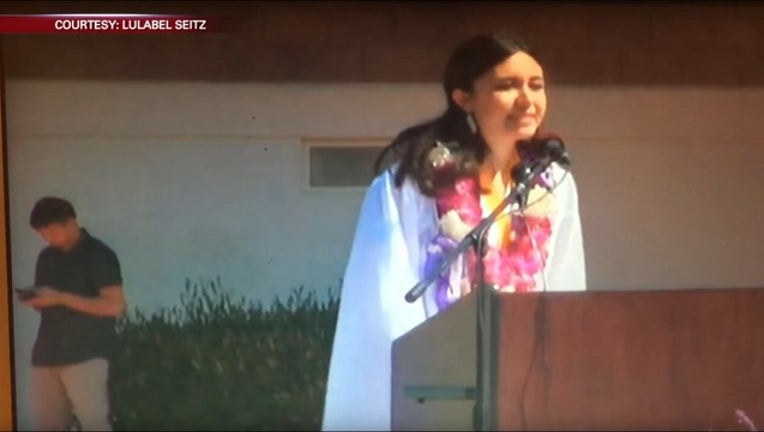 OAKLAND, Calif (KTVU) - Petaluma High School is standing by its decision to cutoff the microphone of a valedictorian during her commencement speech last weekend.

Lulabel Seitz talked about how the school recovered from last October’s wildfires and added that “we didn’t let that drag us down.” But when she went off her scripted speech four minutes into her address, officials cut the microphone off.

“The class of 2018 has demonstrated time and time again, that we may be new in generation, but we are not too young to speak up, to dream and create change. Which is why, even when some people on this campus, those same people….”

And then Seitz’s microphone off was cutoff before she could finish her statement. Chants of “let her speak” could be heard from fellow graduates following the silence.

Afterwards, 17-year-old Seitz, who has been admitted to Stanford, posted a video on YouTube that she said was the uncensored version of her speech. She spoke of sexual assault allegations at the school without naming anyone in particular.

"And even learning on a campus, in which some people defend perpetrators of sexual assault and silence their victims, we didn't let that drag us down," Seitz said in the video.

Petaluma high principal told the San Francisco Chronicle that the school was trying to make sure the graduation ceremony was appropriate and beautiful.