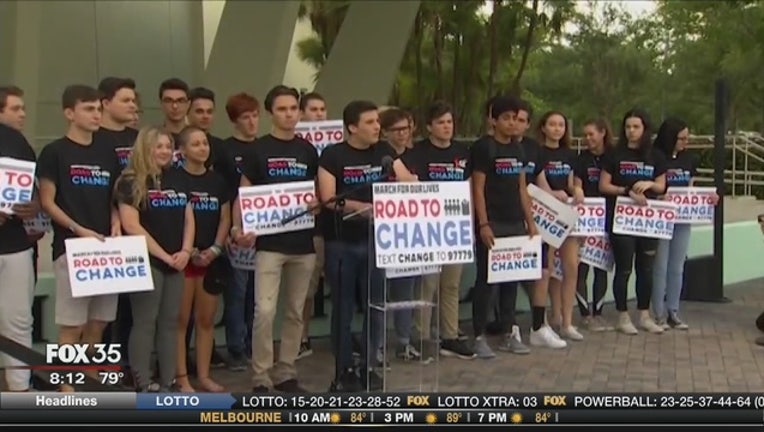 CHICAGO (AP) - Chicago anti-violence activists and a group of Florida high school shooting survivors fanned out across the city's South Side on Saturday, knocking on doors and registering people to vote in a bid to build support for changing the nation's gun laws.

Ryan Deitsch, 18, from Marjory Stoneman Douglas High School in Parkland, where 17 people died on Feb. 14, said the tragedy has afforded the survivors a national spotlight they are now using to try and build a groundswell of support.

Their goal is to reach "anybody who lives here and is tired of the status quo."

"We need to be able to live out the American dream and if were just being gunned down at 21 or younger we can't," he said. "It's killing the future of this country."

Chicago is the first location on more than 25-stop tour Parkland students are taking this summer, targeting communities rocked by gun violence, or where lawmakers supported by the National Rifle Association are seeking office.

They plan on holding rallies, town halls and registering people to vote. Later Saturday, the group was holding a town hall in Naperville, an upscale suburb where Republican congressman Peter Roskam has been a consistent supporter of gun rights and has received donations from the NRA.

"They should be speaking to their own people to realize what the problems are," Deitsch said. "Politicians become so detached from the situation that the people they represent aren't represented."

In addition to knocking on doors and talking to people on the South Side, which activists believe is unfairly portrayed in news stories about Chicago violence, the group is hosting a cookout in an area park where they will also be signing people up to vote.

On Friday, a joint rally was held at an area church. The event featured Former Rep. Gabby Giffords, who was gravely wounded in a 2011 shooting. She told the crowd to vote on Election Day to effect the change they want. Entertainers Jennifer Hudson, Chance the Rapper and will.i.am also appeared.

"We need to vote people in who will speak for us, or take them out if they are not," said activist Ke'Shon Newman, 16, of Chicago.

Deitsch said strengthening state gun laws is good, but ultimately a federal effort will be required to tamp down gun violence.