Over 120,000 passengers expected to fly from Orlando this weekend

The Orlando International Airport is expecting tens of thousands of holiday travelers this weekend, even as a new strain of COVID-19 has surfaced in Florida.

ORLANDO, Fla. - The Orlando International Airport is expecting tens of thousands of holiday travelers this weekend, even as a new strain of COVID-19 has surfaced in Florida.

The Florida Department of Health announced on Thursday that it has evidence of the first identified case of the United Kingdom COVID-19 variant in Martin County. They described the individual as a man in his 20s with no history of travel. It was first detected in the United Kingdom in September and is said to be more "rapidly transmissible" than the other strains.

Despite this, the Orlando International Airport said that they expect over 120,000 departing passengers between Saturday and Monday. The TSA reported more than one million people went through their checkpoints each day between December 26th and 30th. 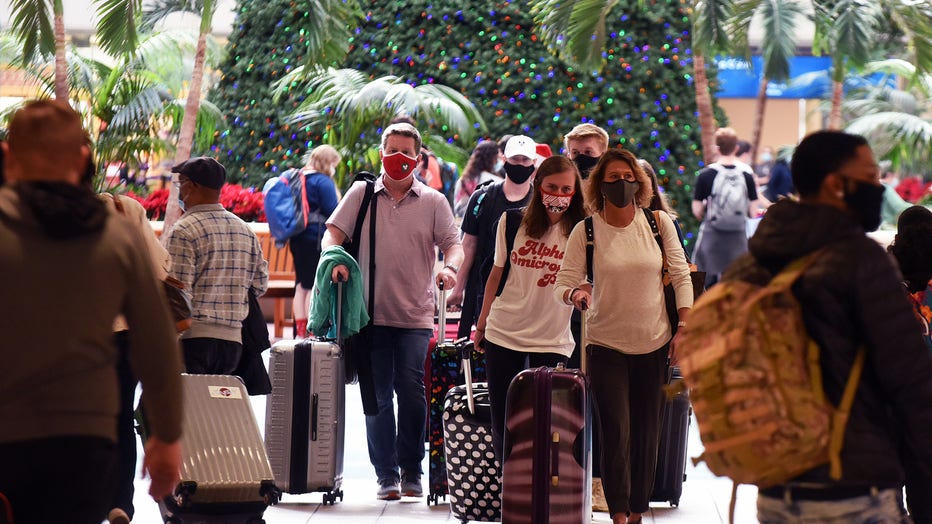 Travelers wearing face masks arrive at Orlando International Airport on the day before Christmas, ignoring health experts who recommend against holiday travel as the coronavirus pandemic hits record levels across the United States, on December 24, 20

The Centers for Disease Control and Prevention (CDC) previously warned Americans that travel is risky during the holidays and to stay home. Now, the new strain of COVID-19 from the United Kingdom has been detected in three states so far: Florida, Colorado, and California.

Dr. Stuart Ray, a professor of medicine at John Hopkins, said that the new strain means people need to double down on safety precautions, especially as it is "60 to 70 percent more infectious."

Orlando International Airport is reminding people to wear a mask and social distance when they arrive. They also said to get to the airport two hours before their flight.