Florida Governor Ron DeSantis gives an update on the wildfires in the Panhandle as crews from the Bay Area head up north to assist.

PANAMA CITY, Fla. - Huge wildfires in the Florida Panhandle forced veterans in a nursing home to evacuate Sunday alongside residents of more than 1,000 homes in an area still recovering from a Category 5 hurricane three years ago.

Firefighters battled the 9,000-acre Bertha Swamp Road fire and the 841-acre (340-hectare) Adkins Avenue fire, which have threatened homes and forced residents of at least 1,100 houses in Bay County, Florida to flee over the weekend. The Adkins Avenue fire destroyed two structures and damaged another 12 homes late Friday.

On Sunday, a third fire developed, forcing the evacuation of a 120-bed, state-operated nursing home in Panama City. Public transit was being used to move the residents at the Clifford Chester Sims State Veterans’ Nursing Home. Buses also were on standby in case the 1,300 inmates at the nearby Bay County Jail needed to be evacuated to other facilities.

Hurricane Michael in 2018 left behind 72 million tons of destroyed trees that have provided fuel for the Bay County wildfires, according to the Florida Forest Service. The hurricane was directly responsible for 16 deaths and about $25 billion in damage in the U.S.

Local authorities say they don’t know when residents will be able to return to their homes. The county opened a shelter at the Bay County Fairgrounds for displaced residents.

"I know there has been frustration with people not being able to get back into their homes," said Bay County Sheriff Tommy Ford. "But we have had things that have popped up on a minute’s notice and really caused problems. As soon as we can, we will let people go back." 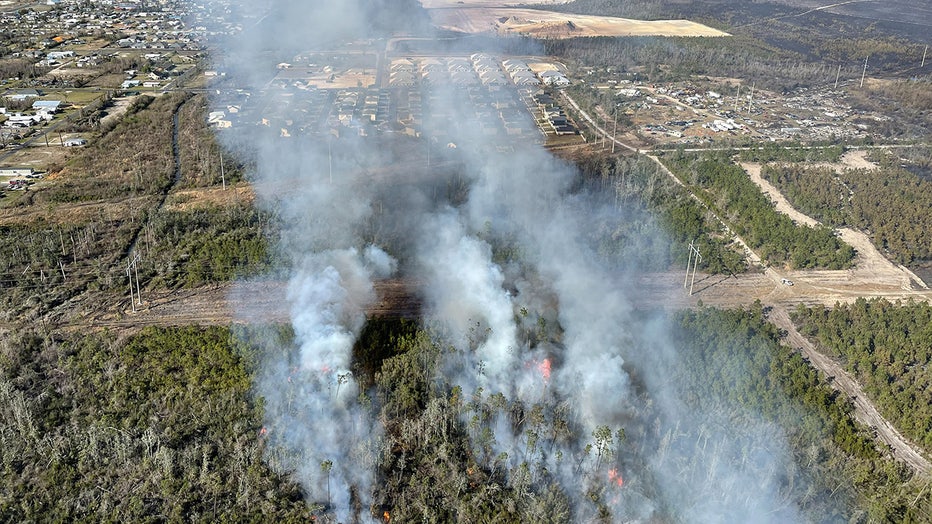 The Adkins Avenue fire has been burning in Bay County since Friday, forcing the evacuation of at least 600 homes, and it was 35% contained Sunday. Fire officials initially said it was 1,400 acres (567 hectares) but adjusted the size downward Sunday afternoon.

The much-larger Bertha Swamp Fire started in neighboring Gulf County on Friday but spread to Bay and Calhoun counties Saturday, forcing the evacuation of scores of more homes. It was 10% contained as of Sunday.

"It’s just hard to believe that something could be that big," said Brad Monroe, chief of Bay County Emergency Services. "If you fly around it, it’s just incredible. It’s hard to comprehend how big, strong and fierce this fire is." 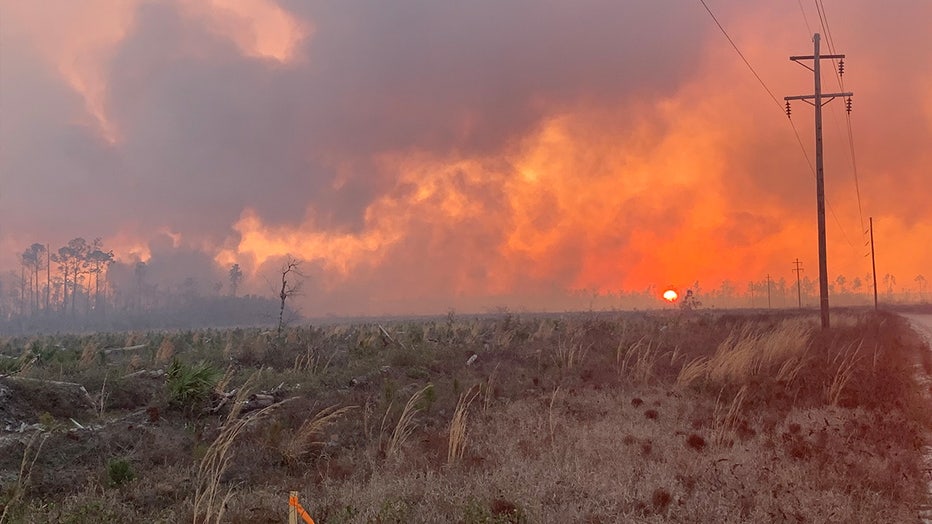 Florida Forest Service helicopters had dropped more than 103,000 gallons (about 468,000 liters) of water on the Adkins Avenue fire since Friday, and 25 bulldozers had been deployed to plow fire lines. Firefighters from all over Florida were deployed to the county to battle the blazes.

"Unfortunately what we have going on today is almost a carbon copy of yesterday’s weather," Joe Zwierzchowski, a spokesman for the Florida Forest Service, said Sunday morning. "We are looking at high, sustained winds of 10 to 15 (16 to 24 kilometers) miles per hour, gusting up to 20 to 25 miles (32 to 40 kilometers) per hour. So that’s going to make it a very dynamic situation."

Currently, there are nearly 150 wildfires burning more than 12,100 acres (about 4,900 hectares) throughout Florida, and the state is only at the very beginning of its wildfire season.

"It is incredibly dry throughout the state and typically we see this kind of activity in the months of April and May," Zwierzchowski said. "Seeing it in early March really gives us an indication of what the fire season is going to be like."