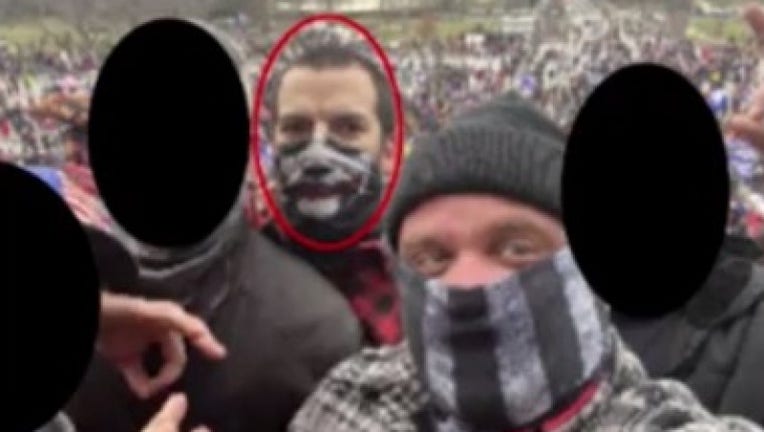 ORANGE COUNTY, Fla. - An Orange County Sheriff's deputy whose husband is accused of participating in the Capitol riot has been cleared of any wrongdoing, a Sheriff's Office inquiry into her revealed.

Federal officials have accused Arthur Jackman of being inside the U.S. Capitol during the January 6 riot. Photos show him in the building with several members of the Proud Boys.

While the Sheriff's Office previously said that Deputy Sarah Jackman "has not been accused of any wrongdoing and our records show she was at work on Jan. 6, 2021," an inquiry was still performed. In addition, the FBI reportedly previously confirmed that there is no evidence or indication that she had anything to do with the events at the Capitol or is a member of any extremist organization.

Investigation from the Orange County Sheriff's Office involved interviewing multiple witnesses, inquiries to the FBI, a review of Deputy Sarah Jackman's time record report, a digital forensics examination of his cell phone, and a review of the FBI arrest warrant of Arthur Jackman.

They said that Deputy Sarah Jackman has been cleared of any wrongdoing related to the Capitol riot.

"This inquiry failed to uncover any articulable facts establishing any wrongdoing on behalf of Deputy Jackman. It appears the acts Mr. Jackman participated in were of his own accord and without any knowledge, either before or after the events, by Deputy Jackman," the report from the investigation said. "Her lack of knowledge regarding Mr. Jackman's actions was confirmed by the FBI and our Intelligence Unit. Therefore, based on the information obtained during this inquiry, it was determined Deputy Sarah Jackman did not violate the Orange County Sheriff's Office Written Directives or Florida State Statutes."

It closed with, "therefore, the status of this inquiry is considered unfounded and hereby closed."

TRENDING: Child tax credit payments to go out this week: What to know

Since the Jan. 6 riot, more than 450 people have been arrested on charges related to the breach, including over 130 individuals charged with assaulting or impeding law enforcement.

Since the Jan. 6 riot, more than 450 people have been arrested on charges related to the breach, including over 130 individuals charged with assaulting or impeding law enforcement.