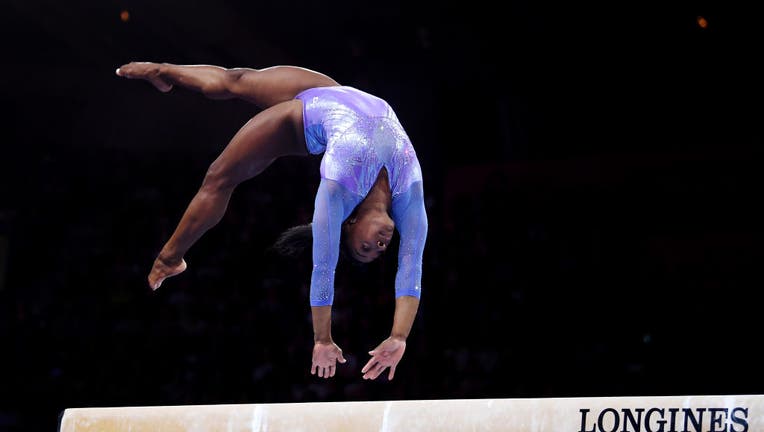 STUTTGART, GERMANY - OCTOBER 13: Simone Biles of USA competes on Balance Beam during the Apparatus Finals on Day 10 of the FIG Artistic Gymnastics World Championships at Hanns Martin Schleyer Hall on October 13, 2019 in Stuttgart, Germany. (Photo by

Simone Biles wants to bring gymnastics to the masses and plans to bring some of her friends along for the ride.

The Olympic and world champion is headlining a tour in the fall of 2020 that will be a mixture of sports and entertainment intended to inspire the next generation of female athletes. The “Gold Over America” tour will visit more than 35 cities, including Biles’ hometown of Houston as well as New York, Los Angeles and Chicago.

The idea originated when Biles was in the early stages of her return to gymnastics in the fall of 2017 after taking a year off following her memorable performance at the 2016 Olympics, where she won four gold medals and five in all, becoming the face of her sport.

“When we found out I was coming back, we kind of sat down and talked about things I would want to do,” Biles told The Associated Press on Wednesday. “They said it could be as small as starting a perfume line or maybe as big as a tour. I was like, ‘Actually, that would be pretty sweet. That would be the coolest thing ever.’”

The women-only roster will reunite Biles with longtime friend Katelyn Ohashi. Ohashi and Biles competed against each other growing up. Like Biles, Ohashi — the 2012 junior national champion — had designs on competing at the Olympics before injuries sidetracked her elite career. She instead attended UCLA, helping the Bruins win the national title in 2018 and becoming a viral sensation last winter with her Michael Jackson-themed floor routine.

“She made her mark,” Biles said. “She put college gymnastics and gymnastics ... back on the map. She has impacted a lot of female gymnasts and I think this really brings us full circle.”

The tour will also finally allow Biles to join forces with former UCLA coach Val Kondos Field. Biles verbally committed to compete for the Bruins before turning professional in 2015. Kondos Field, who retired last spring, will serve as executive producer and supervising choreographer for the tour.

Biles said the goal is to bring the sport closer to the audience and also to loosen things up a bit. The plan is to utilize giant video screens, pyrotechnics and an in-house DJ.

“We want this to be completely different,” Biles said. “There will be dancing. Hopefully trampoline. Something people have never seen before.”

Biles captured five gold medals at the 2019 world championships to boost her career total to 25 medals overall, a record for both men and women. She is widely considered the greatest gymnast of all time and her face has been at the forefront of television promos for the 2020 Olympics, where she will try to become the first woman in more than 50 years to repeat as gymnastics champion.

While there are times she admits she’s still processing her fame, she’s is starting to understand her influence on the sport. It’s one of the reasons she agreed to headline the tour.

“In a way, it’s scary,” Biles said. “But at this point I also feel like it’s really exciting to have a platform that I do and to be able to do some of the things that I’ve been blessed with. I think it’s a combination of both. So I don’t know. We went back and forth on if we wanted my name in it, but you never know. I think it’ll be OK.”

USA Gymnastics typically coordinates a post-Olympic tour of its own, though there are no plans for one in 2020. The organization remains in bankruptcy court as it tries to reach a resolution with athletes who were sexually abused by former national team doctor Larry Nassar, who abused gymnasts — Biles included — under the guise of treatment.

Biles said she hasn’t spoken to anyone at USA Gymnastics directly about her tour but added, “I know they’re aware about it and they’ve been pretty supportive.”

“Simone is an amazing athlete and person, and having her own tour will give her a stage to showcase her skills and talent, as well as those of other women,” USA Gymnastics said in a statement.

Just how many athletes will join Biles and Ohashi remains uncertain.

“We’re looking at the top of the line and the best gymnasts from elite and maybe we did think from around the world, but that gets really, really difficult just because of the visas and all of that stuff,” Biles said. “Right now in the circle I know a couple of college gymnasts and then elite gymnasts (who will be on the tour), like world class.”

Biles is in the midst of a recovery period following her record-breaking performance at the world championships. She said she anticipates returning to competition in April before the US Championships, the Olympic Trials and then the Olympics next summer. Then it’s likely off to retirement and a chance to make an impact far beyond the competition floor, a process that will start with the tour, where she will have her hand in selecting the group and helping put the show together.

“I feel like everyone’s creative vision coming together is very unique,” she said. “And so I think once we get together and we have a set plan on what we’ll do, it’ll be very exciting.”