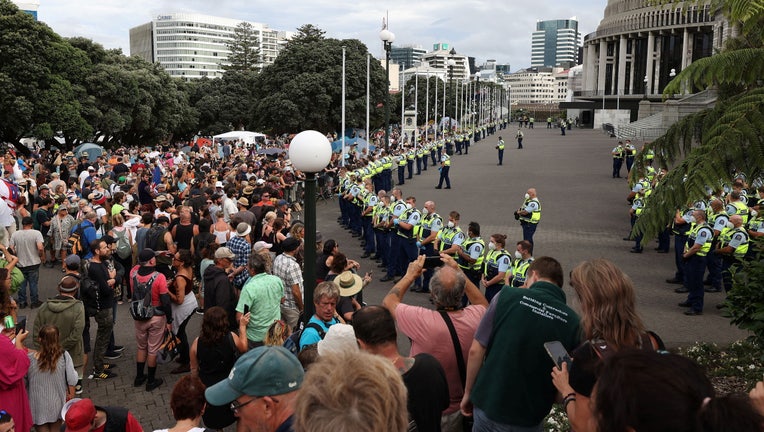 Police withdraw from their line and fall back to the front of Parliament buildings on the third day of demonstrations against Covid-19 restrictions, inspired by a similar demonstration in Canada, in Wellington on February 10, 2022 (Photo by MARTY MEL

WELLINGTON, New Zealand - New Zealand's prime minister on Monday said protesters who oppose coronavirus mandates were using "intimidation and harassment," as authorities appeared to take a harsher stance toward the convoy of demonstrators that has disrupted the capital of Wellington for nearly a week.

Police initially let the protesters set up tents and camp on the grounds of New Zealand's Parliament before arresting 122 people on Thursday and then backing off again. The size of the protest dropped to a few hundred last week but increased again to around 3,000 over the weekend.

"I very clearly have a view on the protesters and the way that they’ve conducted their protest because it has moved beyond sharing a view to intimidation and harassment of the people around central Wellington," she said. "That cannot be tolerated." 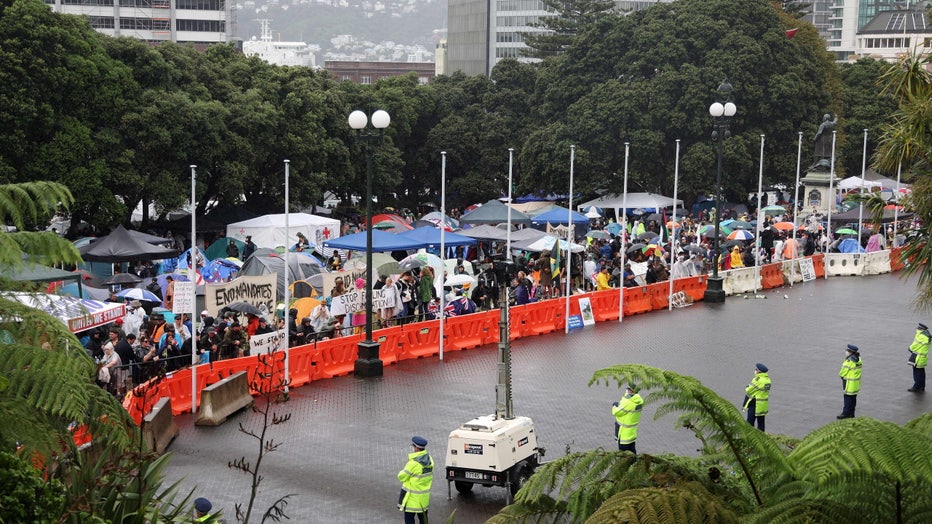 Protesters (L) pack into the grounds of Parliament as police (R) look on during the fifth day of demonstrations against Covid-19 restrictions in Wellington on February 12, 2022, inspired by a similar demonstration in Canada. (Photo by MARTY MELVILLE/

Parliament Speaker Trevor Mallard tried to make the protesters uncomfortable last week by turning on lawn sprinklers and blasting out decades-old Barry Manilow songs and the 1990s hit "Macarena" on a repeat loop.

Police on Monday told protesters to move their illegally parked vehicles as soon as possible, offering them alternative parking at a nearby stadium.

"Wellingtonians have the right to move freely and safely around the city so all roads being clear is a top priority," said Superintendent Corrie Parnell, the Wellington district commander.

The protesters, who oppose coronavirus vaccine mandates and were inspired by similar protests in Canada, appear fairly well organized after trucking in portable toilets, crates of donated food, and bales of straw to lay down when the grass turned to mud. 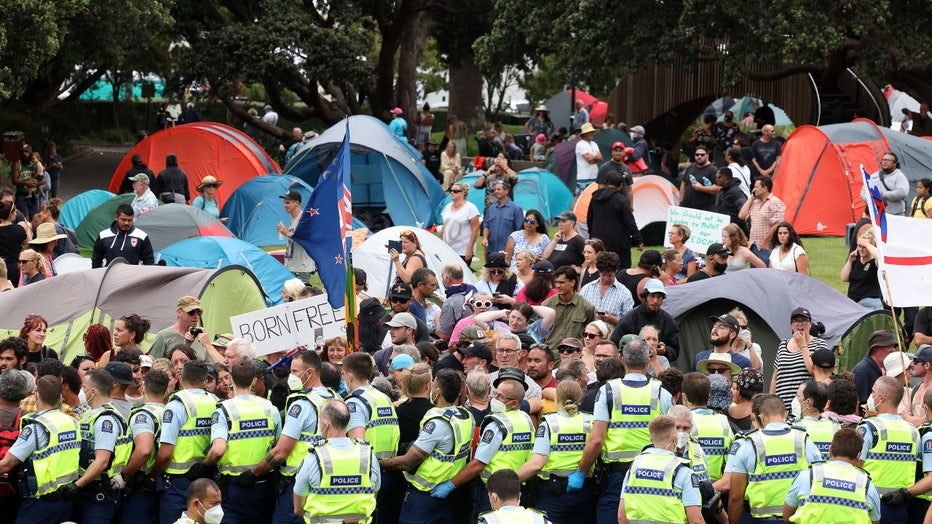 Protesters refuse to leave as police form a line at parliament grounds during the third day of demonstrations against Covid restrictions in Wellington on February 10, 2022. (Photo by MARTY MELVILLE/AFP via Getty Images)

Despite the arrests and scuffles with police last week, dozens of tents remain on Parliament's grounds, with cars and trucks blocking surrounding streets. Protesters lined up on Monday for a breakfast of barbecued sausages and schnitzels after surviving a weekend of torrential rain.

RELATED: 'I understand why, but it makes it harder on us': Canadian trucker talks lost time, money

Kacheeya Scarrow drove her van about 380 kilometers (235 miles) from the town of Taupo to join the camp out.

"All I want is the mandates lifted, and freedom of choice," she said. "I’m not anti-vax, I’m not pro-vax. Everybody should have the right to choose what they want to do with their own body."

Another protester, 70-year-old Joanna Plows, said the government had usurped the right "to choose whether or not we have medical intervention." 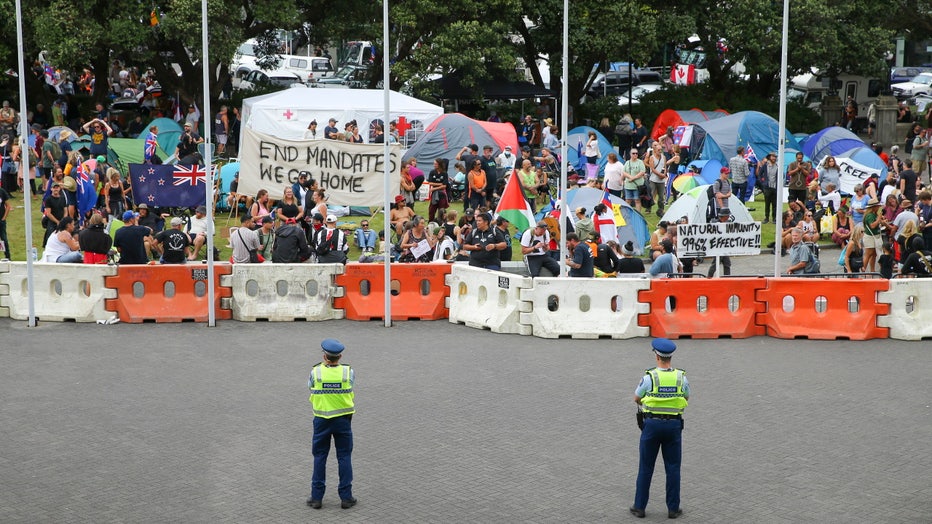 Police look on during a demonstration at Parliament on February 11, 2022 in Wellington, New Zealand. Anti-vaccine and Covid-19 mandate protesters are slowly being broken up by Police after three days of demonstrations outside Parliament. (Photo by Ha

New Zealand has mandated that certain workers get vaccinated against COVID-19, including teachers, doctors, nurses, police and military personnel. A vaccine pass is also required to enter most stores and restaurants.

The protests come just as New Zealand experiences its first widespread outbreak of COVID-19, after keeping its borders closed for much of the pandemic. Daily case numbers jumped to a new high of nearly 1,000 on Monday, up from about 200 per day just five days earlier.

However, not a single patient was in intensive care, thanks in part to a vaccination rate of 77% and what experts have described as the comparatively less severe symptoms of the omicron variant.

New Zealand was spared the worst of the pandemic after it closed its borders and implemented strict lockdowns, limiting the spread of the virus. The nation has reported just 53 virus deaths among its population of 5 million. 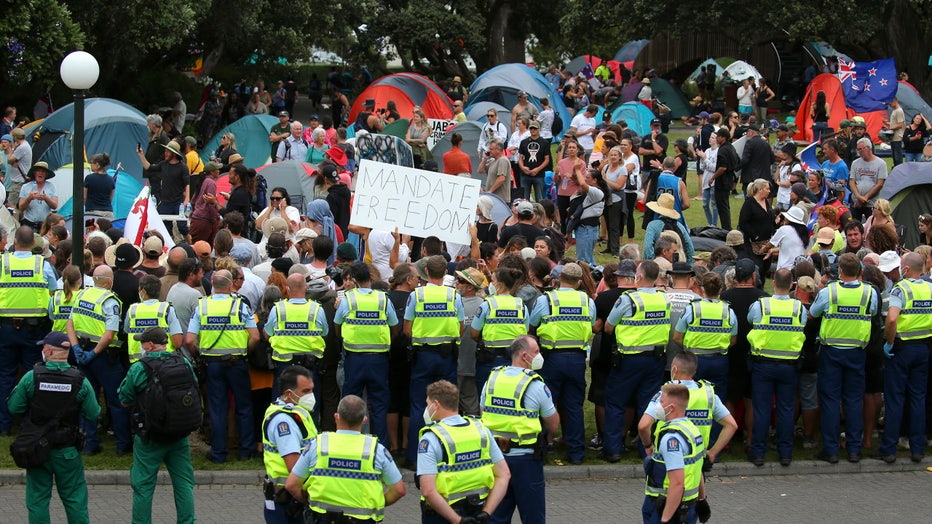 Police officers form a line in front of protesters at Parliament on February 10, 2022 in Wellington, New Zealand. Anti-vaccine and Covid-19 mandate protesters were broken up by police after three days of demonstrations outside Parliament. (Photo by H

Ardern said the timing of the mass camp out couldn't be worse.

"At the very point where we are seeing an increase in cases, and an increase in risk to the public health and wellbeing of New Zealand, they want to see removed the very measures that have kept us safe, well and alive," she said.

MORE: COVID-19 vaccines: will we need more boosters or a new shot?