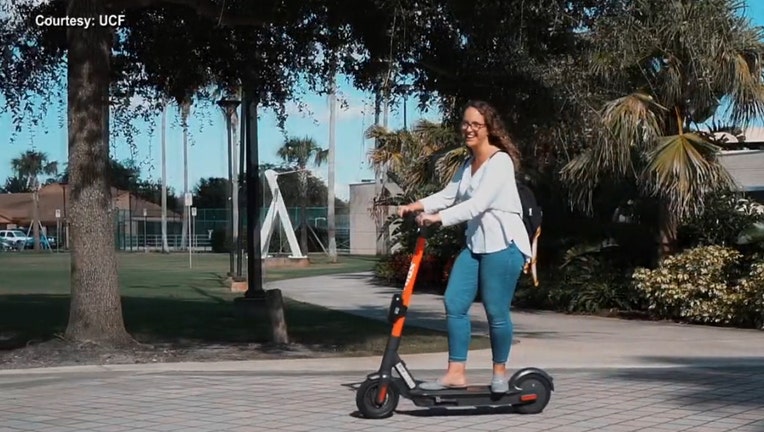 ORLANDO, Fla. - UCF students have a new way to get to class on time as electric scooters called 'Spin' are now spread out across campus for students to rent.

These new Spin e-scooters stand parked at electric docking stations just waiting to be unlocked with a smartphone for just a few dollars. Students can enjoy this high-tech mode of transportation that has the speed to keep up with campus traffic on roads or bike lanes.

The scooters require a little bit of a kick before it gets going, but once riders have that momentum, it is easier to find your balance. Officials said that you still need to wear a helmet while on one of these.

“Depending on how much usage it’s getting, it can go over 10 to 15 miles,” Nabil Syed of Spin said. “The charging capacity on them is so strong that they can actually stay out on the ground for one to three days at a time, which allows us to reduce our carbon footprint by not having to charge them every single day.”

It's the first of its kind on the UCF campus – something students said they wanted here.

“This is something students were asking for during my campaign,” student body president Kyler Gray said. “They had seen in other big metropolitan cities the scooters had been released and thought why not at UCF. We’re 70,000 strong.”

Spin, which is a subsidiary of Ford Motor Company, is rolling out 300 e-scooters on campus with 12 charging stations. Anyone eager to take them for a spin should know that they can only be used on campus and depending on where you are on the GPS, your speed is limited so it will never let you go over 15 miles per hour.

For drivers scratching their heads asking whether this scooter with a motor belongs on the road or on a sidewalk – there’s no clear answer.

“Do what’s most safe for you as well as for the community around you,” Syed said. “So if there’s good bike lane infrastructure, we actually encourage riding the scooters in the bike lane.”

As with any new app, promo codes are accepted. For $5 in free ride credits, use the promo code UCFXSPIN.