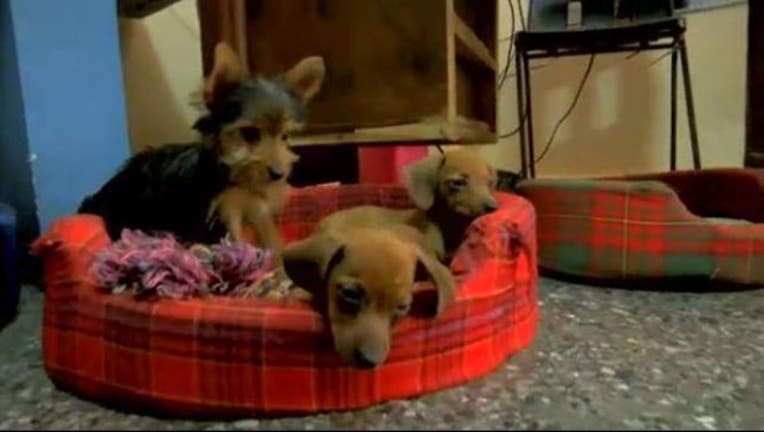 HAVANA (AP) - Lourdes Ortega spent nine years castrating cattle and ridding pigs of parasites until a chronic nerve disease forced her out of veterinary medicine, leaving her struggling for two decades to raise three sons as a single mother on disability.

Then opportunity appeared in the form of a year-old Chihuahua named Macorina.

A university professor who worked nights hired Ortega to feed, walk and groom Macorina in 2013 for $28 a month, more than the average state salary. The little dog became the first client of a flourishing small business once unimaginable in Cuba. Today Ortega's three-room Havana home is a sea of squirming, yipping beagles, Chihuahuas and dachshunds, bringing in enough income to keep Ortega's family fed and to build new rooms to house more dogs.

Cuba's growing upper-middle class has a thing for fancy dogs, and is spending relatively big sums to pamper them. Dozens of dog salons, boutiques and purebred puppy sellers have cropped up across Havana in recent years, creating hundreds of jobs and a series of small reminders of the widening income gap in a society that strived for decades to be a land of absolute equality.

"There are a lot of people who've traveled overseas, who've opened business and who have had better economic opportunities," Ortega said. "This is really a service for people with means, one that most Cubans don't have access to."

"It's really a new way of thinking in our country," she said.

A handful of organizations work to spay and neuter street dogs and find homes for their offspring, but Cubans with means prefer to spend between $100 and $300 on purebred puppies sold by word of mouth or on classified websites that advertise breeds ranging from American Staffordshire terrier to Pomeranian. In a country where cars and new homes are out of touch for even the prosperous, a purebred dog is an affordable status symbol that offers a return on investment in the form of future puppies to sell.

On Monday morning, a line of about a dozen people cradling mostly purebreds stretched out the door of Luis Chow Chow, a full-service breeder and groomer in the working-class neighborhood of El Cerro.

Owner Luis Aguiar said the family-run business saw between 40 and 50 animals a day for services ranging from ear-cleaning to washing and brushing.

In the back of the line stood Yasmil Fernandez, 27, and Ernesto Borges, 26, a couple who run a design and marketing firm for private business owners out of their apartment. Fernandez cradled Luca, a teacup-size 45-day old Rottweiler puppy who nipped at her gold chain as they waited.

The dog cost $100 when they bought him last week, Borges explained, but the breeder had left him malnourished and upkeep was not going to be a matter of simply feeding him table scraps.

"For this one, we need to buy meat," Borges said.

Aguiar charges about a dollar for routine visits, within the means of Cubans who have private-sector jobs or help from relatives overseas. For the wealthier, there are special services like home grooming visits than run up to $10 per session.

"People are tending toward purebred dogs and that brings with it a whole care regimen that's more involved than with mixed-breeds," Aguiar said. "Cubans in general are starting to realize what a dog is worth."