In a criminal complaint detailing espionage-related charges against Jonathan Toebbe, the government said he sold information for nearly the past year to a contact he believed represented a foreign power.

YOKOSUKA, Japan - A U.S. Navy attack submarine was determined to have hit an uncharted underwater mountain last month, officials said in a statement following an investigation.

A statement issued Monday revealed that the nuclear-powered USS Connecticut struck a seamount — or underwater mountain.

The incident happened on Oct. 2 in the South China Sea but was not reported by the Navy until five days later. It was not immediately announced in order to maintain operational security, two Navy officials told the Associated Press, speaking on the condition of anonymity.

The vessel sailed to Guam for a damage assessment, where it remains.

"The investigation determined that Connecticut grounded on an uncharted seamount while operating in international waters in the Indo-Pacific region," the U.S. 7th Fleet commander said in a statement Monday. "Commander, U.S. 7th Fleet will determine whether follow-on actions — including accountability — are appropriate." 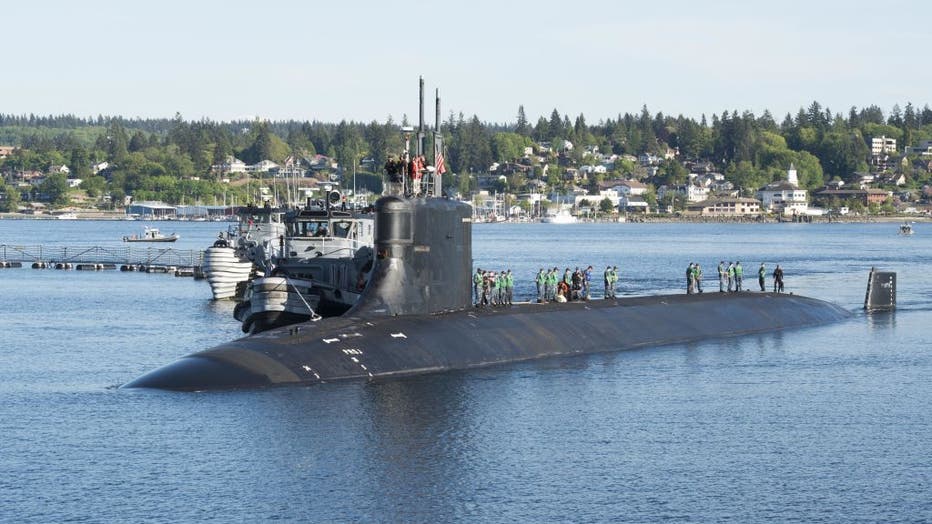 FILE - Photograph of submariners standing on top of the Seawolf-class fast-attack submarine USS Connecticut in the water at Naval Base Kitsap-Bremerton on May 7, 2018. (Photo by Smith Collection/Gado/Getty Images)

The Navy has said that the submarine’s nuclear reactor and propulsion system were not damaged. Two sailors sustained moderate injuries and about nine others had minor injuries like scrapes and bruises, the officials told the Associated Press. All were treated aboard the sub.

USNI News, which was first to report that the submarine had struck a seamount, said damage to the forward section of the sub included its ballast tanks. The Navy has yet to fully explain how or why the sub struck the seamount or to reveal the extent of damage to the Seawolf-class submarine.

Connecticut is one of three nuclear-powered fast attack submarines in service with the U.S. Navy. The boats were developed for deep-water operations to take on Soviet submarines in the open ocean, according to USNI News. Since the end of the Cold War, the trio has been upgraded "to carry out some of the Navy’s most sensitive missions."

In response to the Navy’s statement, China on Tuesday accused the U.S. of a "lack of transparency and responsibility" regarding an accident. Foreign Ministry spokesman Wang Wenbin said the U.S. should provide full details of the incident that has revived a dispute between the two countries over the strategic waterway.

"We once again urge the U.S. to give a detailed account of the accident," Wenbin said at a daily briefing.

China claims sovereignty over virtually the entire South China Sea, through which trillions of dollars of international trade pass each year. Six governments claim islands, atolls and exclusive economic zones in the sea, while the U.S. insists that freedom of navigation be maintained — reinforcing that with regular military flights and naval patrols and training missions around the region.

Wenbin said the U.S. has so far failed to offer "a clear explanation" of what the Navy nuclear submarine was doing in the area, as well as "the specific location of the accident, whether it was in another country’s exclusive economic zone or even territorial waters, whether it caused a nuclear leak or damaged marine environment."

RELATED: American submarine sunk with 80 aboard during WWII discovered off coast of Japan