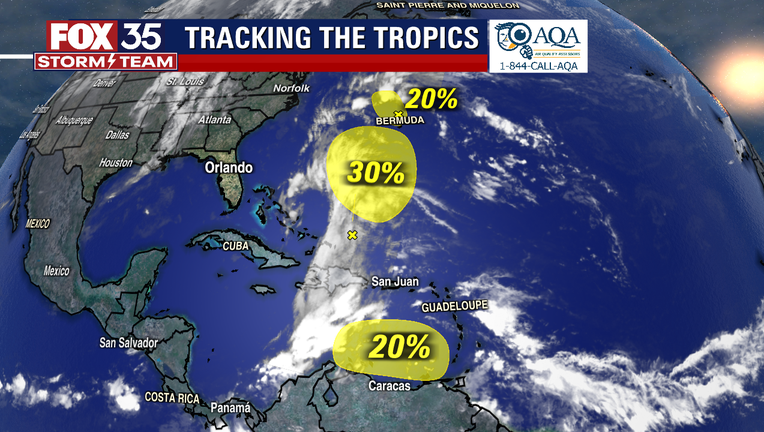 The tropics are getting busy! A new disturbance appeared in the Eastern Caribbean Tuesday morning, according to the National Hurricane Center, becoming the third system forecasters are monitoring.

All three areas have the potential for development over the next five days. Disturbance 3, the system in the Caribbean has a 20% chance of forming by as early as this weekend.

"Environmental conditions are forecast to be conducive for gradual development as the low drifts westward or west-northwestward over the eastern Caribbean this weekend," the NHC said.

Elsewhere in the Atlantic basin are Disturbance 1, which is located just west-northwest of Bermuda and Disturbance 2, which is expected to form midway between Puerto Rico and Bermuda in a couple of days.

Disturbance 1 will bring heavy rain and gusty winds to Bermuda through Tuesday morning, regardless of it 40% chance of formation over the next five days, according to the NHC.  Forecasters said the system "is expected to move northward towards cooler waters and into a region of unfavorable upper-level winds by tonight, which should limit further development."

As for Disturbance 2, environmental conditions appear conducive for gradual subtropical development of this system while it meanders over the southwestern Atlantic through the weekend, the NHC said.

Will it impact Florida?

Impacts to Florida remain unlikely, according to FOX 35 Storm Team.

Continue to check in with us at FOX 35 for more updates in the tropics. The 2022 Atlantic Hurricane season runs through Nov. 30.