Dr. Anthony Fauci on COVID-19 vaccine efficacy and the potential need for boosters

Fauci said it is entirely conceivable that vaccinated people may need to get booster vaccines down the road, but he doesn’t yet know what the intervals will be between getting a vaccine and a potential booster shot — if booster shots ever come.

Moderna’s CEO, Stéphane Bancel, said he anticipates the world will see many covornavirus variants in the months ahead as it races to vaccinate the population against COVID-19 and stem the pandemic.

Bancel added that the company hopes to have a booster shot for its two-dose vaccine by the fall in case it's needed against the troubling new variants.

"I anticipate in the next year or so, we’re going to see a lot of variants," Bancel said Wednesday during an interview with CNBC’s "Squawk Box." "But as more and more people get vaccinated or naturally infected, the pace of the variant is going to slow down and the virus is going to stabilize like you see with flu."

The vaccines currently being rolled out across the U.S. offer strong protection. But studies of experimental updates to the vaccines are critical if the virus eventually outsmarts today’s versions of the shots.

The Massachusetts-based Moderna hopes to submit its data to regulators within a few months, Bancel added.

"Our goal is to work really hard to get this ready before the fall," Bancel said. "I want to make sure there are boost vaccines available in the fall so that we protect people as we go into the next fall and next winter season in the U.S." 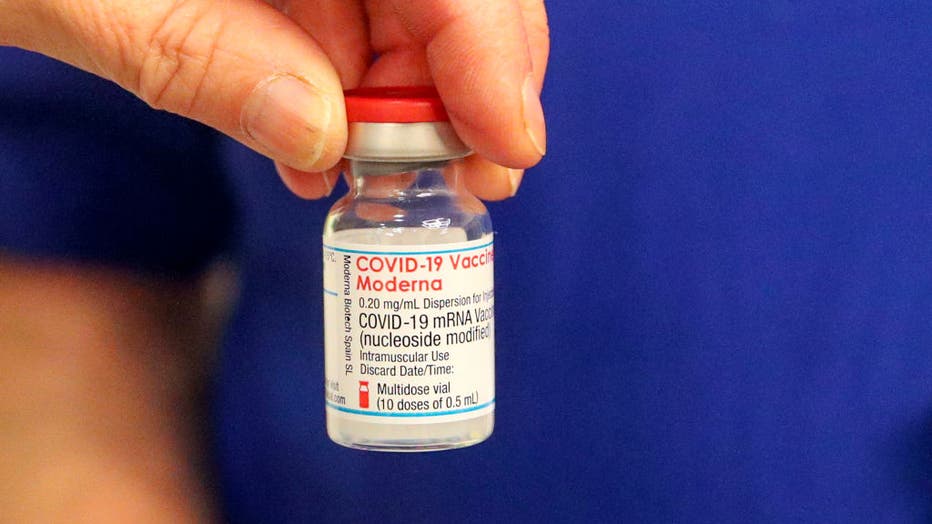 FILE - A vial of the Moderna COVID-19 vaccine is prepared at a vaccination center at the Madejski Stadium on April 13, 2021 in Reading, England. (Photo by Steve Parsons - WPA Pool/Getty Images)

Viruses constantly evolve, and countries are racing to vaccinate millions and tamp down the coronavirus before even more mutants emerge. More than 122 million Americans have had at least one vaccine dose, and nearly 23% of the population is fully vaccinated, according to the U.S. Centers for Disease Control and Prevention. Much of the rest of the world is far behind that pace.

Dr. Anthony Fauci, the nation’s top infectious disease expert, said he feels confident in current indications of the enduring efficacy of shots, but called the emerging variants a "wild card" in the question of whether booster shots will, in fact, be needed down the road. The more contagious B.1.1.7 variant that was originally detected in the U.K. has become the most common strain circulating in the U.S.

Vaccine makers and researchers are also trying to determine exactly how long COVID-19 inoculations protect people. According to a recent study from Pfizer, the company’s COVID-19 vaccine maintains more than 90% efficacy at six months after receiving the second dose.

On Tuesday, Moderna released similar findings. The company said its vaccine was also more than 90% effective at protecting against COVID-19 and more than 95% effective against severe disease up to six months after the second shot.

For health care workers and others who were among the earliest to be vaccinated in December, there isn’t enough data yet to say for certain just how long they can expect to be fully protected. Fauci said it’s too soon to tell.

"We don’t know the answer to that for the simple reason that we don't know what the durability of the protection against the standard virus is," Fauci told FOX Television Stations last week. "The most recent reports said at least six months but it might be much longer than it could be years for all we know."

Fauci added that it’s conceivable that vaccinated people may need to get booster vaccines down the road, but he doesn’t yet know what the intervals will be between getting a vaccine and a potential booster shot.

It’s also "feasible" that there may not be a need for COVID-19 booster shots, according to Fauci. But he added that the National Institutes of Health and the U.S. Centers for Disease Control and Prevention are preparing for all scenarios.

"You want to be prepared in case you have to," Fauci said. "So we’re making the assumption that we’re going to have to boost people, but we may not have to."