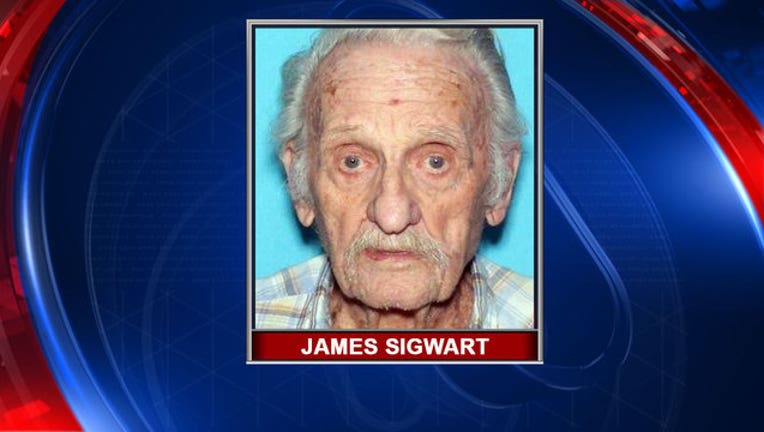 DELAND, Fla. (WOFL FOX 35) - UPDATE: We are happy to report that James Sigwart, 91, has been located in Georgia and is safe.

The Volusia County Sheriff's Office is asking for the public's help in locating a missing 91-year-old man who hasn't been seen since this morning.

James Sigwart, 91 of the 4000 block of Woodland Circle in DeLand, was last seen at his home around 10 a.m.  He is believed to be traveling in his vehicle, a red 2007 Dodge Caravan with Florida tag K67-5JA. He was last seen wearing a blue and white striped shirt, blue jeans and black shoes. He is listed as 5 feet, 10 inches tall and 140 pounds with gray hair and blue eyes.

Sigwart has dementia, according to authorities, and does not have a cell phone. He has a friend in the Orange City area who has not seen or heard from him, either. His direction of travel is unknown.

The Florida Department of Law Enforcement has issued a Silver Alert for Mr. Sigwart.  Anyone with information about his whereabouts is asked to contact the Sheriff's Office at 9-1-1 or 386-736-5999.

UPDATE: The Volusia County Sheriff's Office sent out the following press release Tuesday updating the status of James Sigwart and how assistance is still needed.

Overnight, FDLE received a report of a possible sighting of Mr. Sigwart's Dodge Caravan in the Pasco/Hernando County area. Local authorities in that area were unable to locate the vehicle. An investigator is meeting with the family this morning and reviewing all possible details about Mr. Sigwart's habits and interests, and the locations of other family members. Mr. Sigwart doesn't have a cell phone; his credit card shows no recent activity. He has not made any phone calls or contacted family members.

He likes to frequent the Foxhead Lounge in Osteen and a friend's home in Orange City, and deputies continue to check those areas. Although hospitals were checked last night, we are checking them again. And we are using Air One to search these areas and the area surrounding Mr. Sigwart's residence, looking for his red 2007 Dodge Caravan.