MINNEAPOLIS, MN - MAY 26: Tear gas is fired as protesters clash with police while demonstrating against the death of George Floyd outside the 3rd Precinct Police Precinct on May 26, 2020 in Minneapolis, Minnesota. Four Minneapolis police officers have been fired after a video taken by a bystander was posted on social media showing Floyd's neck being pinned to the ground by an officer as he repeatedly said, "I can’t breathe". Floyd was later pronounced dead while in police custody after being transported to Hennepin County Medical Center. (Photo by Stephen Maturen/Getty Images)

MINNEAPOLIS (FOX 9) - Protesters gathered at the location where a man died in Minneapolis Police custody Monday evening, signaling their intent to fight for justice in the case.

The protest began at the corner of 38th and Chicago on the south side of Minneapolis. Protesters were seen blocking the intersection by sitting in the crosswalks and using their own vehicles to block traffic.

In a protest that continued into the night, protesters were seen throwing rocks through 3rd precinct windows and damaging Minneapolis Police squad cars.

Police were seen using tear gas to disperse the unruly crowds that stayed in the area into the night as rain fell Tuesday. 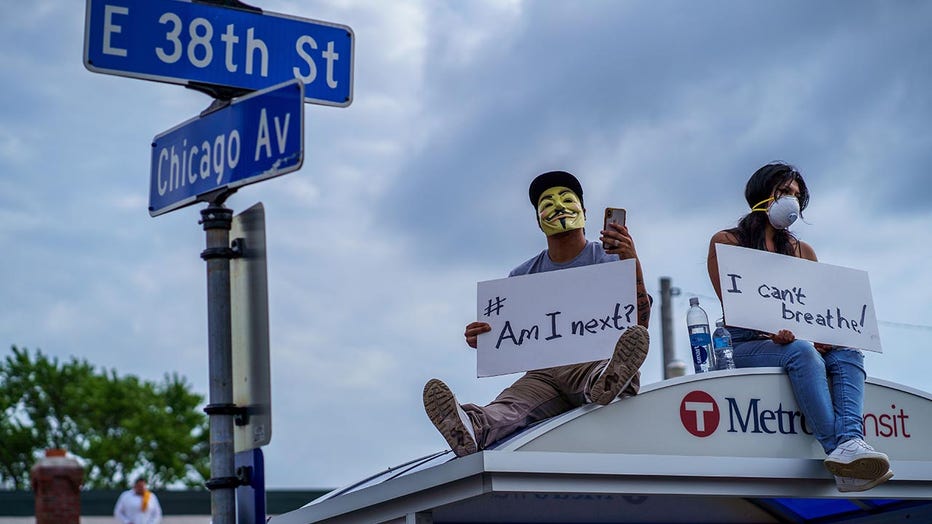 People hold signs and sit on a bus stop during a protest near where a Minneapolis Police Department officer allegedly killed George Floyd, on May 26, 2020 in Minneapolis, Minnesota. - A video of a handcuffed black man dying while a Minneapolis office (KEREM YUCEL/AFP via Getty Images) 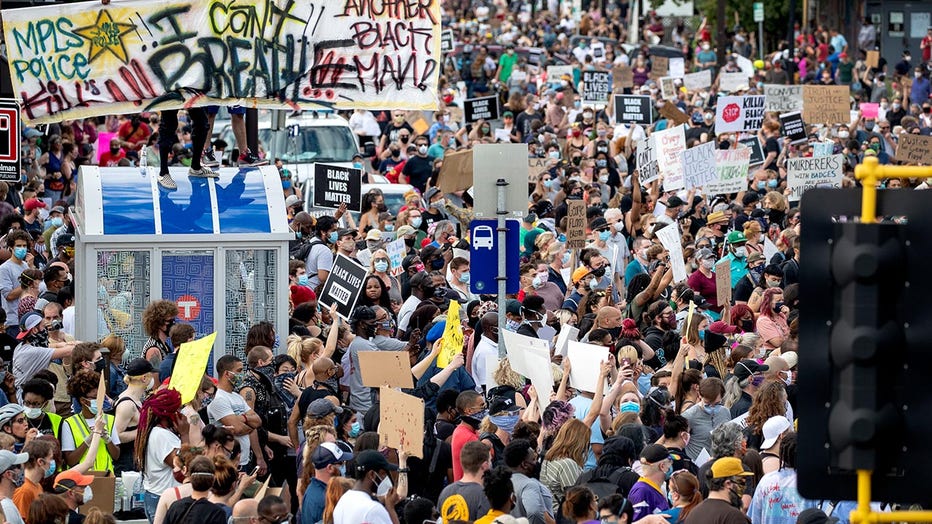 People gathered at Chicago Ave. and East 38th Street during a rally in Minneapolis on Tuesday, May 26, 2020. Federal authorities are investigating a white Minneapolis police officer for possible civil rights violations, after a video surface showing (Carlos Gonzalez/Star Tribune via Getty Image) 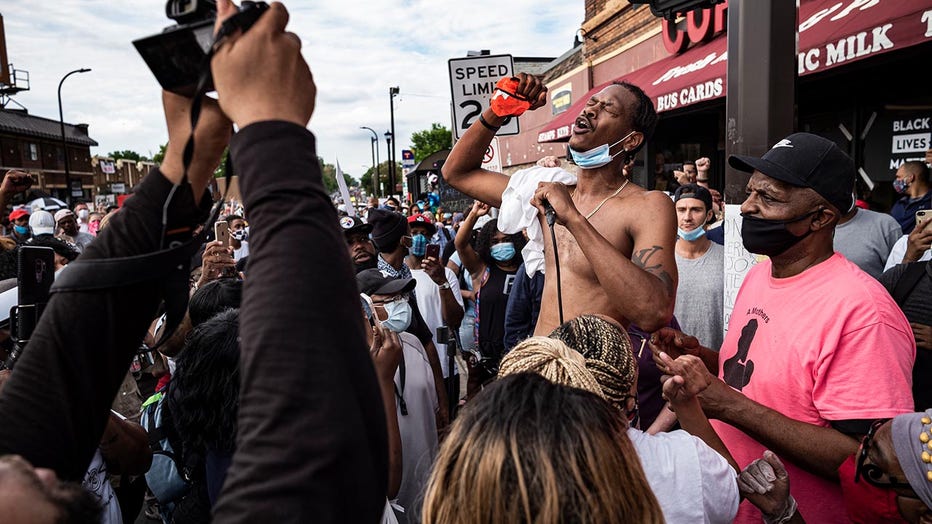 People gathered at Chicago Ave. and East 38th Street during a rally in Minneapolis on Tuesday, May 26, 2020. Federal authorities are investigating a white Minneapolis police officer for possible civil rights violations, after a video surface showing (Richard Tsong-Taatarii/Star Tribune via Getty Images)

People said their community is mourning the loss of George Floyd, who was seen saying “Please, please, I can’t breathe,” on video of the incident. Now, protesters are saying they will fight for justice. All four officers involved in the incident have been fired.

Following the death of George Floyd, protesters took to the streets in Minneapolis. 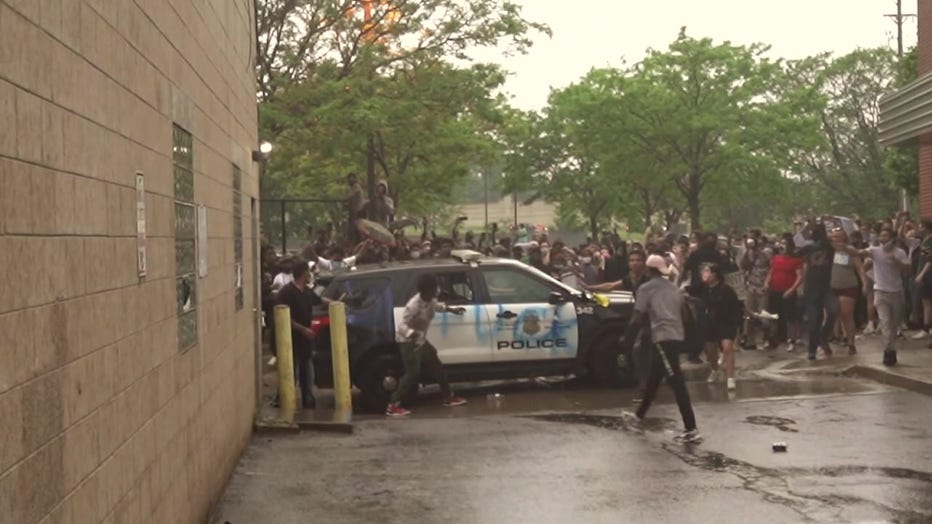 Protesters continued to block traffic and keep the roads closed into the evening. As the crowds grew, the ACLU of Minnesota reminded protesters to keep their distance to help stop the spread of COVID-19. 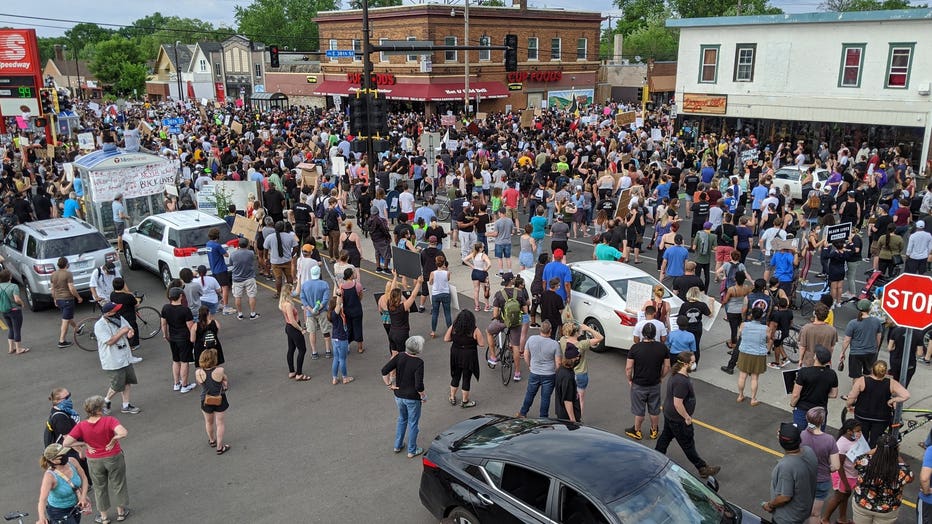 A protest into the death of George Floyd while in police custody Monday night swelled at the intersection where the incident happened.

Protesters gather in Minneapolis after man dies in police custody

Later Tuesday night, Minneapolis Police responded to a shooting in the area of 38th and Chicago. Gunshots could be heard in video of the incident obtained by FOX 9. Police say one individual sustained non-life threatening injuries in that incident.

Shooting near 38th and Chicago in Minneapolis

Gunshots can be heard at 38th and Chicago Tuesday night where protesters gathered earlier in the day. Large scale protests were already occurring at the 3rd Minneapolis Police precinct when this shooting occured. (Alex Kjornes)