How Biden plans to distribute free COVID-19 at home tests

WASHINGTON (AP) - Nearly half of the 500 million free COVID-19 tests the Biden administration recently made available to the public still have not been claimed as virus cases plummet and people feel less urgency to test.

Wild demand swings have been a subplot in the pandemic, from vaccines to hand sanitizer, along with tests. On the first day of the White House test giveaway in January, COVIDtests.gov received over 45 million orders. Now officials say fewer than 100,000 orders a day are coming in for the packages of four free rapid tests per household, delivered by the U.S. Postal Service.

Still, the White House sees the program as a step toward a deeper, yet more elastic, testing infrastructure that will accommodate demand surges and remain on standby when cases wane. "We totally intend to sustain this market," Dr. Tom Inglesby, testing adviser to the COVID-19 response team, told The Associated Press. "We know the market is volatile and will come up and down with surges in variants."

The White House says Americans have placed 68 million orders for packages of tests, which leaves about 46% of the stock of tests still available to be ordered.

Testing will become more important with mask requirements now easing, say some independent experts. "If infection control is still our priority, testing is central," said Dr. Leana Wen, a former Baltimore health commissioner and commentator on the pandemic. "Four tests per household for one family will only last you one time. There should be enough tests for families to test twice a week."

Inglesby maintains that the pieces are falling into place to accommodate that. 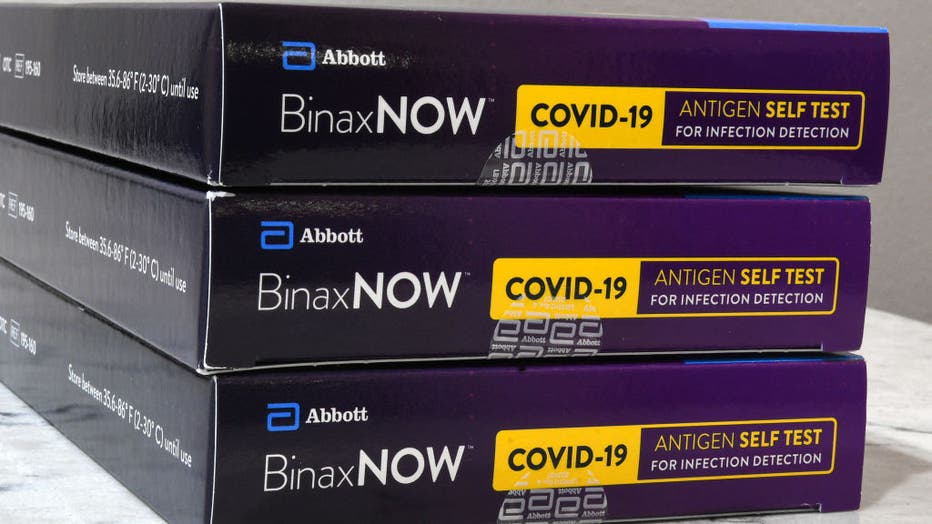 In this photo illustration, the Abbott's at-home covid-19 rapid test kits are seen on display in Orlando. (Photo Illustration by Paul Hennessy/SOPA Images/LightRocket via Getty Images)

Private insurers are now required to cover eight free rapid tests per person, per month. Medicare coverage will start in the spring. The administration has also been making free at-home tests available through libraries, clinics and other community venues. Capacity for the more accurate PCR tests performed by labs has been built up. The White House recently put out a request to industry for ideas on how to sustain and expand domestic testing for the rest of this year.

Wen says people still need a guide for when to test and how often. "Right now it is still unclear," she said.

RELATED: Is omicron leading us closer to herd immunity against COVID-19? Experts weigh in

President Joe Biden's pivot to testing came under duress as the omicron variant gained force just before Christmas. Tests were frustratingly hard to come by, and expensive. The White House is sensitive to criticism that help may have come too late.

"There is no question some people found out they were positive from taking one of these tests and were able to keep other people from getting infected," said Tim Manning, supply coordinator for the COVID-19 response team.

Around mid-December, with omicron projections grimmer by the day, White House officials began discussing how to make free tests available for anyone who wanted one. But if the government started siphoning up tests on the market, that would just make the shortage worse.

"A critical thing to us was that anything we did had to be done in a way did not create a shortage at retail to the general public," Manning said.

The White House enlisted the Pentagon and parts of the Health and Human Services Department that had worked on the Trump administration's vaccine development effort to distribute vaccines. Logistics experts scoured the globe for available tests. The Postal Service was designated to take the orders and deliver them.

That part proved to be a good call, said Hana Schank, an expert on government technology projects with the New America think-tank. The Postal Service already had a database of every address in the land, and the means to deliver.

"At the federal level the only people who have a database connected to a fulfillment engine would be the Post Office," she said.

The project took less than a month to get ready, Manning said. "We said this is not online retail," he said. "This is emergency response, so we have go to as fast as possible."

To make sure it wasn't just the tech savvy who would end up getting free tests, the administration targeted a share of deliveries to people in low-income areas. The White House worked with service organizations to get the word out.

"We prioritized the processing of orders to the highest social vulnerability zip codes in the country," testing adviser Inglesby said.

One of the service groups was the National Association of Community Health Workers, whose members help people navigate the health care system. Executive director Denise Smith said the group was able to use its website to link more than 630,000 people to COVIDtests.gov.

Overall about 20% to 25% of the tests have gone to people in distressed areas, officials said.

Now that demand is way down, it's unclear what will happen to the White House giveaway program. Allowing repeat orders is one possibility.

Smith says groups like hers should get any surplus. "We know where the people are," she said.

Although the program is still in its infancy, analyst Lindsey Dawson of the Kaiser Family Foundation believes its legacy may lie in familiarizing more people with testing. "It may get someone comfortable with utilizing the tests, thinking about how they might use testing in their lives," she said.

Savita Sharaf, a retiree from the Maryland suburbs outside the nation's capital, said she ordered her free tests around the middle of January and got them in early February. She's tried to conserve them, for added peace of mind. In the stores, she couldn't find tests for less than $25.

"I'm so relieved because I can immediately test myself," Sharaf said. "If we had a high vaccination rate, it would be a little easier to say let up on this program. But I feel we have to watch for the next month or two, to see what happens."