It was a public spat caught on the steps of the US Capitol Friday over the abortion issue.

FOX 2 - Michigan Democrat Congresswoman Debbie Dingell got into it on the steps of the Capitol Building with Georgia Republican US Rep. Marjorie Taylor Greene Friday - and cameras were rolling.

Greene was involved in a shouting match with Dingell (D-Dearborn) over the subject of abortion as a group of Democrats were posing for a photo-op after just passing the Women's Health Protection Act. The move is an attempt to protect the 1973 Roe v. Wade decision against possible future US Supreme Court Action.

"Horrendous," Greene appeared to yell in various recordings shared online. "You should all be ashamed."

"We have lots of laws we follow," Dingell retorted. "You should practice the basic thing you're taught in church: Respect your neighbor."

Greene fired back, "Taught in church? Are you kidding me? Try being a Christian and supporting life."

"You try being a Christian and treat your colleagues decently," Dingell snapped.

Dingell then appeared to stumble down one of the Capitol steps and was helped by fellow Democrat Rep. Frank Pallone who steadied her.

"Watch your step, lady. You're going to fall down," Greene said. "Control yourself." 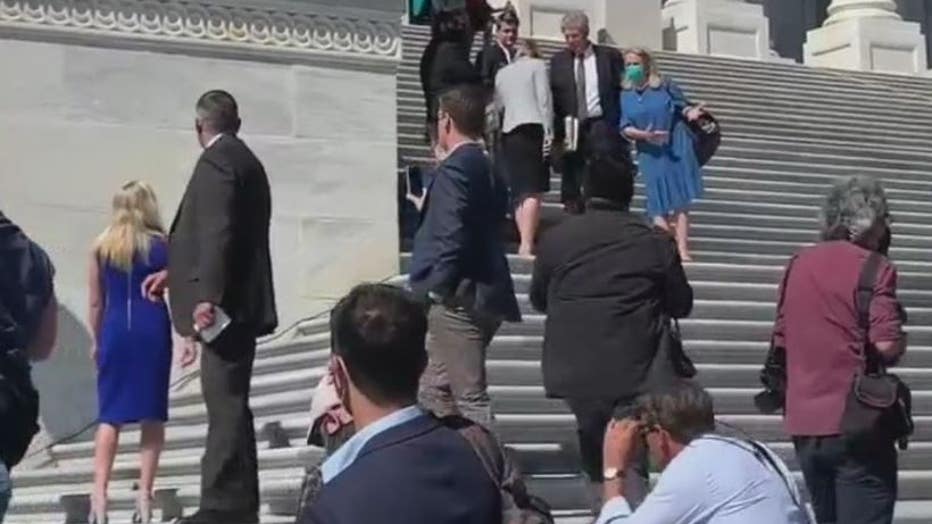 Dingell's staff released a statement about the altercation, claiming she was "attacked" by Greene who was "heckling and yelling (maskless)" - although they were outdoors and beyond six feet apart.

"She stood at the top of the Capitol steps and yelled at a group of us," Dingell said Friday night. .

FOX 2 spoke with Dingell after this encounter from about noon earlier today.  Dingell tells us Greene had been yelling for 10 minutes before she stepped in.

"I don’t want anybody to copy me, but I don’t think people have to put up with bullying," she said. "I’ve been bullied at too many points in my life.

"I was just wanted her to be civil, because she does come after people. None of us wants to push back, but I will tell you - she did leave."

On video you can see Greene walking away. Speaker Nancy Pelosi was about to give a press conference on the Women’s Health Protection Act, which Democrats passed in the House in a mostly party line vote.

It’s an attempt to continue providing women access to abortion. Greene vehemently expressed her pro-life position, but also her stance on other topics of the day.

The confrontation then moved online - Dingell tweeting to be a good neighbor and don’t mess with Michigan women.

Greene responding with "1- ALL House Democrats are evil and will kill unborn babies all the way up to birth & then celebrate. 2- You might fall down the stairs when your unhinged & hypocritically preaching about being civil, going to church & killing babies. You’re a joke"

That last part a shot at Dingell stumbling slightly as the exchange culminated.

FOX 2: "Do you think she went there to provoke?"

"I do believe that," Dingell said. "But I would still sit down with her and say why do we have to do that."

FOX 2 reached out to Congresswoman Greene’s offices in DC and Georgia but received no response by newstime.

Dingell's office's full statement is below:

"Today Rep. Marjorie Taylor Greene attacked Democrats on the steps of the Capitol, heckling and yelling (maskless) after passing the Women's Health Protection Act. Debbie Dingell stood up against MTG, proving that she is the tough leader we need in Congress who is willing to fight for progress and for us.

"We know that women from Michigan get the job done, and today, Debbie stood up against a bully heckling her colleagues on the steps of the United States Capitol. Republicans like MTG are not going to back down and they're going to keep spreading misinformation and making attacks against Democrats' agenda in Congress."