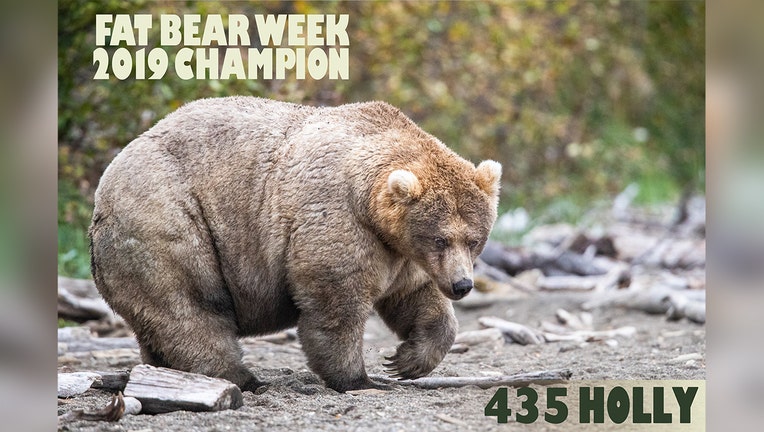 The park is home to nearly 2,000 brown bears and had announced this year’s bracket pitting 12 of its burliest against each other for its annual single-elimination tournament.

The Park announced the winner of the competition Tuesday, congratulating Holly on her massive accomplishment.

“She is fat. She is fabulous. She is 435 Holly. And you voted her the 2019 Fat Bear Week Champion,” said the Katmai National Park & Preserve. “All hail Holly whose healthy heft will help her hibernate until the spring. Long live the Queen of Corpulence!”

The competition began Oct. 2, when followers of the park’s Facebook page were able to cast their votes by liking the photos of their favorite robust contestant.

According to the park, the competition followed each bear’s build up of critical fat reserves in preparation for their winter hibernation during which they consume “one year’s worth of food in six short months.”

Last year’s competition saw 23-year-old 409 Beadnose take the prize thanks to a photo of her looking perfectly content and rotund. Unfortunately, 409 Beadnose did not participate in this year’s tournament.

While the competition is fun and remains a staple of the park, it is meant to bring awareness to the importance of parks such as the Katmai National Park & Preserve.

“The brown bears are a symbol of Katmai and Bristol Bay’s healthy ecosystem and serve as a reminder on why we need to support sustainable fisheries and wild areas like Alaska’s national parks,” Mike Fitz, a resident naturalist with Explore and former Katmai park ranger told Anchorage Daily News.