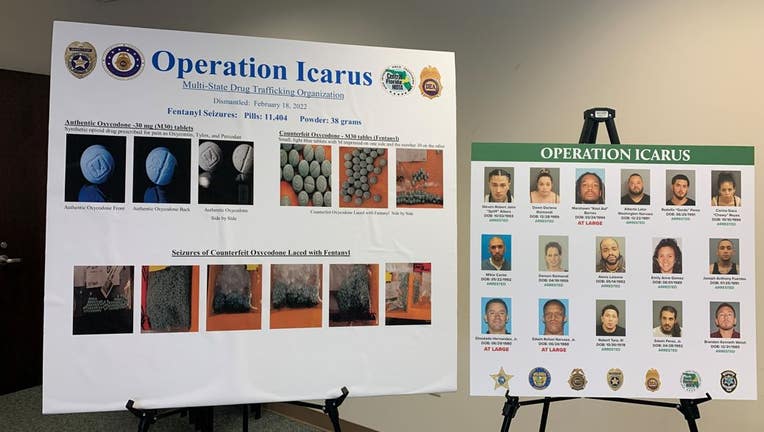 ORLANDO, Fla. - The Florida Metropolitan Bureau of Investigation announced the arrests of 16 people who were allegedly part of a drug trafficking operation to distribute and sell cocaine and pressed fentanyl pills in Central Florida.

MBI Director Ron Stucker alleged that members of the drug trafficking organization were responsible for bringing thousands of fentanyl-laced pills disguised as oxycodone into Central Florida. He estimated that the street value of the pills was worth around $300,000, though it was unclear how many pills were ultimately sold.

"This is particularly dangerous. Fentanyl is about 100 times more potent than oxycodone," he said. Fentanyl is already a highly addictive pain pill.

"The danger here is you may have somebody who has had chronic pain, and they've become addicted or dependent on pain pills. They're going to the street to get that supply now. They think they're buying oxycodone, but instead, someone is selling them a substance that is 100 times more potent than that," Stucker said.

Among the opioid epidemic, officials have increasingly warned about the dangerous effects of fentanyl.

Authorities said the investigation began in April 2021 after the Florida Department of Corrections discovered an inmate was trying to smuggle Xanax into the Orange County Jail. From there, they discovered the alleged leader of the drug organization, who was apparently leading the fentanyl operation from jail.

"(Drug dealers) know it's killing people in our community. They know how dangerous it is, and they don't care," Stucker said.

All sixteen people were booked into jail under suspicion of various charges. Among them, racketeering, conspiracy to commit racketeering, trafficking in cocaine, and introduction of contraband into a county facility.