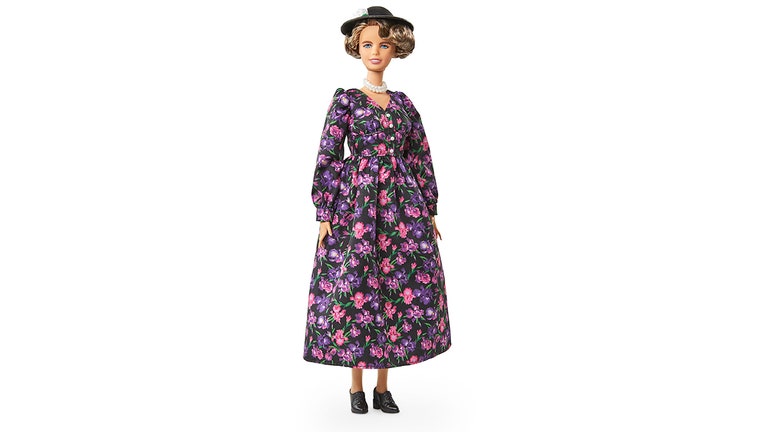 The doll was unveiled to the public through social media posts shared by the brand’s verified accounts.

"All great change begins with believing you can," the Barbie Twitter account wrote on Wednesday. "Barbie is proud to honor Eleanor Roosevelt as the newest in the line of Inspiring Women. A lifelong humanitarian, she redefined the role of women in politics and public life."

Another tweet commended Roosevelt for her "years of service" where "she used her voice to lift up others and inspired generations to speak up."

While she was in the White House, Roosevelt was a spokesperson and diplomat for the United Nations. She also became a humanitarian who fought to advance child welfare, housing reform and equal rights for women and racial minorities, according to Britannica.

The Eleanor Roosevelt Barbie wears a floral-patterned dress that Barbie Signature Designer Carlyle Nuera believes is a reflection of the first lady’s style.

"She wasn’t afraid of a bold print, which I think is reflective of the bold advocacy she had for the rights of different marginalized groups like Asian Americans, Black Americans, and women," Nuera said about the first lady’s documented fashion choices. "And also in my research, I found that there's a type of iris named after her, a beautiful deep purple iris, which is what inspired the print on her dress."

The announcement of the Eleanor Roosevelt Barbie comes two days after the start of Women’s History Month. It also comes five days before International Women's Day, which is set to take place on Monday, March 8.

Barbie fans who want to add the historic doll to their collection will have to pay $29.99, not including tax.

According to an older press release, Mattel’s Inspiring Women line was introduced in 2018 on International Women's Day.

"As a brand that inspires the limitless potential in girls, Barbie will be honoring its largest line up of role models timed to International Women's Day because we know that you can't be what you can't see," said Lisa McKnight, a senior vice president and general manager at Barbie. "Girls have always been able to play out different roles and careers with Barbie and we are thrilled to shine a light on real life role models to remind them that they can be anything."