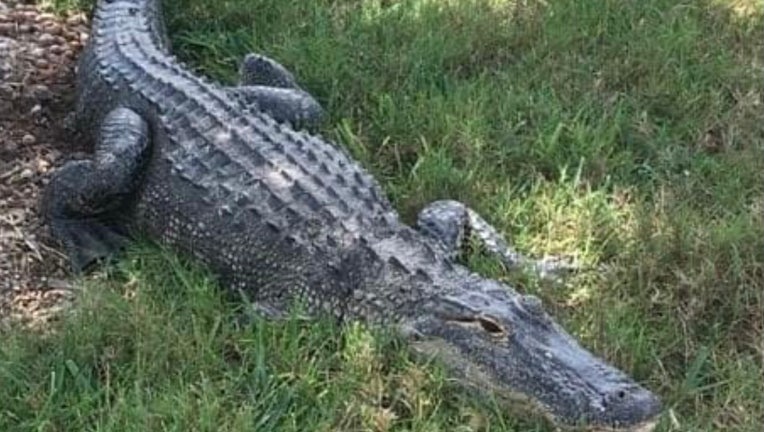 VENICE, Fla. - Alligators in Florida are out and about looking for love during this mating season, but they also apparently like to chill out by the pool when it gets too hot.

Police in Venice were called to a home after a massive gator was found near a pool!

Photos posted to Facebook by the department show the gator relaxing in some grass before being removed.

"As a reminder, warm spring weather means alligators are more active and more visible, the Florida Fish and Wildlife Conservation Commission says. Courtship begins in April then mating happens in May or June, according to FWC," police wrote on Facebook.

"Rising temperatures increase an alligator's metabolism, which means they begin seeking prey, according to FWC. It also means they'll be observed basking in the sun as they regulate their body temperature."

The Hillsborough County Sheriff's Office recently shared body cam video of a monster 10-foot alligator that was found under a parked car at a Tampa apartment complex.

During another incident, a homeowner in East Lake got quite a surprise with his morning coffee after finding a massive alligator - between 7 and 9-feet long - on the lanai of his Pinellas County home before it took a swim in his pool!

FWC warns you to keep your distance if you spot an alligator.