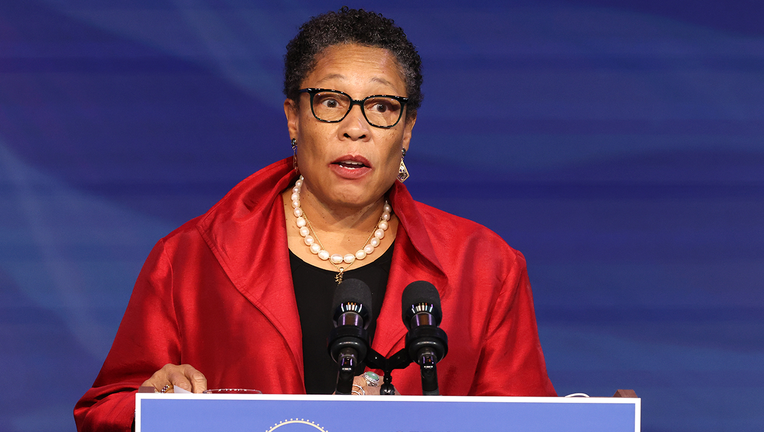 Rep. Marcia Fudge (D-OH) delivers remarks after being introduced as U.S. President-elect Joe Biden’s nominee to head the Department of Housing and Urban Affairs at the Queen Theater on December 11, 2020 in Wilmington, Delaware.

WASHINGTON - The Senate voted Wednesday to confirm Rep. Marcia Fudge as the new secretary of Housing and Urban Development.

Fudge will be just the second Black woman to lead HUD in its history and the first woman to do so in more than 40 years.

Fudge, who represents the 11th district of Ohio, will leave her seat to become a member of President Joe Biden’s cabinet, overseeing HUD — which develops and implements national policy and programs involving housing needs.

The congresswoman will take over from acting HUD Secretary Matt Ammon, who was preceded by former President Donald Trump’s appointee Dr. Ben Carson.

Biden nominated Fudge in December. Then, in February, the Senate Banking Committee voted to approve Fudge’s nomination, before it was confirmed by the full Senate.

According to the Associated Press, Fudge said at her confirmation hearing in January that her first priority would be protecting the millions of people who have fallen behind on rent or mortgages due to loss of income during the pandemic, telling senators that "we cannot afford to allow people in the midst of a pandemic to be put in the streets."

Merrick Garland, President Joe Biden's attorney general nominee, vowed Monday to prioritize combating extremist violence with an initial focus on the insurrection at the U.S. Capitol as he sought to assure lawmakers that the Justice Department would remain politically independent on his watch.

Prior to entering Congress, the longtime Ohio lawmaker served as the mayor of Warrensville Heights in Ohio from 2000 to 2008. Her congressional career began when she replaced the late Democratic Rep. Stephanie Tubbs Jones following her sudden death in 2008.

This news comes as Congress is expected to pass new benefits for renters and homeowners who have suffered economic losses amid the coronavirus pandemic, the Associated Press reported.

Meanwhile, the Senate is also expected to confirm other nominees this week, including Judge Merrick Garland as Attorney General.FOX News and the Associated Press contributed to this report.

FOX News contributed to this report. This story was written from Los Angeles.