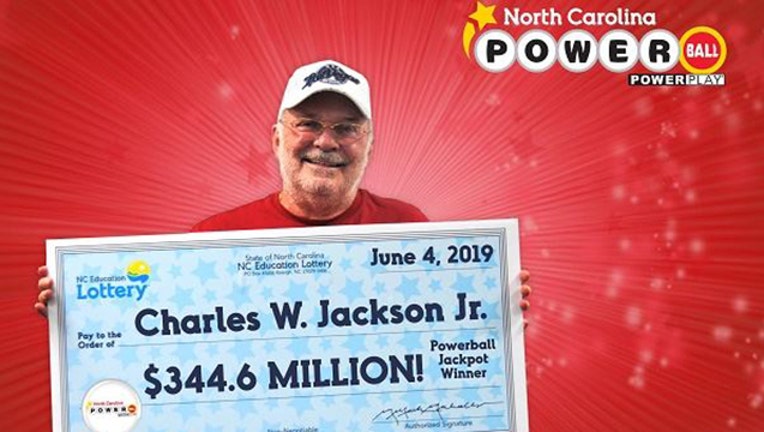 RALEIGH, N.C. - A North Carolina man who says he based his Powerball entry on a fortune cookie he got from his granddaughter now has a fortune to celebrate.

Jackson chose the $223 million lump sum payment and said he would donate some of it to several charities and give $1 million to his brother to make good on a deal they made.

Jackson told the North Carolina lottery that he had played the same fortune cookie numbers for two years in both the Powerball and Mega Millions - twice a week. Last Friday, his numbers hit.

Jackson initially thought he had won just $50,000 and was heading to Raleigh to collect, but looked again and saw he'd won a lot more.

He also said he had to find the jackpot amount on Google because he doesn't watch television news. Once he did, he told his wife, "You ain't going to believe this - I got it all."

Jackson said he hopes the windfall doesn't change him.

He added, "I'm still going to wear my jeans - maybe newer ones."

Jackson got his big check Tuesday in North Carolina and, since he's taking the $223 million lump sum, takes home $158 million after taxes.

As for the charities, he's planning to give to some very worth causes.

"I’m going to pay it forward and donate to St. Jude Hospital, the Wounded Warriors Project, and the Shriners. I always said I would if I ever won the lottery. So I’m going to make due on that promise," Jackson said.

This story was reported from Southfield, Mich.