Swans are a fixture in Orlando’s Lake Eola Park. Orlando Police say Richard Harger Sr. was caught on camera grabbing two young swans, or cygnets, from their nest in the park.

ORLANDO, Fla. - Swans are a fixture in Orlando’s Lake Eola Park. Orlando Police say Richard Harger Sr. was caught on camera grabbing two young swans, or cygnets, from their nest in the park.

FOX 35 News talked with Harger who says he never meant them any harm.

FOX 35 News stopped by Harger's east Orlando home Wednesday morning. Hanging from his gate are the words "4 Da' Birds." In his driveway was the red jeep that police describe as his getaway car after seizing the cygnets and putting them in a cooler.

"I could see where his motivation was, especially with is close to the road, and he may have had the feeling that he was doing the right thing," Rempe said, "but there's a right way to do things as well. Judging by the video, he knew he wasn't doing anything the right way." 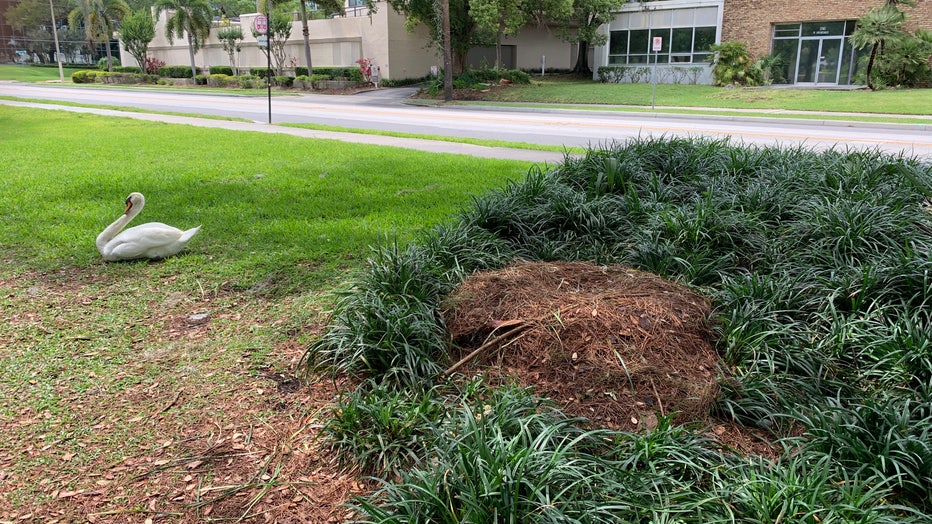 Harger wouldn't speak on camera and didn't want to say much. Again, he said he didn't mean the cygnets any harm and also that he's working to get a lawyer.

Rempe says birds have large clutches of eggs because many animals prey on them and few ever make it to adulthood.

"So you can look at an animal that would have between four to eight babies – there's a moderate chance that two of them will reach a potential breeding age," Rempe said, adding that the circle of life should be respected. "It's for one reason or another. Every animal has to eat in a natural setting. Nothing goes to waste. We have to entertain the fact that the ducks are here to feed the alligators, the owls need to eat too."

Rempe also thinks that if park officials reunite the cygnets with their parents, they'll likely be welcomed back.

"They're very protective. They're very guarded," he said. "They'll guard not just the babies, but the entire flock they operate with. They're very social animals in that aspect so you could definitely put the babies back with the mother without causing any issues."

City of Orlando officials say the cygnets are in a secure location and they'll be getting a thorough check-up.