Speaking after the government issued the jobs report, President Joe Biden said it showed that his $1.9 trillion financial rescue package — which included $1,400 checks to most adults — was already boosting the economy.

LinkedIn will be adding "stay-at-home mom," "stay-at-home dad" and "stay-at-home parent" as official job titles on its website, according to a statement obtained by FOX Television Stations.

Whether it was stepping away from a job pre-pandemic to help raise a family, or being laid off recently due to COVID-19’s crippling economic effects, users felt they needed a more accurate way to describe career gaps.

Citing the U.S. Bureau of Labor Statistics, Linkedin said more than 2.5 million women left the workforce during the COVID-19 pandemic, many voluntarily, due to a sudden lack of childcare or to manage virtual learning for their children. 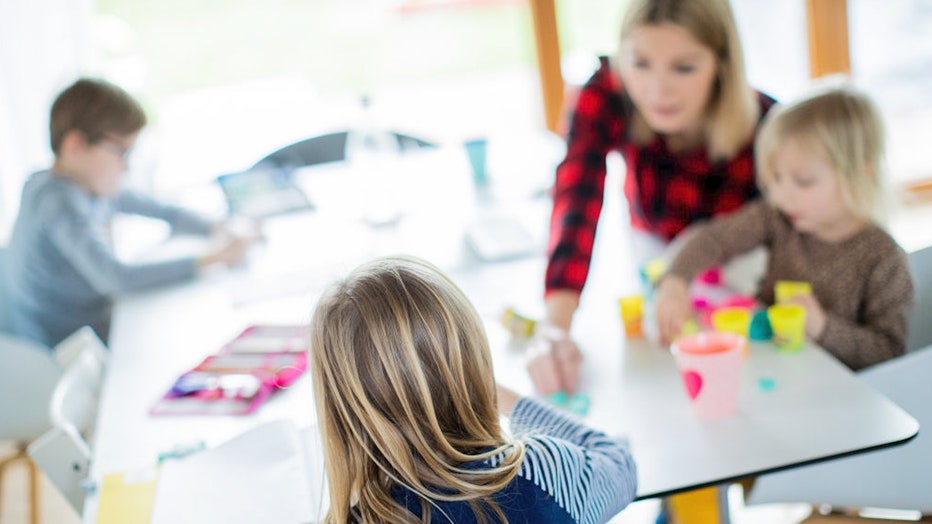 FILE - A mother sits in her living room helping her children with their schoolwork.

RELATED: Unemployment claims jump to 744,000 as layoffs persist amid pandemic

"We’ve heard from our members, particularly women and mothers who have temporarily stopped working, that they need more ways to reflect career gaps on their profile due to parenting and other life responsibilities," the company said.

LinkedIn hopes adding these new, official job titles will help users be more confident explaining career gaps when applying for their next job.

Additionally, LinkedIn users will be able to select the "self-employed" feature without having to specify the company or employer in the coming weeks.

The company also plans to add a new field specifically catered to explaining temporary leaves from work such as "‘parental leave,’ ‘family care,’ or ‘sabbatical,’ so that people can address any gaps in their career journey."

"The stigma of employment gaps is already starting to fade. While 72% of job seekers believe there’s a stigma associated with having a career gap, 79% of hiring managers today would hire a candidate with a career gap on their resume," according to LinkedIn.

In the round of updates, LinkedIn will also allow for a more customized profile page for its users by adding a "cover story" feature, as well as allowing users to pick their own pronouns. LinkedIn says this will create an environment "where everyone can express themselves and their career journey in the ways they most want so that they can find opportunities that most allow them to be who they are at work."

The COVID-19 pandemic has wreaked havoc on the American economy, with millions losing their jobs and having to apply for unemployment benefits just to tread water.

And despite optimism rising amid mass vaccination efforts and reopenings throughout the country, unemployment continues to stay stubbornly high.

The number of Americans applying for unemployment benefits rose at the beginning of April to 744,000, signaling that many employers are still cutting jobs even as more people are vaccinated against COVID-19, consumers gain confidence and the government distributes aid throughout the economy.

Jobless claims have declined sharply since the virus slammed into the economy in March of last year. But they remain stubbornly high by historical standards: Before the pandemic erupted, weekly applications typically remained below 220,000 a week.

For the week ending March 27, more than 3.7 million people were receiving traditional state unemployment benefits, the government said. If you include supplemental federal programs that were established last year to help the unemployed endure the health crisis, a total of 18.2 million are receiving some form of jobless aid the week of March 20.

Economists monitor weekly jobless claims for early signs of where the job market is headed. Applications are usually a proxy for layoffs: They typically decline as the economy improves. Or they rise as employers retrench in response to sluggish consumer demand.

By nearly all measures, though, the economy has been strengthening. During March, employers added 916,000 jobs, the most since August, and the unemployment rate declined from 6.2% to 6%. In February, the pace of job openings reached its highest level on record. Last month, consumer confidence posted its highest reading in a year.

And this week, the International Monetary Fund forecast that the U.S. economy will grow 6.4% this year. That would be the fastest annual pace since 1984 and the strongest among the world’s wealthiest countries.