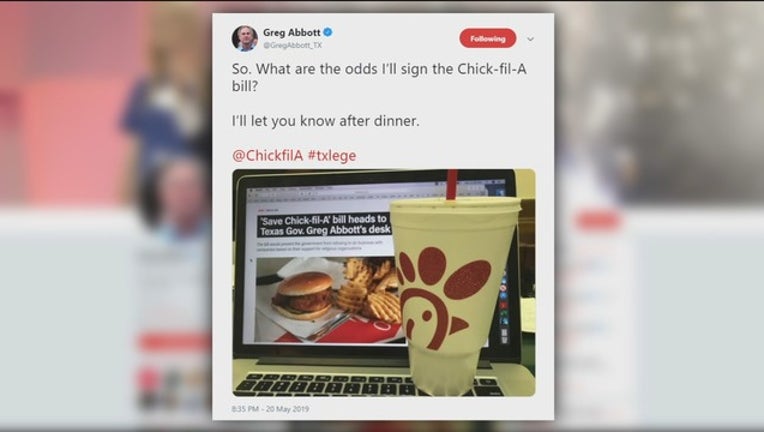 Republicans in the Texas House passed what they call a religious freedom bill. Critics call it a hateful piece of legislation.

The bill has been nicknamed the "Save Chick-fil-A Bill." It was introduced after the city of San Antonio refused to allow one of the restaurants in its airport. The city cited the company’s support for anti-gay and lesbian organizations.

It’s expected to go to the governor soon and become a law. It bans cities and counties from discriminating against individuals or organizations based on their religious convictions.

The passage in the Texas House came after long and sometimes emotional debate.

“Members, this bill is here being debated on the floor today to make LGBTQ Texans feel less than, to make us feel attacked by our own government,” said State Rep. Erin Zwiener, a Democrat from Driftwood.

“I think it’s actually a non-discrimination bill... making sure the government does not discriminate against you on the basis of who you’re associated with, who you’re affiliated with,” said State Rep. Matt Krause, a Republican from Fort Worth.

The Senate version of the bill allowed the Texas attorney general to sue over violations of the law. The House version only allows private parties to file suit.

If the Senate goes along with that, the bill will go to Gov. Greg Abbott’s desk to sign it into law.

Abbot left little doubt about his feelings on the legislation. He posted a message on Twitter asking, “What are the odds I’ll sign the Chick-fil-A bill? I’ll let you know after dinner.”

The post included a picture of a Chick-fil-A meal.