FOX 35 meteorologist Jayme King is taking a look at the forecast for Saturday's manned launch.

ORLANDO, Fla. - SpaceX will try again on Saturday to launch its Crew Dragon spacecraft with astronauts aboard after Wednesday's attempt was scrubbed due to weather.

The forecast for Saturday isn't looking much better though.

If the launch is scrubbed once again, the next backup date is on Sunday, which the Weather Squadron also says there is a 40-percent chance of favorable weather.

"The primary concerns are flight through precipitation, as well as the anvil and cumulus cloud rules."

NASA astronauts Doug Hurley and Bob Behnken were set to blast off on Wednesday for the International Space Station, ushering in a new era in commercial spaceflight and putting NASA back in the business of launching astronauts from U.S. soil for the first time in nearly a decade.

With just 16 minutes left on the countdown clock, the launch was called off due to unfavorable weather conditions. 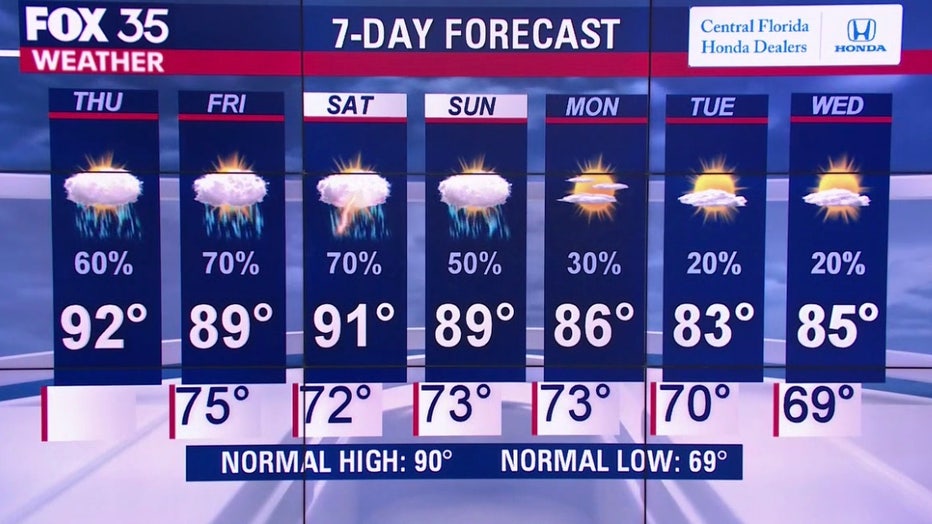 "No launch for today -- safety for our crew members @Astro--Doug and @AstroBehnken is our top priority," NASA Administrator Jim Bridenstine tweeted, using a lightning emoji.

“We had just simply too much electricity in the atmosphere," Bridenstine said Wednesday. "There wasn’t really a lighting storm or anything like that, but there was a concern if we did launch it could actually trigger lightning.”

FOX 35 News will be bringing you LIVE coverage on Saturday of the launch.