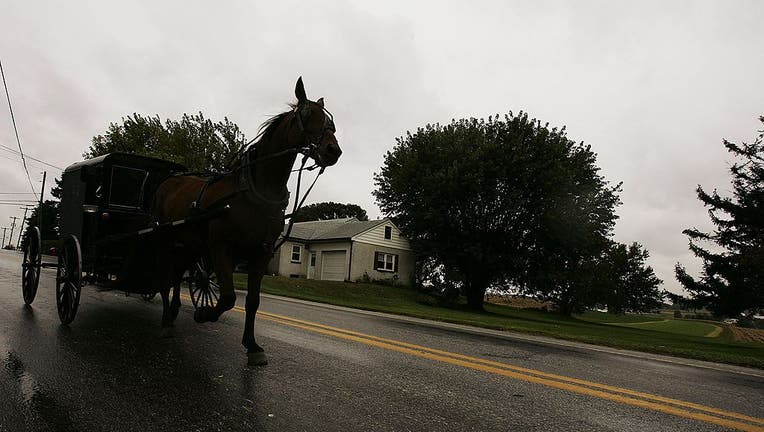 Four Amish children are dead and one is missing after a horse-drawn buggy overturned and was swept away in floodwaters in Kentucky on Wednesday, according to officials.

The Kentucky State Police said that an Amish family with one adult and children were attempting to cross a low-water bridge around 4:45 p.m. in Bath County in the town of Owingsville, about 50 miles east of Lexington.

According to state police, the horse and buggy were then swept away by the strong current.

Bath County Judge-Executive Bobby Rogers said in a post on Facebook that "it has been a very tragic and mournful day within Bath County," as the county also recorded its first death from coronavirus.

"Tragically, we have also had five Amish children swept away by floodwaters this evening after the heavy rain we’ve experienced today," he wrote. "I ask that you please remember these individuals, and their families in your prayers this evening, and the days ahead."

The adult inside the buggy was able to make it to a nearby bank on the stream, police said. Four of the children were found and pronounced dead at the scene by the Bath County Coroner.

Authorities are still searching for the fifth child. Rogers said on Facebook that 50 members of the National Guard were assisting with the search.

"Having spent the evening helping search and doing what I can, I’m very appreciative of all those who have responded to this search and rescue effort," he wrote.

Missi Mosley, who lives nearby, told WKYT-TV she rushed to the scene with her boyfriend on their ATV after hearing the call go out on the scanner. The couple found the horse and were able to pull it out, but that was all they could see in the muddy waters.

"It was devastating," Mosley told WKYT-TV. "The waters are so swift, and the rain was pouring down. It was just a somber feeling."

Rescue crews still were working along the banks of the creek next to a washed-out road, FOX56 reported.