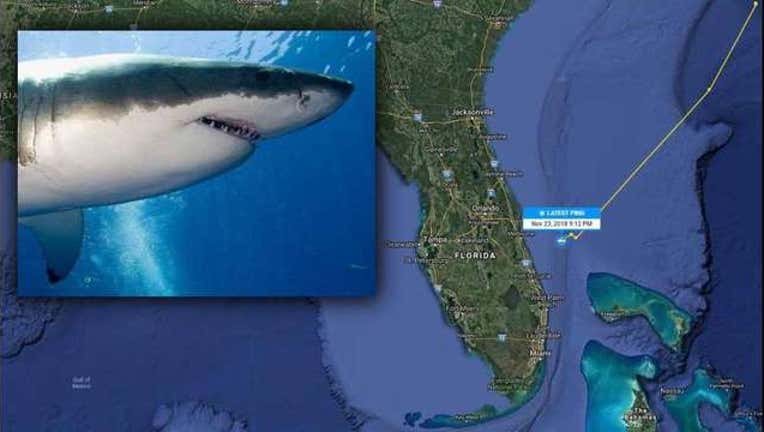 According to Ocearch, the 14-foot, 2,300-pound shark has been tracked swimming off the coast of Melbourne on Black Friday.

"It's the same area she spent the winter in last year," Ocearch Tweeted.

Katharine was tracked near the Florida-Georgia border in 2016 when scientists believed she may have been pregnant.

She was captured in 2013 by researchers who attached a transmitter to her dorsal fin and she's been tracked ever since. In 2014, she became Ocearch's first Atlantic great white shark to migrate past the Florida Keys and into the Gulf of Mexico.

In addition to Katharine, another, much smaller, great white shark named "Manhattan" is currently pinging off the Florida coast, along with several tiger and bull sharks being tracked by Ocearch.

Earlier this year, a female great white shark named Savannah pinged off the west coast of Florida in the Gulf of Mexico, along with Miss Costa, another great white who was swimming up and down the Gulf coast.

Ocearch researchers have tagged more than 330 animals including sharks, whales, and alligators, in an effort to collect previously unattainable data in the ocean and the wild. "Our mission is to accelerate the ocean's return to balance and abundance," according to the organization's website.