Saturdays events in Troy and Selma marked the first of 6 days of commemorative services for Rep. Lewis.

ATLANTA - The funeral for the late civil rights icon and congressman John Lewis will be held Thursday at Atlanta’s historic Ebenezer Baptist Church, which the Rev. Martin Luther King Jr. once led.

Lewis’ family announced that the funeral will be private, but the public is invited to pay tribute over the coming days during a series of celebrations of Lewis’ life beginning Saturday in his hometown of Troy, Alabama. On Sunday morning, a processional will be held in which Lewis’ body will once more cross the Edmund Pettus Bridge, where he and other voting rights demonstrators were beaten 55 years ago on “Bloody Sunday.”

Friends of John Lewis said the civil rights pioneer always remained determined and courageous, even in his last days.

Rep. John Lewis to lie in state at the Capitol

House Speaker Nancy Pelosi and Senate Majority Leader Mitch McConnell announced Thursday that the public will be allowed to pay their respects in Washington to the longtime Georgia congressman Monday night and all day Tuesday.

Due to coronavirus precautions, Lewis will lie in state for public viewing at the top of the east front steps of the Capitol rather than in the Rotunda, and the public will file past on the East Plaza. Face masks will be required and social distancing will be enforced.

John Lewis: ‘Good troublemaker’ and tireless activist — a look at the life of the civil rights icon

Lewis’ family has asked members of the public not to travel from across the country to pay their respects. Instead, they suggested people pay virtual tribute online using the hashtags #BelovedCommunity or #HumanDignity. 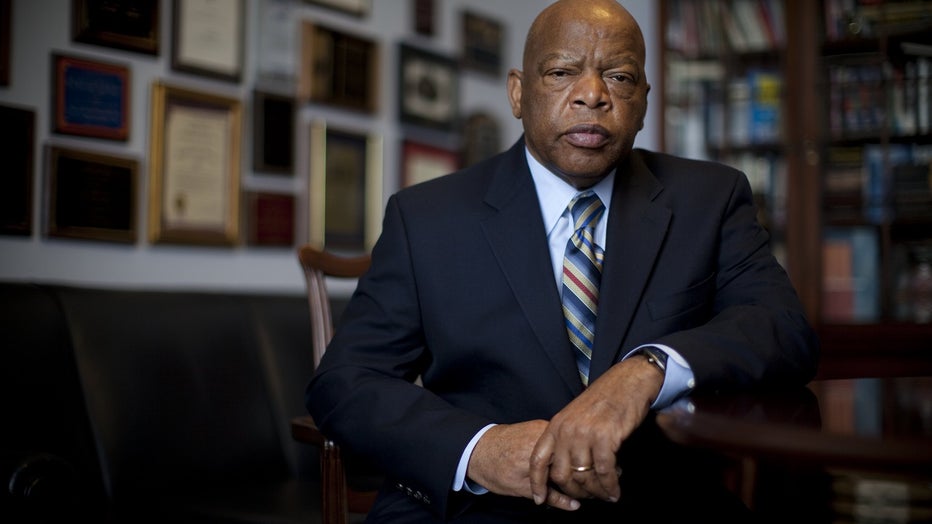 WASHINGTON D.C. - MARCH 17: Congressman John Lewis (D-GA) is photographed in his offices in the Canon House office building on March 17, 2009 in Washington, D.C. The former Big Six leader of the civil rights movement was the architect and keynote spe

Lewis, 80, died last Friday, several months after he was diagnosed with advanced pancreatic cancer. He served 17 terms in the U.S. House. Following the funeral at the Ebenezer Baptist Church Horizon Sanctuary, he will be interred at South View Cemetery in Atlanta.