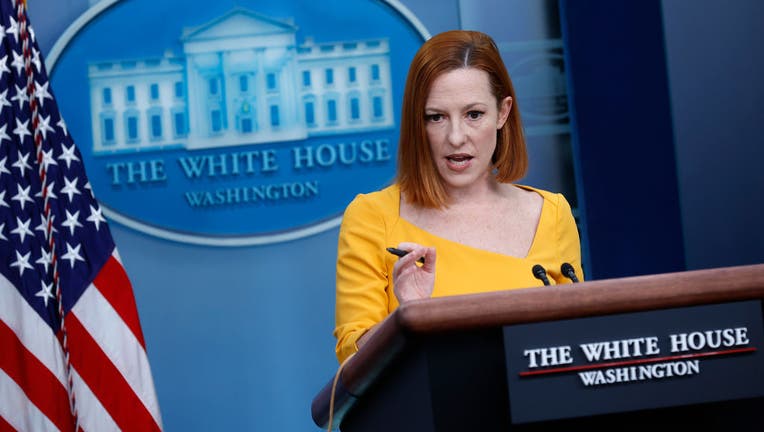 WASHINGTON - White House press secretary Jen Psaki announced she tested positive for COVID-19 while preparing to assist President Joe Biden on his upcoming NATO trip to Europe. This is the second time she tested for the virus after receiving her first positive test in October 2021.

"Today, in preparation for travel to Europe, I took a PCR test this morning," she tweeted Tuesday. "That test came back positive, which means I will be adhering to CDC guidance and no longer be traveling on the President’s trip to Europe."

Psaki added that she had two socially-distant meetings with Biden Monday and he is not considered a close contact based on the guidelines from the U.S. Centers for Disease Control and Prevention.

She said that Biden has tested negative for the virus.

Psaki further explained that she is vaccinated but has mild symptoms. She said will work from home in accordance with the White House COVID-19 guidelines and will return to the office following a five-day isolation period and a negative test.

Biden is heading to Europe this week for urgent talks with NATO and European allies, as Russian forces concentrate their fire upon cities and trapped civilians in a nearly month-old invasion of Ukraine.

Biden will first travel to Brussels and then to Poland to meet with leaders there,  Psaki said in a statement Sunday night.

White House officials have said Biden has no plans to travel to Ukraine. Secretary of State Antony Blinken, while in Poland this month, briefly crossed into neighboring Ukraine in a show of solidarity alongside that country’s foreign minister, Dmytro Kuleba. Poland has been one of the most vocal countries in asking fellow NATO members to consider getting more involved to rein in the bloodshed.

Russian President Vladimir Putin’s invasion of Ukraine largely has united the U.S. and NATO and European allies, as well as allies in Asia and elsewhere. The United States and European governments see Moscow’s military aggression as a threat to their security and strategic interests.

Biden and NATO have said repeatedly that while the U.S. and NATO will provide weapons and other defensive support to non-NATO member Ukraine, they are determined to avoid any escalation on behalf of Kyiv that risks a broader war with Russia.

Ukraine’s president, Volodymyr Zelenskyy, has pleaded for the U.S. to provide his military with more aircraft and advanced air-defense systems. NATO and the United States have rejected his appeals to establish a "no-fly zone" over Ukraine to suppress Russian air power, saying it would put Western forces in direct conflict with Russian ones.

Biden’s trip includes a summit Thursday of NATO leaders, who will use the meeting to look at strengthening the bloc’s own deterrence and defense, immediately and in the long term, to deal with the now openly confrontational Putin.

His agenda includes a meeting of leaders of the Group of Seven countries to discuss the punishing financial and economic penalties that the West and its allies have leveled on Russia over its invasion, Psaki said.

COVID-19 cases continue to decline in US, rising in Europe and Asia

According to CDC data, COVID-19 cases, hospitalizations and deaths all continue to trend downward after a winter surge fueled by the omicron variant.

The 7-day moving average for cases hovers around 27,000. That's down from when the number hovered around 809,000 in mid-January.

Fully vaccinated and boosted people have a high degree of protection against serious illness and death from COVID-19, particularly the most common and highly transmissible Omicron variant.

Though COVID-19 cases have fallen markedly since the winter's surge, a coronavirus resurgence in Asia and Europe sparked by the BA.2 sub-variant has raised questions about America's pandemic future.

Scientists have warned about the possibility of new variants throwing a wrench in plans to return to "normal," although face mask and vaccine restrictions and regulations have already been lifted nationwide.

"In terms of early studies, we have not seen any studies that suggest it’s more severe, nor have we seen studies that suggests that it will evade our vaccines any more so than omicron has already – and, in fact, that our vaccines will work just like it has with omicron," CDC Director Dr. Rochelle Walensky said at a February White House COVID-19 response team briefing.

The Associated Press and FOX News contributed to this story. This story was reported from Los Angeles.