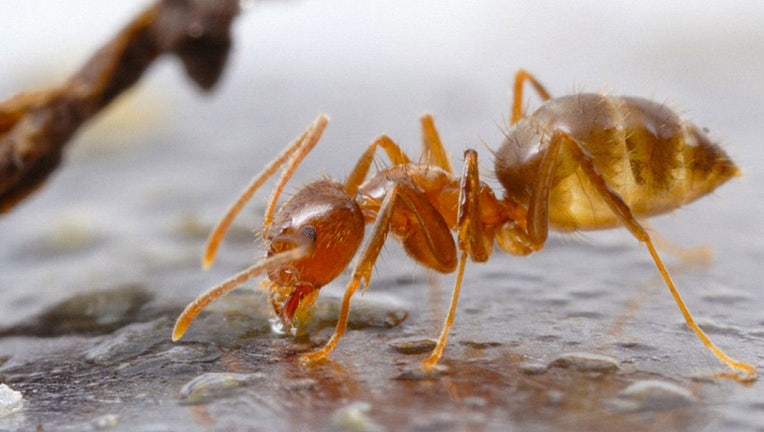 Close-up image of a tawny crazy ant. (Christine Sinatra via The University of Texas at Austin)

Scientists believe an invasive ant species that spews acid from its abdomen has finally met its match after discovering that a naturally occurring fungus kills off a significant number of the ant species’ population.

The tawny crazy ant species has been wreaking havoc on the southeastern United States for the last 20 years, according to study authors from The University of Texas at Austin.

Native to South America, the tawny crazy ant first made its appearance in the U.S. in Florida in the early 1990s, according to Edward LeBrun, a research scientist with the Texas Invasive Species Research Program at Brackenridge Field Laboratory and lead author of the study.

"Crazy ants, like all ants in this group, produce formic acid as venom and use it as a weapon when fighting other ants," the website continued.

The crazy ant's venom is so strong it can actually coat itself in its own venom as a form of protection from other ant species such as the fire ant. While they are capable of biting humans, they are not poisonous, LeBrun told FOX TV Stations.

Since the early 2000s, the species has spread and made its home in residents’ breaker boxes, AC units, sewage pumps and other electrical devices, causing shorts and other damage, according to a news release about the study.

About eight years ago, scientists were studying the crazy tawny ants in Florida when they discovered a few had swollen abdomens. These ants were taken to be observed and scientists found that they were filled with fat, according to the news release.

Upon further investigation, it was discovered that the ants had "spores from a microsporidian, a group of fungal pathogens—a species new to science. Microsporidian pathogens commonly hijack an insect's fat cells and turn them into spore factories," the news release continued.

Researchers still don’t know where this fungus came from but guess that it may have come from the ants’ native country or maybe it contracted it from another insect.

"I think it has a lot of potential for the protection of sensitive habitats with endangered species or areas of high conservation value," said LeBrun.

A total of 15 ant populations were observed over the last eight years, the news release continued, and researchers found that every colony that had the fungus saw a decline in population. Sixty-two percent of these colonies disappeared entirely.

"You don't expect a pathogen to lead to the extinction of a population," LeBrun said. "An infected population normally goes through boom-and-bust cycles as the frequency of infection waxes and wanes." 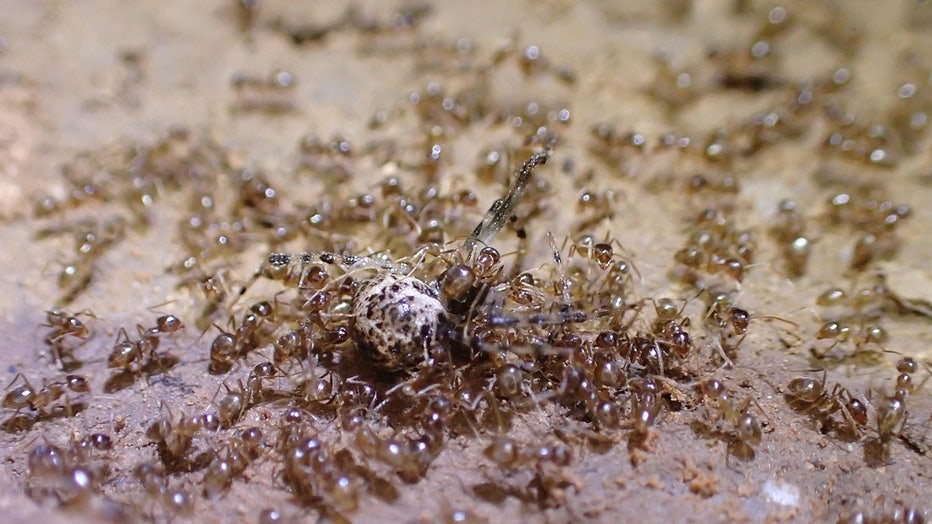 For reasons unknown, scientists found that the fungus does not harm native ant species or other arthropods, according to LeBrun.

In 2016, LeBrun and his research team received a call from Estero Llano Grande State Park in Weslaco, Texas, asking for help getting the crazy ant species population under control.

Park officials told LeBrun they were losing native species such as scorpions, lizards, snakes, and even some birds.

"Baby rabbits were being blinded in their nests by swarms of acid-spewing ants," a news release on the study stated.

"They had a crazy ant infestation, and it was apocalyptic, rivers of ants going up and down every tree," LeBrun said. "I wasn't really ready to start this as an experimental process, but it's like, OK, let's just give it a go."

Researchers used ants that were already infected with the fungus and inserted them into the invading colonies in the park and within two years, the population declined.

"Now, they are nonexistent and native species are returning to the area. The researchers have since eradicated a second crazy ant population at another site in the area of Convict Hill in Austin," the news release continued.

"This doesn't mean crazy ants will disappear," LeBrun said. "It's impossible to predict how long it will take for the lightning bolt to strike and the pathogen to infect any one crazy ant population. But it's a big relief because it means these populations appear to have a lifespan."