However, the true death toll is believed to be far higher.

Local media have reported discrepancies between official state tallies of the dead and actual numbers of bodies in crematoriums and burial grounds. Many crematoriums have spilled over into parking lots and other empty spaces as blazing funeral pyres light up the night sky.

Burial grounds are also filling up fast. The capital's largest Muslim graveyard is running out of space, said Mohammad Shameem, the head gravedigger, noting he was now burying nearly 40 bodies a day.

In southern Telangana state too, doctors and activists are contesting the official death counts.

On April 23, the state said 33 people had died of COVID-19. But between 80 to 100 people died in just two hospitals in the state’s capital, Hyderabad, the day before. It is unclear whether all were due to the virus, but experts say COVID-19 deaths across India aren’t being listed as such.

Instead, many are attributed to underlying conditions despite national guidelines asking states to record all suspected COVID-19 deaths, even if the patient wasn't tested for the virus. 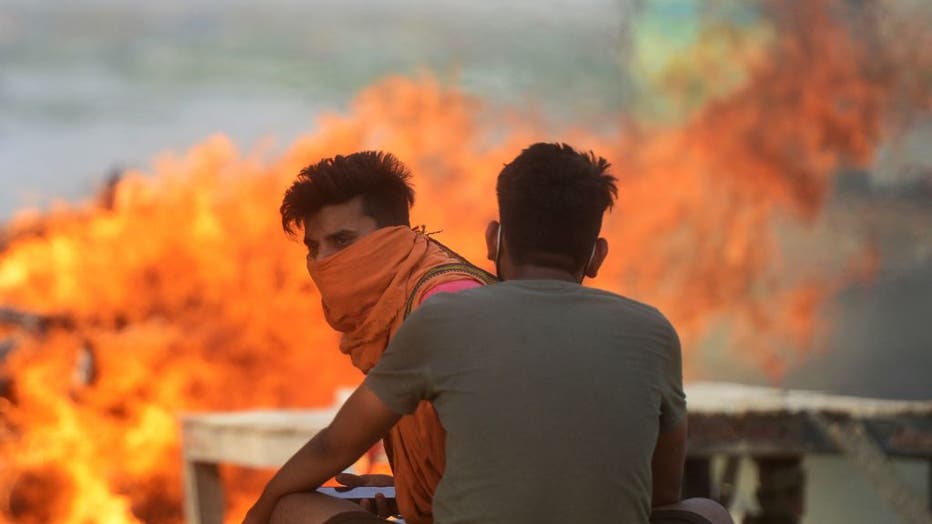 Family members sit next to a burning pyre at a cremation ground amid the COVID-19 pandemic in Allahabad on April 28, 2021. (Photo by SANJAY KANOJIA/AFP via Getty Images)

For instance, New Delhi officially recorded 4,000 COVID-19 deaths by Aug. 31, but this didn't include suspected deaths, according to data accessed by The Associated Press under a right-to-information request. Fatalities have since more than tripled to over 14,500. Officials didn't respond to queries on whether suspected deaths are now being included.

In Lucknow, officials said 39 people died of the virus in the city on Tuesday. But Suresh Chandra, who operates its Bhaisakhund electric crematorium, said his team had cremated 58 COVID-19 bodies by Tuesday evening, and 28 more were cremated at a nearby crematorium the same day.

Ajay Dwivedi, a government official in Lucknow, acknowledged more bodies were being cremated but said they included corpses from other districts.

India's daily deaths have nearly tripled in the past three weeks.  The country had thought the worst was over when cases ebbed in September, but infections began increasing in February.

In March, Health Minister Harsh Vardhan declared India was nearing the "endgame." When daily cases were in the hundreds of thousands, Modi's Bharatiya Janata Party and other political parties were holding massive election rallies, drawing thousands of maskless supporters.

The government also allowed a Hindu festival drawing hundreds of thousands to the banks of the Ganges River to proceed despite warnings from experts that a devastating surge was starting. Many were already convinced COVID-19 wasn't very lethal since the death toll seemed low.

India reported 362,757 new confirmed cases on Wednesday, a global record. The figure pushed the country's COVID-19 case total past 17.9 million, second only to the U.S.

India’s reported death toll is behind that of Mexico, Brazil and the U.S., according to Johns Hopkins data.

RELATED: CDC: Fully vaccinated Americans can do some outdoor activities without mask

"Just as India sent assistance to the United States as our hospitals were strained early in the pandemic, we are determined to help India in its time of need," the president tweeted on Sunday.

Earlier this week, the head of the World Health Organization called the surge in COVID-19 cases in India "beyond heartbreaking" and said the U.N. agency also sent critical supplies to the country, including thousands of portable oxygen machines.

At a press briefing, WHO director-general Tedros Adhanom Ghebreyesus said the pandemic "continues to intensify" globally and that coronavirus infections have now risen for the ninth straight week, while deaths have increased for the sixth week in a row.

"There were as many cases globally last week as in the first five months of the pandemic," he said.

The Associated Press contributed to this story. It was reported from Cincinnati.