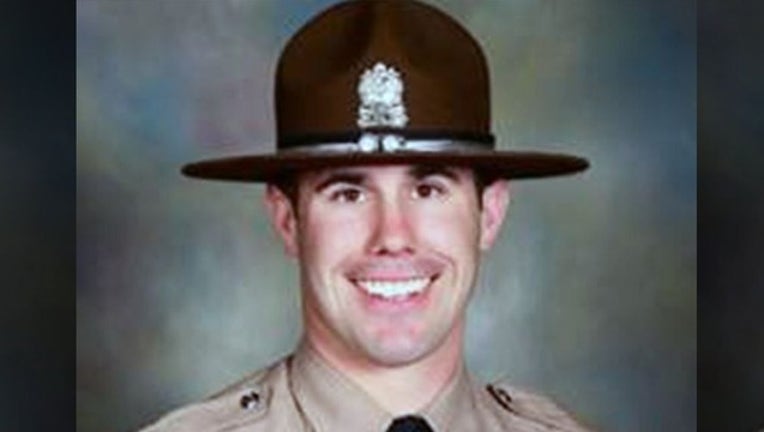 Illinois State Police SWAT team member Nicholas Hopkins, 33, was shot at around 5:30 a.m. during an exchange of gunfire while he and other troopers were serving the warrant at a home in East St. Louis.

After the shooting, police surrounded the home and arrested three people. Police remained on the scene throughout the day, uncertain if another suspect was barricaded in the house, according to authorities. The three people arrested were not identified and authorities have not revealed the basis for the search warrant.

In a statement following the shooting, Illinois Gov. J.B. Pritzker noted state troopers display unbelievable courage and "put their lives on the line for us every single day."

"Please keep them in your thoughts and prayers during this dangerous, active situation in East St. Louis and every day," he said.

"On behalf of the governor and the people of Illinois, my heartfelt thanks goes out to all law enforcement agencies, emergency personnel, first responders and medical personnel for their assistance in this difficult time," Kelly said. "In particular I give my thanks to the troopers who performed CPR for an extended period on their fellow trooper to sustain their brother's life so that his family could see him one last time."

Hopkins leaves behind a wife and three children. He also has three sisters and two brothers, one of whom serves as a police officer in another department in the state, Kelly noted.

"It is nearly impossible to express the depth of my sadness and my condolences to the entire Hopkins family, his friends and the Illinois State Police family," he said.

Hopkins was a 10-year veteran of the force and grew up in Waterloo, where he patrolled and where his father currently serves as an alderman.

Hopkins is the fourth Illinois State Trooper to be killed this year, and his passing marks the first death of an Illinois State Police SWAT team member in nearly 20 years, Kelly said.

U.S. attorney for the Southern District of Illinois Steve Weinhoeft says the area where the shooting took place is "particularly dangerous."

"He (Hopkins) was trying to make that community safer for every man, woman and child," Weinhoeft said.

"He is another great hero of Illinois that has paid the ultimate price while protecting and serving the citizens of this state," the acting director said. "This is a particularly bitter moment for me because it occurred in the home part of my state. It is hard, especially hard, for the entire state police."

Kelly said Hopkins was a "bright light" in the world and will continue to be one even after his passing.

"Even now, he continues to serve others. He will donate his organs and his very body to help others," he said. "He would want us all to know he was as healthy as a horse, and that a healthy body like his can help save or improve the lives of as many as 40 people through organ donation."

"Even in death, even in this dark moment, his light is shining," Kelly added.

"He always had a smile, he loved it, his dad said Nick was so happy when he made the tactical response team and he just loved it, so he's happy to be a trooper," Smith said.

"Nick's father said Nick had amazingly strong hands and was an incredible carpenter," Kelly said. "So please right now, please join me in a moment of prayer or silence to pray for his family and the soul of Trooper Hopkins as he passes into the hands of the greatest carpenter."