NEW ORLEANS - The first lights came back on in New Orleans on Wednesday, serving as a glimmer of hope after Hurricane Ida knocked out electricity for the entire city and left behind flooding, destruction and water shortages.

Power company Entergy announced its crews had turned "power on for some customers in Eastern New Orleans," the first power to have been restored since Ida slammed the electric grid on Sunday with its 150 mph winds. The storm left more than 1 million homes and businesses across Louisiana and Mississippi without electricity.

Entergy didn't immediately say how many homes and businesses had electricity restored. The company said it was looking to first restore power to "critical infrastructure" such as hospitals, nursing homes and first responders.

More than 25,000 utility workers were working to restore power, but officials said it could take weeks.

"While initial service can be provided to some customers, the full restoration will still take time given the significant damage across the region," Entergy said in a statement.

Hundreds of thousands of people remained without power and faced water shortages as New Orleans and the rest of the region were under a heat advisory. Forecasters said the combination of high temperatures and humidity could make it feel like 106 degrees Fahrenheit on Wednesday.

Twelve people, including seven children, were hospitalized for carbon monoxide poisoning related to a portable generator, according to New Orleans emergency officials. The incident was reported at a home in the Gert Town neighborhood of New Orleans. 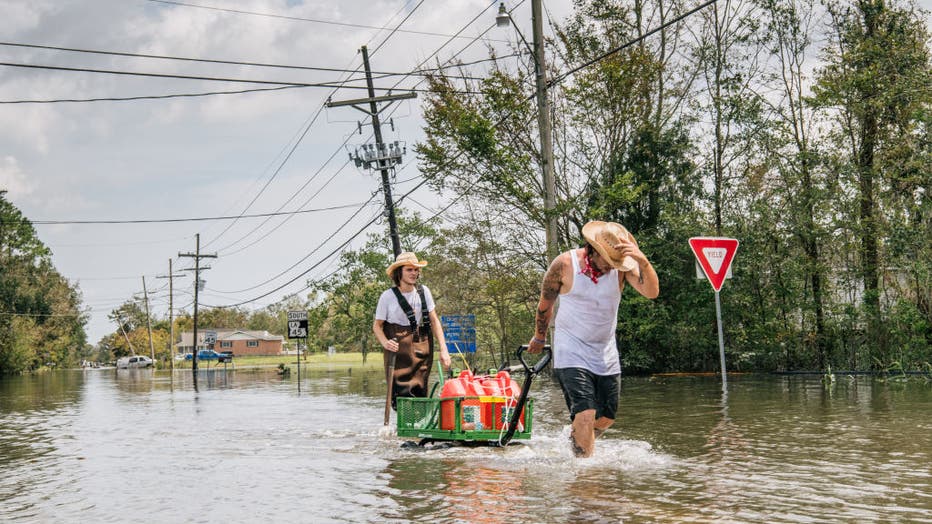 Electricity was restored Wednesday for some customers in Eastern New Orleans after Ida, while hundreds of thousands still remain with power and water shortages.

New Orleans officials announced seven places around the city where people could get a meal and sit in air conditioning. The city was also using 70 transit buses as cooling sites and will have drive-thru food, water and ice distribution locations set up, Mayor LaToya Cantrell said. Louisiana Gov. John Bel Edwards said state officials also were working to set up distribution locations in other areas around the state.

"We know it’s hot. We know we do not have any power, and that continues to be a priority," Cantrell said during a news conference.

Cantrell ordered a nighttime curfew Tuesday, calling it an effort to prevent crime amid the entire city in the dark. Police Chief Shaun Ferguson said there had been some arrests for stealing.

The New Orleans airport, closed since the storm hit, planned to reopen Wednesday for "very limited" flights, an airport statement said. Only American Airlines had flights scheduled Wednesday, but officials "hope for more normal operations later in the week," it said.

The governor on Tuesday surveyed damage from the storm, which caused massive flooding and structural damage in Houma, LaPlace and other communities outside New Orleans. Ida was the fifth most powerful storm to strike the U.S. when it hit Louisiana.

President Joe Biden is scheduled to visit New Orleans on Friday to survey the damage and meet with local and state leaders.

Hurricane Ida made landfall in Louisiana on August 29 as a category 4 storm, with maximum sustained winds of 150 mph, the National Hurricane Center reported.(Credit: Paulette Ristine via Storyful)

The barrier island of Grand Isle, which bore Ida's full fury, is "uninhabitable," with every building damaged, Jefferson Parish President Cynthia Lee Sheng told a news conference. There are also numerous breaks in the levee system and a strong odor of natural gas, she said.

The number of deaths from the hurricane climbed to at least four in Louisiana and Mississippi, including two people killed Monday night when seven vehicles plunged into a 20-foot-deep hole near Lucedale, Mississippi, where a highway had collapsed after torrential rains.

Edwards said he expects the death toll to rise.

RELATED: How to help victims of Hurricane Ida