President Joe Biden promised all the assistance that's needed in responding to the aftermath of Hurricane Ida and a massive wildfire in California on Sept. 2, 2021, in remarks from the White House.

Hurricane Ida ripped through the Gulf Coast on the 16th Anniversary of Hurricane Katrina.

Both storms left death and destruction behind, and while we can’t see it from Ida just yet, the lingering impacts from Ida are expected to be felt for years to come, just like Katrina.

But exactly how bad was Ida compared to Katrina?

While the estimated damage and far-reaching impacts of Ida are still being determined, here are some comparisons between two of some of the strongest storms to hit the South in United States history. 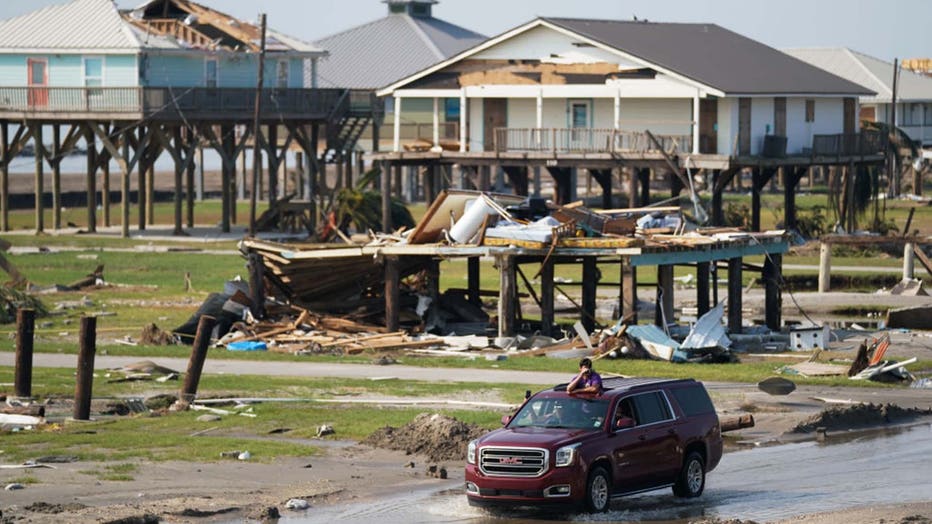 According to preliminary models, Ida is estimated to have caused nearly $18 billion in damages.

Based on high-resolution reference models from Karen Clark & Co., the company estimates that the insured loss from Hurricane Ida will be close to $18 billion, with $40 million in the Caribbean and the rest from wind and storm surge losses in the US.

According to a report by KCC, the estimate includes the privately insured damage to residential, commercial and industrial properties and automobiles. It does not include boats or offshore properties.

Katrina stands to remain the costliest U.S hurricane, with estimated damages over $81 billion and costs over $160 billion, according to the U.S. Government Accountability Office.

Katrina weakened quite a bit before landfall, striking Louisiana as a Category 3 storm with 127 mph (204 kph) winds.

Ida late Saturday and early Sunday feasted on an eddy of what’s called the Loop Current, going from 105 mph winds to 150 mph winds (169 kph winds to 241 kph winds) in just eight hours. The Loop Current is this deep patch of incredibly warm water. It takes warm water off the Yucatan Peninsula, does a loop in the Gulf of Mexico and spins up the eastern edge of Florida into the Gulf Stream. Water above 79 degrees (26 degrees Celsius) is hurricane fuel.

RELATED: 4 killed in storm-related incidents in Montgomery and Bucks counties, including woman hit by tree

Normally when a storm intensifies or stalls it takes up all of the region’s warm water and then hits colder water that starts to weaken the storm or at least keeps it from further strengthening. But these warm water spots keep fueling a storm. Katrina powered up this way and so did Ida, gaining power over an area with hurricane fuel more than 500 feet (150 meters) deep, "just a hot tub," according to University of Miami hurricane researcher Brian McNoldy.

In a region that had been warned about potentially deadly flash flooding but hadn’t braced for such a blow, the storm killed at least 46 people from Maryland to Connecticut on Wednesday night and Thursday morning.

Officials said at least five people died in Pennsylvania, including one killed by a falling tree and another who drowned in his car after helping his wife to escape. A Connecticut state police sergeant, Brian Mohl, perished after his cruiser was swept away. Another death was reported in Maryland.

Ida stands as the deadliest hurricane in the U.S. in four years.

"Overall, more than 1,800 people lost their lives as a result of Hurricane Katrina. More than 1,500 death occurred in Louisiana, around 230 in Mississippi, and 14 in Florida. Katrina is the third deadliest hurricane in U.S. history," according to the case study.

While Hurricane Katrina came with its disadvantages such as failed levees and massive evacuations and relocating hundreds and thousands of Louisiana residents, Hurricane Ida hit at a time when cases and hospitalizations for COVID-19 are hitting uncomfortably high numbers.

Ida struck as hospitals and their intensive care units were filled with patients from the fourth surge of the COVID-19 pandemic, sparked by the highly contagious delta variant and low vaccination rates across the state.

Daily tallies of new cases in Louisiana went from a few hundred a day through much of the spring and early summer to thousands a day by late July. Gov. John Bel Edwards told The Associated Press on Aug. 29 that more than 2,400 COVID-19 patients were in Louisiana hospitals, saying the state was in a "very dangerous place with our hospitals."

The Associated Press and FOX 6 contributed to this report.