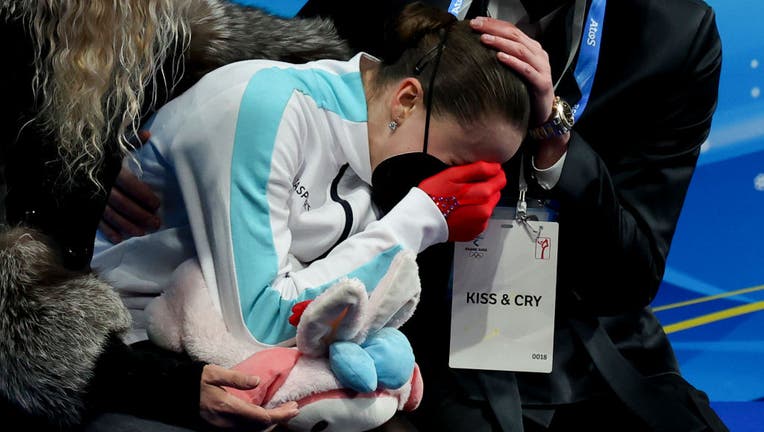 BEIJING, CHINA - FEBRUARY 17: Kamila Valieva of Russia reacts to her score with coach Eteri Tutberidze (L) and Daniil Gleikhengauz (R) at 'Kiss and Cry' during the Women Single Skating Free Skating on day thirteen of the Beijing 2022 Winter Olympic G

BEIJING - The gold medalist said she felt empty. The silver medalist pledged never to skate again. The favorite left in tears without saying a word.

After one of the most dramatic nights in their sport's history, Russia's trio of teenage figure skating stars each enter an uncertain future.

Her Olympics and life turned upside down by a doping case, world record holder Kamila Valieva faces a possible ban and a coach whose first response to her disastrous skate Thursday was criticism.

"Why did you let it go? Why did you stop fighting?" cameras caught Eteri Tutberidze — the notoriously strict coach who will be investigated over Valieva's failed drug test — telling the 15-year-old after she fell twice and dropped out of medal contention.

International Olympic Committee President Thomas Bach said he was disturbed by the intense pressure on the young skaters, particularly Valieva, and criticized her coaches without naming Tutberidze.

"When I afterwards saw how she was received by her closest entourage, with such, what appeared to be a tremendous coldness, it was chilling to see this," he said at a news conference Friday. "Rather than giving her comfort, rather than to try to help her, you could feel this chilling atmosphere, this distance."

Some in skating have pushed to raise the minimum age for participation at the Olympics from 15 to 17 or 18.

As Valieva placed fourth and left in tears, she received a message of support from 2018 silver medalist Evgenia Medvedeva.

"I am so happy that this hell is over for you," Medvedeva posted on Instagram. "I really value you and love you and I’m happy that you can relax now, sweetie. I congratulate you on the end of the Olympics and I hope that you can live calmly and breathe."

Unfortunately for Valieva, she can’t relax just yet. The failed drug test which turned her life upside down still hangs over her head.

While she was allowed to keep skating in Beijing by the Court of Arbitration for Sport to avoid "irreparable harm," that ruling is valid only until a full investigation of her Dec. 25 test for the banned substance trimetazidine is resolved. The case could take months and still cost Valieva and her Russian teammates the gold medal they won in last week's team event.

Runner-up Alexandra Trusova was also in despair after her history-making five quadruple jumps proved not enough to beat teammate Anna Shcherbakova to the gold medal. "I hate this sport," she shouted at the side of the rink. "I won't go onto the ice again."

Trusova said she was happy with the skate but not with the result, an apparent jab at the judging that gave Shcherbakova enough extra points for artistry to keep her ahead.

Trusova could be heard crying that she was the only one without a gold medal. The Russians won the team event using Valieva twice instead of allowing Shcherbakova or Trusova to skate one of the women's programs. That win could be stripped because of Valieva's doping case.

Trusova later said her comments about not skating again had been "emotional", the result of missing her family and her dogs, but didn't commit to compete at next month's world championships.

Of the three teenagers, Trusova has had the most fractious relationship with Tutberidze. She switched coaches briefly, returning to the Tutberidze camp in May of last year. And her music selection seemed to send a message. She danced her long program to "Cruella" from the movie soundtrack.

Shcherbakova seemed unsure how to react the drama unfolding around her, and said she felt sorry for Valieva. "I still don’t comprehend what has happened. On the one hand I feel happy, on the other I feel this emptiness inside."

Shcherbakova arrived in Beijing as the world champion from 2021, but Valieva's record-breaking scores and Trusova's all-or-nothing quads turned her into an underdog to her younger teammates. Being called an Olympic champion was "unreal," Shcherbakova said. "I don’t feel like it’s me they’re talking about."

Russian skaters' careers are typically so short that at the age of 17, Shcherbakova almost immediately faced questions over whether she would retire.

"I have the desire to skate, and I can’t even imagine being without figure skating," she said. The 2026 Olympics are a long way off, and no Tutberidze-trained woman has ever stayed in elite skating long enough to become a two-time Olympian. The last woman to retain the gold was Katarina Witt of East Germany in 1988.

What happens next for Shcherbakova and her teammates-turned-rivals depends on many factors — the eventual doping verdict, any further punishment for Tutberidze and the rest of her entourage and the myriad of injuries which can plague young skaters performing quads.

As she tries to recover from a failure on the sport's biggest stage, Valieva remains at the center of a confrontation between Russia and international institutions. About six hours before she took to the ice, Russian Olympic Committee president Stanislav Pozdnyakov said he would not give up the team event gold medal "under any circumstances, regardless of the results of the disciplinary investigation into the athlete."

Just one of many unresolved questions for the three young Russian skaters.