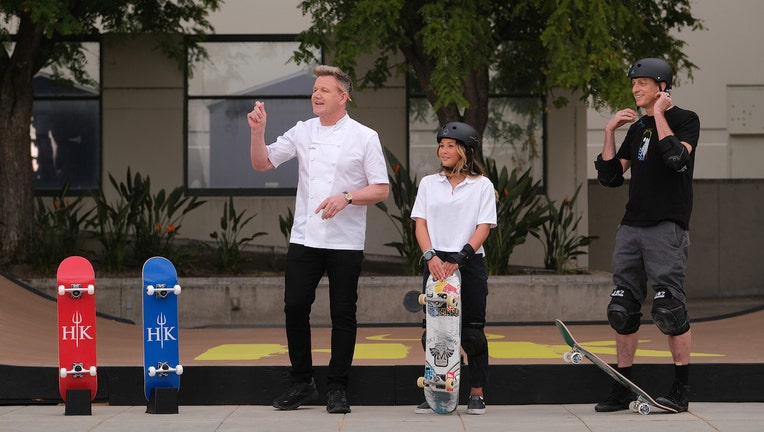 CHICAGO - Welcome back to "Hell’s Kitchen" recaps! The 21st season’s key ingredient is (or should we say was?) an age gap, as "Battle for the Ages" pits twentysomethings against fortysomethings. Miss a week? You can read our recaps, starting with our recap of the premiere, and watch On Demand, on FOXNow, on Hulu and on Tubi, FOX’s free streaming service. This television station is owned by the FOX Corporation.

Nobody likes Billy. He’s too loud! But, like, not in the entertaining way Gordon Ramsay is loud. Billy is annoying-loud. And, according to his teammates, he’s much too aggressive. Alex uses humor to try and temper Billy’s outbursts, but Tara’s not so patient. If he keeps it up, and he will, it’s likely she’ll be even less patient. Soon, he begins cozying to the red team, which Sommer sees as an advantage. The blue team is divided, she argues. Why not exacerbate that? 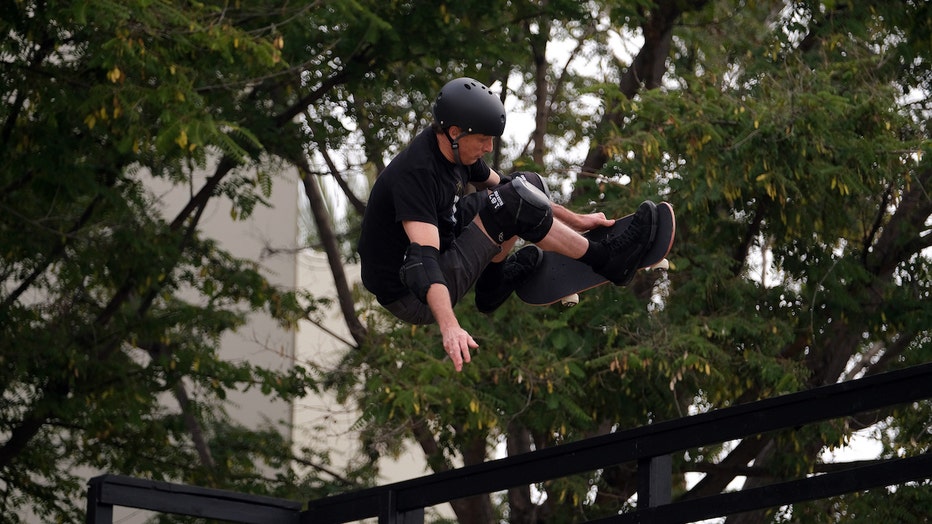 Both teams wake to find helmets, knee pads and elbow pads awaiting them. In the "Hell’s Kitchen" parking lot, they stumble upon a half-pipe and a pair of famous skateboarders. True to the theme of the season, one is old (Tony Hawk, 54) and one is young (Sky Brown, 14). "Love that," Ramsay mutters as they flip, kick and stall. I was genuinely surprised it wasn’t Ramsay up there, what with his TV empire’s penchant for portraying him as a jack-of-all-extreme-sports. He’ll always have his monster truck, I suppose.

To justify the rental of the half-pipe and use of pro skating legends, Ramsay then asks for volunteers who’d like to skate the half-pipe. The red team’s Vlad raises a hand, as does the blue team’s Mindy, who is clearly scared out of her mind, but Ramsay stops them at the last second. "Thank you for your courage," he says. Okay?

WATCH FREE ON TUBI: "The Original Skateboarder" — get the app

In the end, there was absolutely no reason for any of the chefs to wear helmets and pads, but, hilariously, they stay on as Ramsay demonstrates how to break down a whole lobster. Their challenge is to do what he just did: delicately remove every ounce of meat from a whole lobster, claws to legs. O’Shay and Sommer puff their chests, bragging about how they’ve worked in restaurants where they had to do this every day. 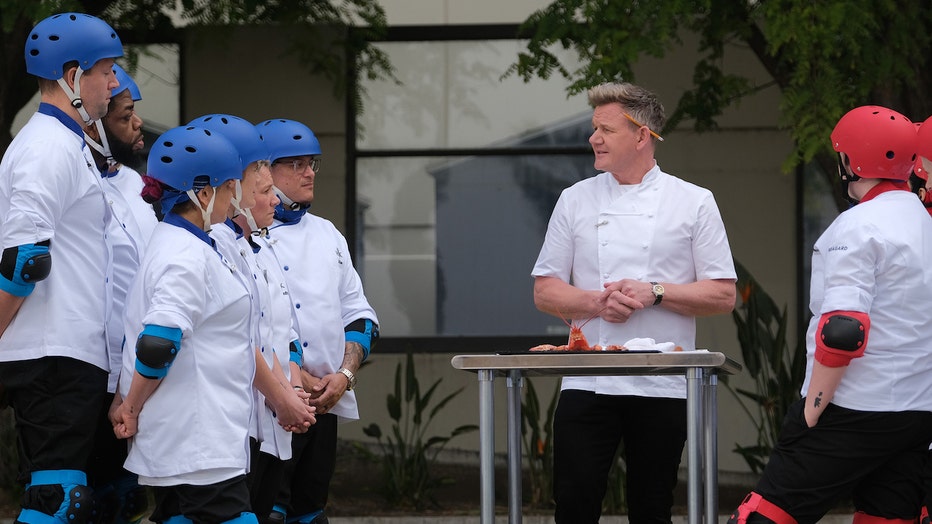 One caveat before judging: Since the red team has two more chefs than the blue team, they must have two chefs sit this one out. That’s good news for Alyssa, who made a mess of her lobster. From there, however, it gets a bit complicated. Sommer, you see, didn’t remove all the meat from her lobster in time, but the meat she did get was butchered with finesse. Ileana, the team’s resident punching bag, finished her lobster, but her cuts are a bit sloppier. Saying that attention to detail matters more than completion, Sommer argues that her lobster should be considered over Ileana’s.

The majority of her team disagrees, but her persistence wins out in the end. Ileana is majorly bummed. She feels the red team has no faith in her after her early losses. (She’s not wrong.)

WATCH FREE ON TUBI: "Lobster War: The Fight Over the World's Richest Fishing Grounds" — get the app

Judging works like this: Ramsay inspects each individual lobster and declares it "in" or "out." Whichever team has the most "in" wins. Alex, Nicole, Mindy, Billy and Abe win over Ramsay, while Tara and O’Shay’s crustaceans are declared "out." Brett, Vlad, Dafne, Cheyenne and Sakari each get an "in" before Ramsay arrives at Sommer’s lobster. The tail, he says, was extracted "beautifully," but no legs? No dice. "Out." Sommer agrees she "shot [herself] in the foot," but it ends up not being a major issue as Alejandro’s perfect lobster cinches them the win.

Their prize is a day spent driving "European-style" go-karts. "The speed of these karts is just off the charts," says Ramsay. "Please be careful." Before they burn rubber, though, the team gathers to address their "small failures," specifically the tension between Sommer and Ileana. Ileana says forcing her to sit out makes her "look like a turd" and Alejandro encourages her to stand up for herself more.

The topic then pivots to Alyssa, who gets called out for her "negativity." Caught off-guard, Alyssa says it felt like the whole team "flipped a switch" and turned on her simply because she’s "outspoken." Thankfully, she turns those hurt feelings into fuel once they hit the racetrack, smoking the competition.

The blue team’s punishment might be one of the worst I’ve seen on "Hell’s Kitchen." First, they’ve got to sift through fish guts in order to make stock for Ramsay’s seafood risotto. Then, because the rice delivery got "a little screwed up," they’re given tweezers to separate all the wild rice that got mixed up with the arborio rice. My fingers cramped up just watching it.

Top performer Alex regrets not using his punishment pass. "Win together, die together," he nobly says to Ramsay, a mantra I think he’ll soon be abandoning. 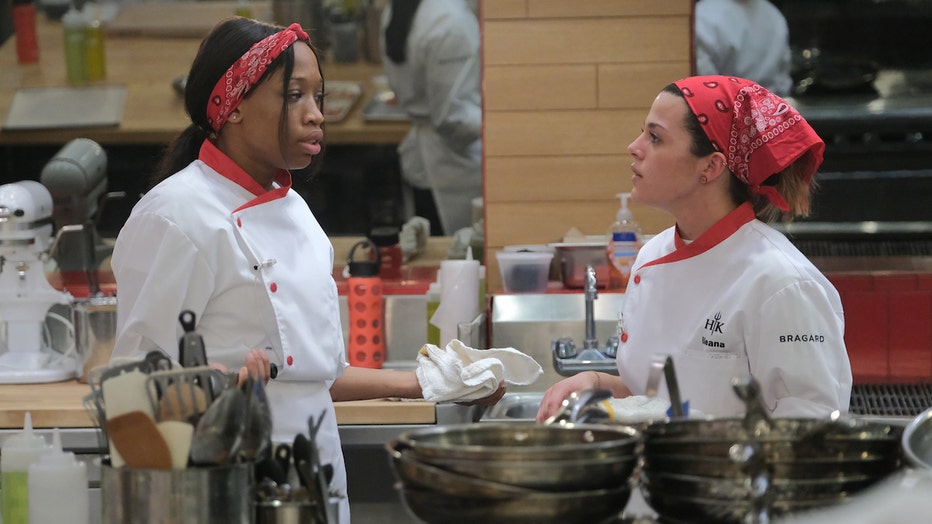 Time for service. Hell’s Kitchen is the "hottest ticket in Tinseltown" and Billy is "f—ing ready," huffing and puffing through the dorms like Popeye post-spinach. Alex, the blue team’s clear leader at this point, tells him to chill. "We need to focus and calm down," he says, placing a strong emphasis on those last two words.

This week, the red team’s greater numbers means Alyssa and Sakari are off the line, instead serving a New England lobster Caesar salad in the dining room. The others are sweating it out in the kitchen, where things get off to a rough start. It’s a communication and timing problem, one that mainly resides on the fish station with Sommer and Ileana. It gets so bad that Ramsay ushers them off to the pantry. "What has gotten INTO the red team?!" he shouts.

He also takes Alejandro to task for "switching off" and bluntly calls Vlad "pathetic" for refusing to voice himself like a leader, but he knows as well as the rest of the team that Sommer and Ileana are the problem. "Sort out a leader!" he shrieks.

WATCH FREE ON TUBI: Gordon Ramsay's 24 Hours to Hell and Back — get the app

The fish station doesn’t improve straightaway. When Ileana tries to step up, it becomes clear that Sommer doesn’t like to take the backseat. "Let me lead, please," Ileana pleads, a meek request that nevertheless allows for a temporary truce. With Alejandro and Vlad both taking Ramsay’s advice, the red team finds its groove and closes service strong. 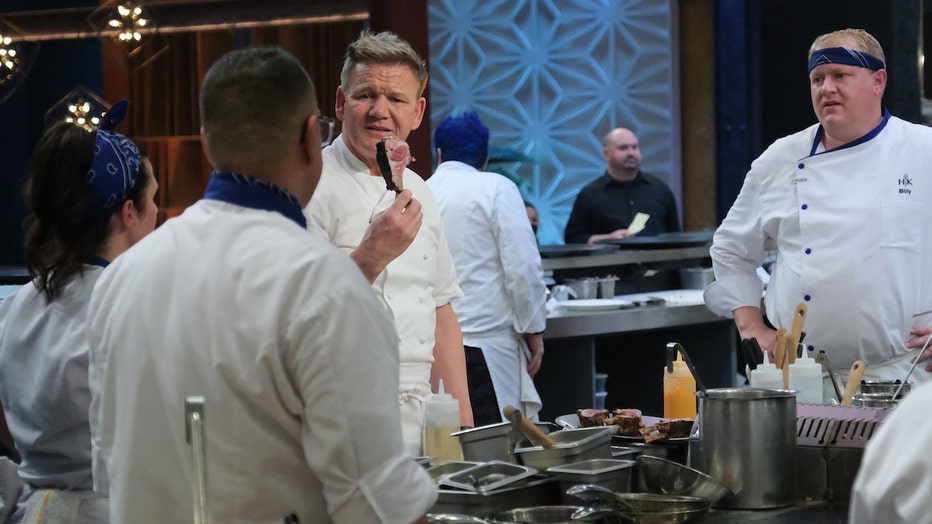 The blue team isn’t so lucky. Right away, Billy begins confusing everyone by bellowing out orders and congratulations with the mealiest of mouths. "Billy makes everybody’s head spin," says Tara. After he starts echoing Ramsay like he were his sidekick, he gets the third degree. "Communicate to your team!" Ramsay scolds, which is clearly code for "get your nose out of my a--."

The result is bad: the blue team only gets out three tables in the first 90 minutes. Much of the blame lands not on Billy, but on the meat station, where O’Shay and Nicole can’t get in step with each other. O’Shay’s calls are always changing and often confused, leaving Nicole unclear when to plate her proteins. This results in plates of raw chicken and New York strip.

Ramsay’s pissed, but it’s when they screw up an order for an English couple celebrating their 40th anniversary that he pulls the plug. "THIS IS A JOKE!" he screams, lamenting the couple’s long wait — which, to be fair, was probably time well-spent since it granted them the chance to see a furious, red-faced Ramsay hurling insults. Why else would you book a table at Hell’s Kitchen? 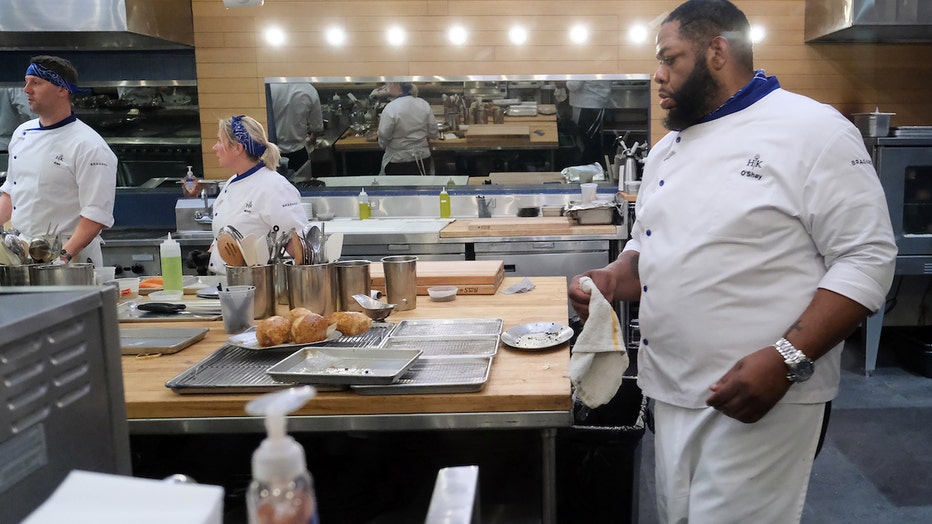 "You’ve gotta cut the fat — quickly," Ramsay tells them, indicating that, once again, he wants the blue team to nominate two losers to send home. Billy leads the charge in throwing O’Shay and Nicole up for elimination, while O’Shay says it should be Billy, who’s been nothing if not consistently inconsistent.

But it’s O’Shay and Nicole who are brought before Ramsay. Tara says O’Shay was "lost" on the meat station, while Nicole demonstrated a lack of confidence and communication. Nicole is quick to blame O’Shay for her bad night, saying she’s a better chef than him because she actually can communicate. He, on the other hand, was like a "zombie."

O’Shay doesn’t have much to say in his defense, aside from it being a "bad night" and that he deserves to stay because, unlike Nicole, he takes responsibility for his mistakes instead of blaming them on other people.

Ramsay disagrees and sends O’Shay home. "You froze," he tells him. Alejandro says what we’re all thinking: "The blue team is just not good. Sooner or later there’s not gonna be any of ‘em left."

As the chefs decompress in the dorms later, a call comes through. It’s Ramsay. He wants to see them in the dining room. "Chef is f—ing pissed!" Brett yells, which is somewhat confusing since Ramsay sounded perfectly reasonable on the phone. Maybe Brett’s one of those guys who always thinks people are mad at him.

When they arrive in the dining room, Ramsay acknowledges that "one kitchen is dominating the competition" and that it "can’t go on like this." He decides to abandon the season’s entire old vs. young gimmick and just separate them by gender like they do every season. All the remaining women will make up the red team and all the remaining men will make up the blue team. "I am not going to continue serving half the diners in this restaurant," he says.

You’d think he’d give the blue team at least one more week to prove themselves, yeah? Or, let us ponder, maybe they really were just that bad.

About the writer: Randall Colburn is a writer, editor, and podcaster based in Chicago.

"Great British Bake-Off" icon Mary Berry cooks up comfort food in her cozy kitchen, casually coaxing curious cooks into concocting Berry’s favorite recipes. (No, we will not apologize for any of that alliteration.) One season, eight episodes.

How to watch "Hell’s Kitchen"

"Hell’s Kitchen" airs Thursdays at 8 p.m. EST on FOX. You can also watch On Demand or stream online via FOXNow. 13 seasons, including much of the current season, are streaming on Hulu. And Tubi’s Gordon Ramsay channel offers many of Ramsay’s seemingly infinite shows, including "MasterChef," "MasterChef Junior" and "Next Level Chef," his latest.