A shelter cat in Texas was put in solitary confinement after repeatedly escaping and freeing other cats.

HOUSTON - It came as no surprise when Quilty the shelter cat received a slew of adoption requests following a viral Facebook post by a pet rescue center in Texas that showed the feline in solitary confinement after the clever cat wouldn’t stop letting other cats out of their enclosures.

“Quilty will not be contained,” read the post by Friends For Life Animal Rescue and Adoption Organization in Houston. According to the organization, Quilty was put in the shoe after a series of “nighttime escapades around the shelter.”

“If someone out there is looking for a clever cat that gets along with dogs but does not get along with closed doors, we have someone they really need to come and meet,” wrote the shelter.

As the shelter contemplated on an appropriate punishment for Quilty’s repeated transgressions, an update was shared to followers of the confined feline saying that his “review with the parole board was denied, so he released himself of his own recognizance today.”

Following an online campaign by the shelter with the hashtag “#freequilty,” which included merchandise that can be purchased in solidarity with Quilty’s civil disobedience, a true movement was formed, prompting 14,000 people to share the post.

A spokesperson for the shelter said one day, staff arrived on site only to find that the door to their front cat room had been opened, and they were welcomed by a group of cats roaming around the office, leaving a trail of chaos and destruction behind them.

“One of them had peed on the receptionist’s mouse pad. Another had used the donation bin we keep up front as a litter box. Most everything was knocked off the counter,” said the shelter.

When they checked the cameras inside the room they immediately saw that Quilty was the guilty party.

Staff said they had developed various methods of containing Quilty and invented alternatives to the door handles, to no avail.

“Quilty was incredulous,” added the shelter. They even went so far as to purchase a child lock which they said mysteriously disappeared before they could install it. 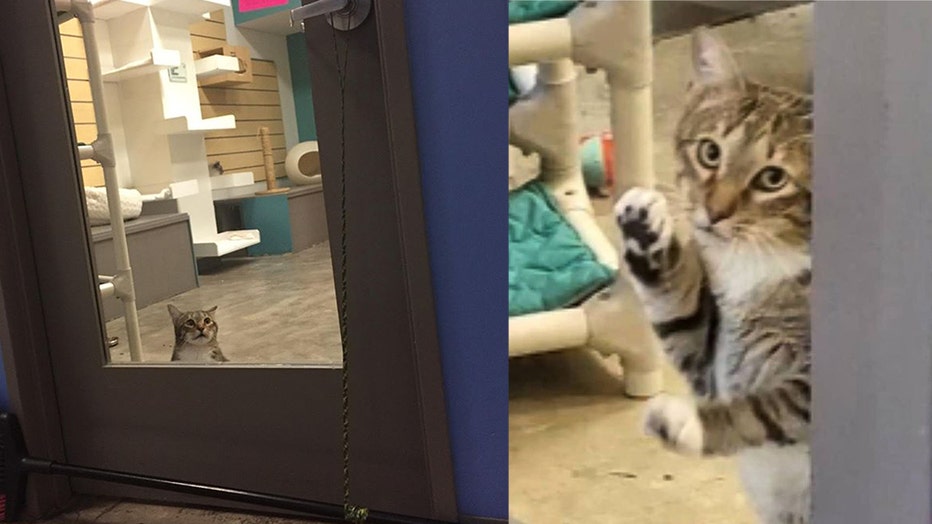 Quilty the cat pictured in solitary confinement after he helped other cats escape. ( Friends For Life Animal Rescue and Adoption Organization).

Before the second child lock could be installed, Quilty was moved to an integration room which is a common place for all cats who are transferred between living quarters, but it took no time at all for Quilty to escape once again.

Quilty has since found a family who thinks they can contain the infamous furry escape artist if the seven-day trial works out between them.

The shelter believes Quilty has found a new forever home and is not encouraging any more applications but says there are tons of other sweet and lovable pets that may have been key accomplices in Quilty’s antics.

Quilty’s new family may try their best to keep him in one place, but would do well to heed the shelter’s warning: “He will not be contained.”