A mural for the Gainesville, Florida man who lost his eye after a K-9 attacked him was vandalized with swastikas.

A mural for the Gainesville, Florida man who lost his eye after a K-9 attacked him was vandalized with swastikas.

Someone spray-painted swastikas, and "God Bless Derek Chauvin" on a mural calling for justice in the case involving Terrell Bradley who lost his eye following a traffic stop in Gainesville last month.

"This is an actual symbol of Nazism, of hate, of genocide, then it said ‘God Bless Derek Chavin,’ the officer convicted of murdering George Floyd," said Danielle Chanzes who helped paint up the mural. "It’s really showing this opposition isn't just people saying ‘He shouldn’t have run.’  These are real people who align themselves with the ideology of white supremacy."

According to Gainesville Police, an officer tried to stop Bradley for a traffic violation two weeks ago. The officer said he saw contraband and that he believed Bradley was acting suspiciously. The officer patted Bradley down when they say he resisted by physically contacting the officer and ran away. Police say there were loaded guns in his car and when the officer ran his name they saw he was a convicted felon. Officers were looking for him with a K9 when the dog found him behind bushes and took him down. 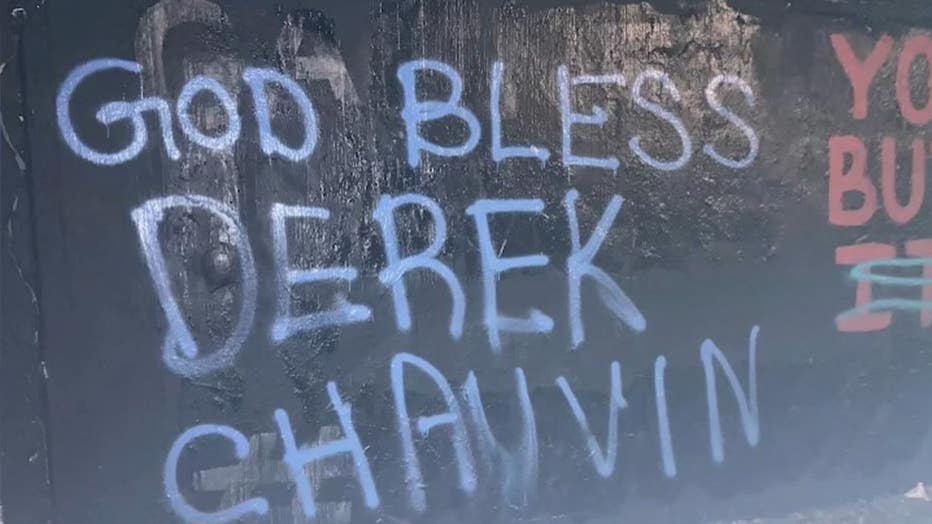 "No one is trying to say ‘no Terrell isn’t a felon, that there wasn’t a gun found,' those are facts, but it doesn’t justify what happened to Terrell," said Chanzes.

Bradley previously told FOX 35 News that he ran away because the officer was acting aggressively from the start, and he felt unsafe. Many are calling for the body camera video, in this case, to be released.

"All we ultimately want to know is, did what happened to Terrell have to happen? And we believe no, and we just want to make sure it doesn’t happen to anyone else. That’s what justice looks like in our eyes," said Chanzes.

The Gainesville Police Department reviewed the case because of the seriousness of the injuries and decided the K9 needed to be temporarily removed. The department's K9 deployment policy will also be reviewed.

Last weekend, there were bags with corn kernels and antisemitic flyers spread across a Gainesville neighborhood.