The biggest issue for Atlanta voters this election is…

A group of voters in Atlanta completed the sentence regarding what issues are most important to them in 2020.

ATLANTA - For years, Lori Geary has heard Georgia Democrats claim “this is the year we turn Georgia blue.”

Geary is a political analyst who covers politics in the Peach State. She’s the host of WAGA’s weekly public affairs show "The Georgia Gang."

Those decades-long Democratic hopes of flipping Georgia blue have yet to reach fruition. But unlike previous years, recent polling and candidate actions suggest Georgia is in play this election cycle.

And it’s not just the White House that’s up for grabs.

And in the Senate special election, Quinnipiac found Democrat Raphael Warnock leads the crowded field competing for the seat held by Republican Sen. Kelly Loeffler, who was appointed in December 2019. 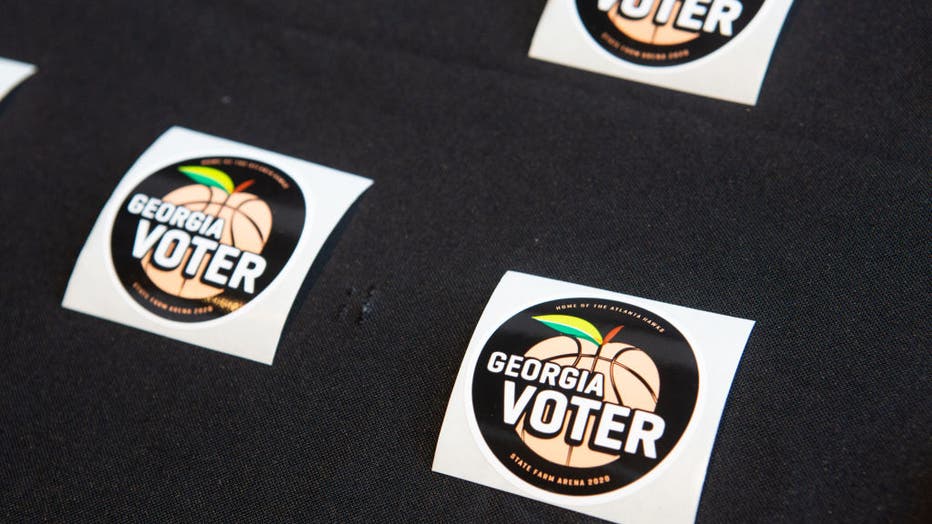 Georgia voter stickers are laid out inside of State Farm Arena, Georgia's largest early voting location, for the first day of early voting in the general election on Oct. 12, 2020 in Atlanta, Georgia. (Photo by Jessica McGowan/Getty Images)

Warnock, sporting an endorsement from former President Barack Obama, had 41% of the vote. Loeffler had 20% while her Republican challenger Rep. Doug Collins garnered 22%.In the final weeks of the campaign,

Trump rallied voters in Macon on Oct. 16, trying to maintain his grip on the state he won by five points in 2016.

Democrats canvassed the state with vice-presidential nominee Kamala Harris visiting Atlanta on Oct. 23, and Biden doing the same on Oct. 27.

This type of attention makes it clear Georgia’s 16 electoral votes and Senate seats are a coveted prize. But how has this southern state, in a region typically dominated by conservative politics, come so close to slipping from Republican hands?Well, like much of the south, the very fabric of Georgia is changing.

As evident in census data from the last 40 years, Georgia is growing.In the 1980s, Georgia had enough residents for just 10 seats in the U.S. House of Representatives. After the 1990 census, that grew to 11.

In the 2000s, it rose again to 13. And after the last census in 2010, Georgia climbed to 14 seats.“Where are these people coming from? Well, some are coming from other nations. And a number of them are moving in from other parts of the country,” Dr. Charles S. Bullock, III explained.

Bullock is a professor of public and international affairs at the University of Georgia. He said the south of today is not the old south. Certain states along the eastern seaboard and parts of Texas have seen much more growth than the rest of the country, Bullock explained.

That is why North Carolina, Virginia and now Georgia are becoming vastly more competitive than their slow-growth neighbors — like Alabama, Mississippi and Arkansas.“When you move, you take all of your personal belongings,” Bullock said, “but you also take your party identification and all your religious preference and those kinds of things with you.”

Neither Bullock nor Geary expect Georgia to gain any more seats after the 2020 census, which Bullock said is because of poor response by Georgia residents.

According to Geary, Georgia attracts new residents with its reputation for providing promising business opportunities and an emerging place in the entertainment industry.

“We get people moving here from all over the country, especially the Northeast. We are also the No. 1 place for film production, bringing many folks from the film industry to Georgia,” Geary said.

Most of the growth has come in the more urbanized areas, like Atlanta, Augusta, Columbus and Savannah. Bullock said younger people, who tend to be more liberal, are populating those areas.

Republican strongholds remain in rural Georgia, which is home to older and more conservative voters. Even so, Bullock said their grip on power is fading along with an aging population.“Essentially, what we’re seeing is the Republicans are dying and their grandchildren are voting for the Democrats,“ Bullock said.

Aside from age, race and education play a role in determining a voter’s political preferences. Bullock said minorities tend to vote liberal while White men are more likely to be conservative.

He said White women, particularly those with a college education, are likely to be the undecided voters. That demographic played a major role in Trump’s 2016 victory, but Bullock said they may not fall his way this cycle.

Democrats had been losing control in Georgia since 1992. In 1990, they held the governor’s mansion, two Senate seats and all but one (District 6) of the 10 congressional districts.

But after redistricting, Republicans grabbed four of the 11 House seats and one of the Senate seats in 1992. Two years later, the GOP held seven. And in 1996, they held eight.

Lost in those numbers is the fact that Bill Clinton, a Democrat, actually carried Georgia in the same 1992 election where Democrats started losing seats in Georgia. 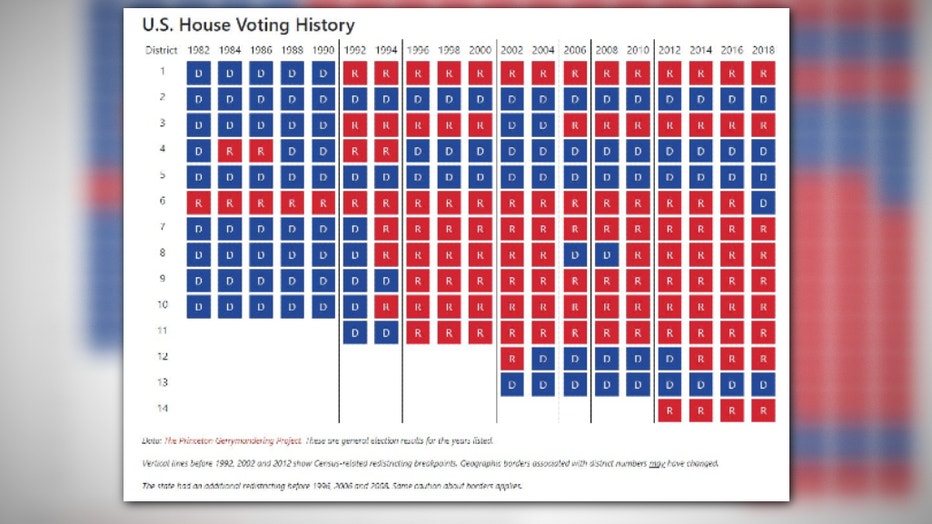 In 2002, the sweep was complete. A Republican lived in the governor’s mansion and two sat in the Senate.

Republican power peaked in 2014 when they captured 10 of the 14 congressional districts.

Geary said Independent voters allowed conservative politicians to take control of the state, beginning in 2002.“That was enough to shift most of the statewide offices to Republican where they have remained since,” she said.

Even so, Geary recognizes a shift in their ideology. For the last couple of elections, the independent voters have begun to lean more moderate.

For proof, look at the 2018 midterm elections.

Prior to the 2018 midterms, Republicans controlled the White House, the House and the Senate.

Democrats had high hopes on the election, their first chance at retaking control in Congress and curbing some of Donald Trump’s power. They even described it as “The Blue Wave,” which was headlined by rising stars in the south like Texas’ Beto O’Rourke, Florida’s Andrew Gillum and Georgia’s Stacey Abrams.

Abrams was the Democratic nominee for governor. Prior to Abrams, Geary said Democrats tried to win back the voters they’d lost in years past with moderate policies.

“That strategy failed for both Michelle Nunn and Jason Carter. Stacey Abrams proved you could run more to the left and be successful,” Geary said.

Abrams bolstered her campaign with invigorated young voters. Bullock said Abrams was a skilled fundraiser, which allowed her to get her message out much more effectively than Roy Barnes, the 2010 Democratic nominee for governor. 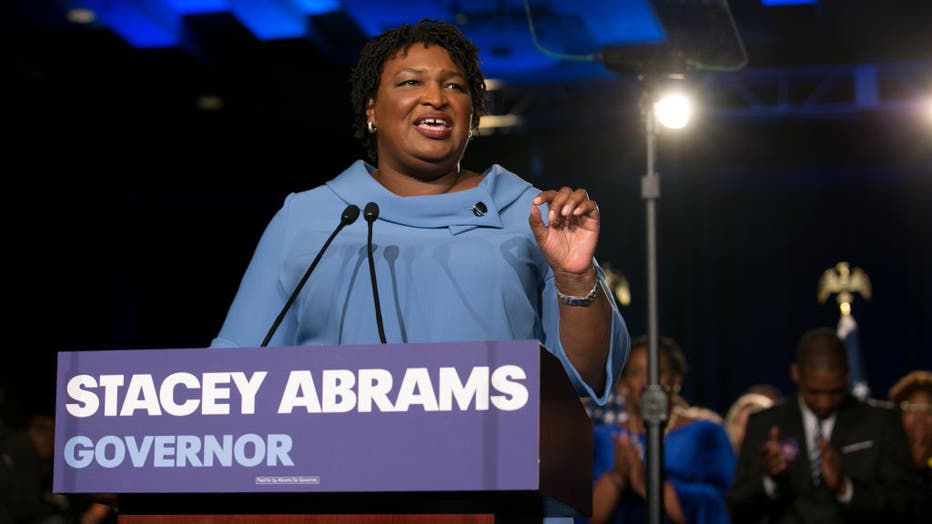 It nearly carried her to a victory, but she ended up losing by just 1.4%.

“Although she lost in 2018, she moved the Democratic needle more in Georgia than we have ever seen since the 1990s,” Geary said.

Even though it was over, and “The Blue Wave” was limited to Democrats taking control of the House, Abrams’ race stayed in national headlines.

She accused her opponent, then-Secretary of State Brian Kemp, of voter suppression.

RELATED: Claims of voter suppression and 'illegals' in Georgia

Kemp’s office allowed him to oversee his own election. Geary said secretaries of state often blame voting issues on the individual counties, who run the elections.

“While that may be true, the perception is if you are Secretary of State, the buck stops with you because you are the elections chief,” Geary said.

But Abrams kept her profile high, spending much of her time fighting against future voter suppression.

In 2020, once it was clear Biden would be the Democratic nominee, Abrams made it known she wanted to be his running mate.

RELATED: Atlanta is home to 2 potential contenders for Biden’s VP

At one point, she was under consideration, as was Atlanta Mayor Keisha Lance Bottoms. Bullock said putting either of them on the ticket might have ensured Georgia voted blue in November. 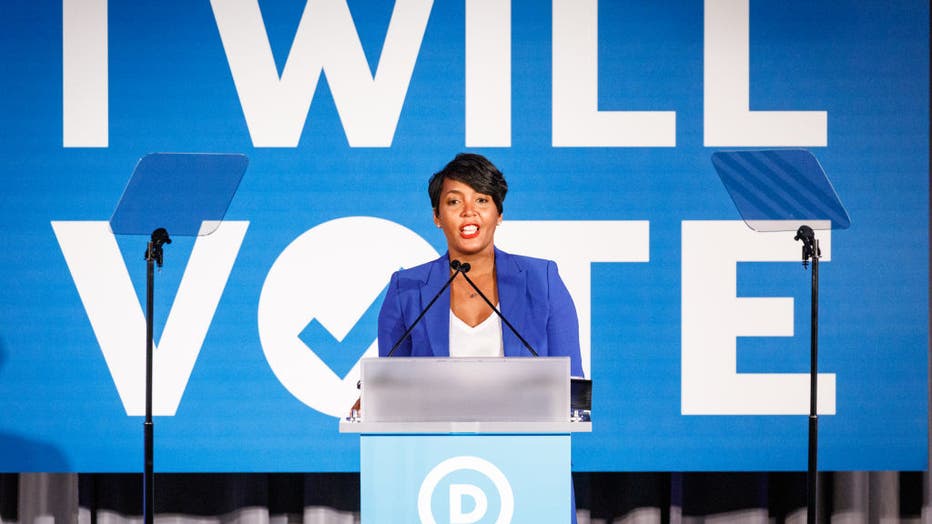 In the end, Biden chose Kamala Harris. But Georgia’s shifting demographics may give Biden a path to the Peach State anyway, as evident by what happened in District 6.

Centered on a suburb to the north of Atlanta, District 6 had sat firmly in Republican hands for decades. But in 2018, Lucy McBath took it from Karen Handel, flipping the district to the Democrats.

“I believe Congresswoman Lucy McBath had a strong message for suburban voters,” Geary said. “While suburban voters’ disapproval of President Trump played a part, McBath ran on healthcare and putting an end to gun violence. Both of those issues resonated with moderate voters who were turned off by President Trump’s demeanor.”

The two are set for a rematch in November, but Geary doesn’t see Handel’s fortunes changing.

“Former Congresswoman Karen Handel has a solid following in this district but it will be difficult for her to defeat an incumbent who has deep pockets and the support of many moderate suburban women,” Geary said.

Only one of Georgia’s U.S. Senate seats was supposed to be on the ballot this cycle. But Republican Sen. Johnny Isakson’s retirement last year threw the future of his seat into contention.

Gov. Kemp appointed Kelly Loeffler, another Republican, to fill his seat, beginning in January 2020. But the law called for a special election in November to determine who would serve the remaining two years of Isakson’s term.

Despite being the incumbent, Loeffler has a tough path to victory. Bullock said Senate appointees aren’t doomed to failure, but they face a more difficult election.

Bullock said Collins raised his profile significantly amid Trump’s impeachment proceedings in January. He said being the president’s chief defender in the House added steam to Collins’ Senate ambitions.

Had Collins not gotten into the race, Loeffler would have been the frontrunner, Bullock said.

With the conservative vote split, Rev. Raphael Warnock has emerged as the Democratic frontrunner. Warnock is the senior pastor of Atlanta’s Ebenezer Baptist Church, the church once pastored by Dr. Martin Luther King Jr.

He has the support of the Democratic establishment in Washington and is able to coalesce support around him while Loeffler and Collins duke it out, Geary said.

Recent polling has Warnock leading both his Republican counterparts, but unless he can get 50% of the vote plus one, the race is headed to a runoff.

As for the other seat, held by a key Trump ally, Sen. David Perdue is facing the daunting task of running ahead of the president, Bullock said.

A president traditionally provides a boost to the rest of his party’s ticket. But President Trump has fallen out of favor with a lot of moderate voters who swung his way in 2016, Bullock said.

With fewer split-ticket voters today than there used to be, Bullock said voters are likely to vote along party lines, meaning Trump’s success in Georgia would more accurately be attributed to Perdue.

For evidence, Bullock points to the Republican primary election in June. Both Trump and Perdue run unchallenged, but Perdue earned 45,203 more votes than Trump in their respective races.

Perdue is facing a challenge from Jon Ossoff, who has proven to be a gifted fundraiser.

Like Warnock, Ossoff landed an endorsement from Obama and recent polling shows him leading the incumbent.